A Battle to Breathe

An infant in an Arctic village struggles to get air into his lungs. Without the necessary medical equipment, is diagnosis futile? 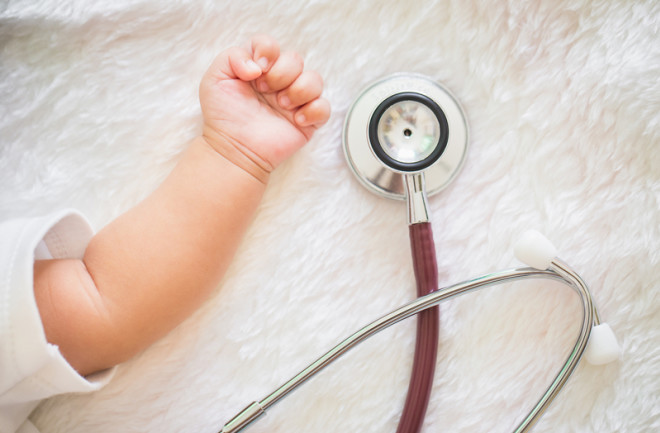 Another day of work at a small village clinic in northern Alaska was coming to a close. The final patients filed out the door as I wrapped up my clinic notes. The setting Arctic sun cast an orange glow on the snow dusting the remote village’s lead gray beaches. The days were becoming rapidly shorter as winter approached, and I sat back and imagined the Arctic Ocean, just outside the clinic windows, under a sheet of ice in just a few months.

An elderly woman walked in carrying an infant wrapped in blankets.

“He’s been breathing funny,” she said, her face completely calm.

I lay the tiny 6-week-old Inupiat boy on the exam table and removed his one-piece outfit. Michael was struggling to breathe. His respirations were rapid, and with each inhalation his nostrils flared and the muscles between his ribs strained for air. In my pediatrics training, one of the most important observational skills I learned was to determine a child’s “work of breathing” — that is, how hard the muscles of the thorax are working to bring air into the lungs. This infant’s “funny” breathing had him working very hard, and something was dangerously wrong.

In my five years as a pediatrician, I had seen many infants struggle in the same way as Michael. But I was used to working in large academic hospitals equipped with full diagnostics and a pediatric intensive care unit never far away. Many of those children ended up needing intubation and a ventilator to breathe for them. But here in a small Arctic village with no road access, the boy’s heavy breathing seemed much more urgent.

The nearest pediatric ICU was hundreds of miles away in Anchorage. Even a simple X-ray machine, which could help determine what was going on inside the boy’s hidden lungs, was hours away by airplane. I saw darkness coming on quickly out the window, and the cold, choppy sea beside the clinic fed my sense of dread. I realized that if the weather were to turn bad, there was no possibility of evacuation.

I put aside my fears and focused on using what I had on hand to figure out what might be causing this little boy’s battle to breathe. His oxygen level was normal, so he did not need emergency evacuation or any immediate intervention.

“How long has he been breathing funny?” I asked his grandmother.

“Since he was born,” she said with certainty.

Could he have pneumonia? Pneumonia is a bacterial infection that fills parts of the lungs with pus, thereby preventing oxygen from reaching the blood. The body responds by breathing more deeply and rapidly to take in more oxygen. I had seen many children with pneumonia, and they breathed in the same way as this infant, using all the muscles of the chest wall. Pneumonia is one of the most common infections of childhood and can be deadly.

I placed my stethoscope against the infant’s back and heard completely clear breath sounds — no areas of bubbling pus to suggest pneumonia. The village nurse reported that his temperature was normal. The lack of fever and his clear-sounding lungs, and the fact that he’d breathed this way since birth, made pneumonia less likely, but not impossible. The grandmother watched me as I continued with my physical exam, peering into his throat and each ear.

Could Michael have a metabolic condition causing his respiratory distress? If he were born with an absent or dysfunctional enzyme, his aberrant metabolism could be building up dangerous acidic substances. Acids in the blood activate one of the body’s primary pH buffer systems — heavy breathing, just as he was doing.

With the possibility of a metabolic disease in mind, my thoughts moved toward what might happen in the coming hours or the following day. Children with metabolic conditions often become progressively and rapidly more ill. Pediatricians use the term crash to describe how precipitously the clinical condition of these children can decline, resulting in the need for intensive care. Was his heavy breathing just the first sign of impending doom?

Diagnosing metabolic disease would require extensive testing in a laboratory much better equipped than we had in the village clinic. Putting thoughts of his “crashing” aside, I returned to my physical exam. I put my stethoscope to Michael’s heart and, through it, heard a loud and harsh whooshing sound — a heart murmur. This could be a significant clue.

Although soft, melodious murmurs are common in perfectly healthy children, the boy’s grating and cacophonous chest suggested heart disease, and a reason for his troubled breathing. That murmur might have been the sound of blood flowing turbulently and reverberating as it passed through malformed structures within his heart. If this boy was born with a heart defect, his abnormally assembled heart could be failing to keep blood flowing forward, thus allowing it to back up into the lungs, flooding them with fluid. His breath sounds were clear and dry to my ears, but to truly assess his heart, Michael would need an ultrasound (an echocardiogram). And the nearest ultrasound machine was far away in Anchorage.

I continued my detective work, gathering as much evidence as possible. I felt for the artery in the crux of his elbow and counted a normal pulse rate. Gently turning his head to each side, I looked for bulging veins in his neck but saw none. I pressed my hand deeply into the right side of his dainty abdomen and felt the feathery edge of a normal-size liver. My hands reached down and pressed on both of his shins — they were warm, and my fingers left no impression in his slender legs, showing there was no fluid buildup. All of these findings reassured me that, if Michael’s heart was failing, it was not yet at a dangerous stage.

“Has he been eating and growing well?” I asked the grandmother. Poor eating in an infant could be a sign of congenital heart disease. Heavy breathing can interfere with drinking and taking in enough nutrition, and a heart working overtime to compensate for structural inefficiency burns off extra calories — both contributing to slower growth. His grandmother insisted he was emptying many bottles of formula each day and growing well. As if to demonstrate, she put a bottle to Michael’s mouth, and he began voraciously feeding.

I asked the nurse to pull up the boy’s growth chart — she had recorded his weight every week since birth and plotted it against a curve that showed normal, expected weight gain in babies. It showed Michael steadily gaining weight since birth, but there was a subtle flattening to the rising curve. His weight was increasing, but too slowly. The pieces of the picture were starting to come together.

I crossed the exam room, heading for the telephone on my desk. I had a direct line to specialists in Anchorage with whom I could discuss cases while in isolated towns and villages. Within a few minutes, a pediatric cardiologist got on the phone. I told the boy’s story, explained my physical exam findings and attempted to describe the murmur.

“His story is concerning for congenital heart disease,” he said. Although we could not know for sure at the time, we agreed that I would treat Michael empirically. I gave him a small dose of a medication to draw fluid out of his lungs. Meanwhile, the nurse made several phone calls to schedule a bush plane to fly him out at first light.

The next morning, a small plane taxied across the snow-covered runway beside the clinic as dawn tinged the eastern sky. I saw Michael’s grandmother on the back of a four-wheeler headed out to the waiting plane, a bundle of blankets cradled in her arms. I watched the plane taxi, and then abruptly speed up and take off. As I learned later, the plane brought them to the nearest town with an emergency room, where an X-ray showed an enlarged heart and the markings of fluid in the lungs — both strong signs of congenital heart disease. They flew on to Anchorage the following day, and an echocardiogram showed a hole right through his heart’s septum between the left and right ventricles, a ventricular septal defect (VSD).

The pediatric cardiologist caring for him in Anchorage continued to draw out the extra fluid from his heart and lungs, and fortified his formula for better growth. VSDs often close on their own, but if his remained open months later, he would need it sealed shut through surgery.

In the meantime, Michael and his grandmother returned to their Arctic village, far from hospitals and doctors. I had a trip to the region planned for the following year and would check up on his progress during my next stint as a physician north of the Arctic Circle.