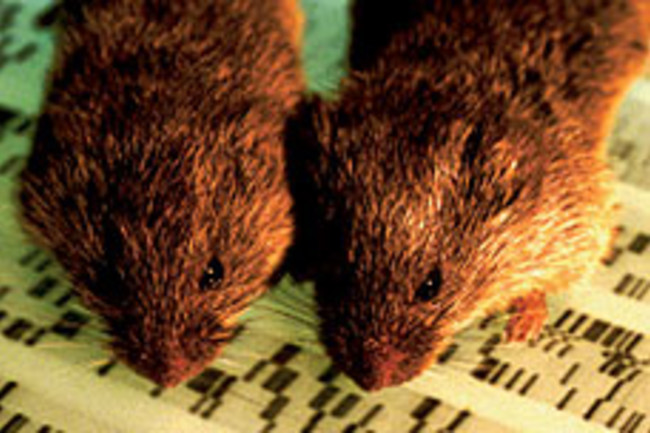 Nature got a boost in the ongoing nature-versus-nurture debate this year when researchers at Emory University in Atlanta announced they could turn promiscuous male rodents into faithful cuddlers by manipulating a single gene.

The research focused on two related species of vole: prairie voles, which are about as close as mammals get to being monogamous, and meadow voles, which express little interest in each other after copulation.

Neuroscientist Larry Young and his colleagues reported that the important difference lies in the location and quantity of a molecular receptor in the vole’s brain. The receptor receives signals via the hormone vasopressin, which modulates male social behavior in a wide variety of mammals. In voles, this behavior includes recognizing the specific scents of other individuals, including potential mates. In pair-bonding prairie males, the receptor is abundant in the ventral pallidum, which processes rewards, while promiscuous meadow males have much less of the receptor.

“When those monogamous species mate,” Young says, “they actually learn to make an association: ‘Wow, this feels good, and I’m with her.’ ” In contrast, nonmonogamous males don’t connect mating with their partner. “They just remember, ‘This was a female, and I want to do this again.’ ”

By injecting the gene for the vasopressin receptor into the ventral pallidum of promiscuous voles, researchers were able to make the cells in that area produce levels of the receptor comparable to those of monogamous species. The genetically altered voles spent as much time snuggled up next to their mates as did their pair-bonding cousins.

Young says studies like this can help reveal how certain social behaviors may have evolved. For voles, the profound lifestyle change seems to have occurred when previously separate circuits in the male brain—one for processing social recognition, another for reward—became biochemically linked.