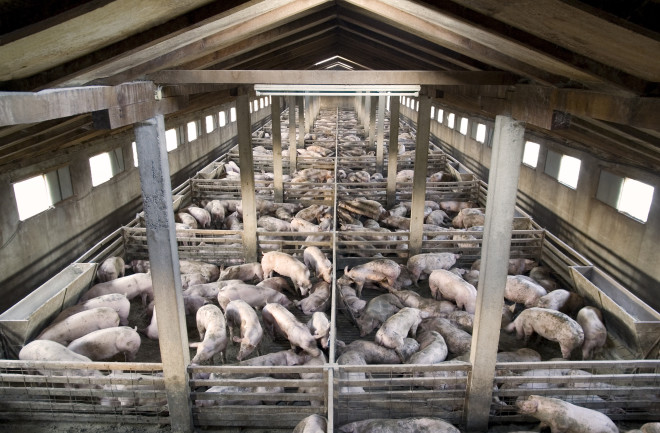 Methicillin-resistant Staphylococcus aureus (MRSA), one of the most dangerous antibiotic-resistant bacteria, is responsible for more than 250,000 hospitalizations a year in the United States alone. And new, even more deadly versions of staph may be on the way, due to intensive use of antibiotics on factory farms. In February scientists reported that a methicillin-susceptible staph had jumped from people to industrially farmed pigs, acquired resistance to the antibiotics the pigs were fed, and jumped back again, having turned methicillin-resistant. The newly minted MRSA strain is an important reminder that overuse of livestock antibiotics could seriously harm human health, says microbial expert Lance Price of George Washington University, who was part of the research team.

After a Dutch baby girl tested positive in 2004 for an unrecognized strain of MRSA, researchers traced the strain to pigs on her family's farm. Genomic analysis has confirmed that it originated in humans and migrated to pigs. Exposed to antibiotics commonly used on pig farms, the bacterium acquired resistance to methicillin and tetracycline before jumping back to humans. Price sees this news as another warning to livestock farmers. "I truly couldn’t design a better system for creating drug-resistant bacteria than a concentrated operation where you’re feeding animals antibiotics," he says.