Three scientists that developed treatments for debilitating parasitic infections were awarded the Nobel Prize in physiology or medicine today for their ground-breaking advancements in tropical medicine. 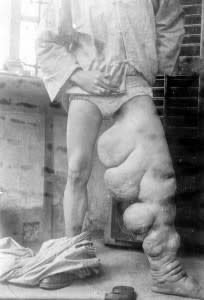 An Indonesian man with elephantiasis caused by Wuchereria bancrofti. The worm resides in the lymphatic channels, usually in the lower extremities, where they interfere with the normal transport of lymphatic fluid and cause obstruction. Image: Tropenmuseum. Click for source.

One half of the prize was awarded to Youyou Tu, a pharmacologist at the China Academy of Chinese Medical Sciences in Beijing. Her work in identifying anti-malarial compounds in the late 1960s was inspired by traditional Chinese herbal remedies. She screened thousands of these treatments, trawling through ancient recipes, and ultimately found success in artemisinin from the wormwood plant Artemisia annua. The drug, which she describes as a "true gift from old Chinese medicine," is currently a mainstay of the treatment regimen for this deadly protozoan parasite and is used by nearly 400 million people every year. Its use can reduce the mortality rate of malaria infection from 20 to 30%.

In 2011, Tu wrote an article for Nature about the discovery and development of the artemisinin extract,

During the Cultural Revolution, there were no practical ways to perform clinical trials of new drugs. So, in order to help patients with malaria, my colleagues and I bravely volunteered to be the first people to take the extract. After ascertaining that the extract was safe for human consumption, we went to the Hainan province to test its clinical efficacy, carrying out antimalarial trials with patients infected with both Plasmodium vivax and P. falciparum. These clinical trials produced encouraging results: patients treated with the extract experienced rapid disappearance of symptoms—namely fever and number of parasites in the blood—whereas patients receiving chloroquine did not.

The other half of the Nobel Prize was awarded to William C. Campbell, a microbiologist at Drew University in Madison, New Jersey, and Satoshi Ōmura, a microbiologist at Kitasato University in Japan. Both Ōmura and Campbell discovered avermectins, a class of compounds that can kill parasitic roundworms that cause crippling diseases, such as lymphatic filariasis, otherwise known as elephantiasis, and onchocerciasis or river blindness.

In the mid-1970s, Ōmura used the techniques of Selman Waksman to identify anti-parasitic compounds from soil bacteria known as Streptomyces and found success in a soil sample from a nearby golf course. (The same laborious technique was also used by two female scientists in New York to identify one of the world's first antifungal drugs.) Campbell identified one such component of Ōmura's cultures that had unique anti-parasitic activity and refined its derivative, ivermectin. Today, the drug has not only reduced the crippling morbidity of these two dreadful diseases but has also successfully interrupted their chains of transmission.

"These two discoveries have provided humankind with powerful new means to combat these debilitating diseases that affect hundreds of millions of people annually," said the Nobel committee. "The discoveries of avermectin and artemisinin have revolutionized therapy for patients suffering from devastating parasitic diseases. Campbell, Ōmura and Tu have transformed the treatment of parasitic diseases. The global impact of their discoveries and the resulting benefit to mankind are immeasurable."

Today's announcement from the Nobel Committee on the 2015 Nobel Prize in physiology or medicine.

"Two female scientists inspired by the humble discovery of penicillin would identify the first known antifungal agent in the mucky soil of a Virginia dairy farm." From the Body Horrors archives, A Weapon From the Soil