Neanderthals apparently suffered from less lower back pain — and if you’ve got a lot of it, you might have more in common with chimpanzees than your fellow humans. 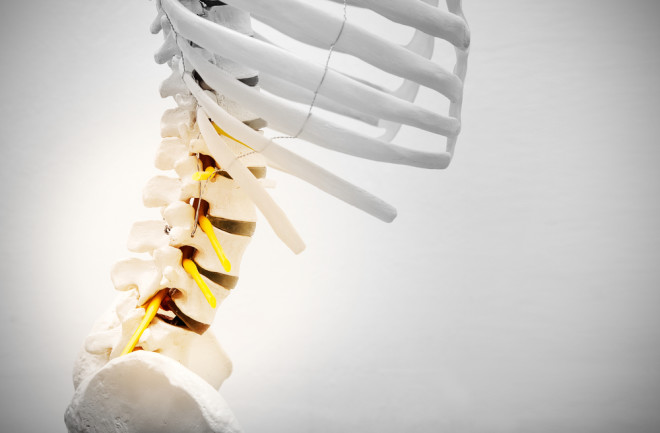 1. Thanks to evolution, your back is a marvel of load-bearing support and flexibility — and kind of a mess. Our species is prone to back pain, for example, because our ancestors’ imperfect transition to upright walking essentially took a spine similar to that of our nearest living relatives, knuckle-walking chimpanzees, and forced it vertical with piecemeal adaptations.

2. A 2015 study found that some people are, well, chimpier than others. Humans prone to certain back problems have vertebrae closer in shape to those of a chimpanzee than those of pain-free humans.

3. Regardless of shape, you might have more (or fewer) of the bones than your neighbor. Not everyone has the standard 33 vertebrae: From top to tail, that’s seven cervical, 12 thoracic, five lumbar, five sacral and four coccygeal.

4. The number of vertebrae in individual Homo sapiens actually varies between 32 and 35, with the biggest range of difference in the pelvic area.

5. The four natural curves in our spines develop at different times. Both the thoracic (midback) and sacral (pelvic), which develop early in embryos, curve outward.

6. The other two curves, which bend inward, become more pronounced at key points in infant development: the cervical curve, when a baby can hold up its head; and the lumbar, when the li’l tyke begins to walk.

7. Every doctor who’s ever examined you puts that ice-cold stethoscope on your triangle of auscultation, a quiet zone in between three major muscles near the base of your shoulder blade, where it’s easier to hear your lungs.

8. Lower back pain, our most common backache, may not have been as big a deal for our Neanderthal cousins. A 2008 study in the European Spine Journal found that the lower spines of two adult Neanderthals showed little of the degeneration associated with a life of heavy physical activity, which we believe they experienced.

9. The secret to Neanderthals’ better back health is apparently a combination of heavier musculature supporting their spines and lumbar kyphosis, a reverse curvature of the lower spine that, in our species, is considered abnormal.

10. The oldest known tattoos, including two on his back, belong to the famous 5,300-year-old Otzi the Iceman, found in the Italian Alps in 1991.

11. Some researchers theorize that Otzi’s “ink” (actually soot) mapped out acupuncture treatments intended to ease a variety of ailments.

12. Most other ancient tattoos, many of which are on the back, appear to be symbolic and represent status or specific achievements, such as the elaborate animals of Siberia’s 2,500-year-old Pazyryk mummies.

13. Bum backs, and remedies for them, have been recorded in the earliest medical documents. An ancient Egyptian scroll known as the Edwin Smith Surgical Papyrus, named after the archaeologist who purchased it in 1862, explains how to diagnose a “pulled vertebra.” Sadly, only partial instructions for treatment are included.

14. The Egyptian scroll’s author may have been concerned with fixing pulled vertebra, but by 2700 B.C., the Chinese were practicing intentional spinal manipulation.

15. Back-cracking was widespread throughout the ancient world — for better or worse. Hippocrates, for example, advocated strapping someone with an abnormally curved spine to a ladder, and then dropping the ladder (and patient) from a height. Don’t try this at home, kids.

16. The modern practice of chiropractic began when Daniel David Palmer, a self-styled “magnetic healer,” claimed to have restored the hearing of a deaf man by popping one of his vertebra back into place in 1895.

17. Palmer believed that a back out of whack — “subluxation,” or vertebral misalignment — causes 95 percent of diseases.

18. A 2012 white paper by the Institute for Science in Medicine, however, declared, “There is no scientific evidence that chiropractic subluxations exist or that their purported ‘detection’ or ‘correction’ confers any health benefit.” Ouch.

19. It’s commonly believed the saying “watch your back” derives from military tactics, but the Oxford English Dictionary doesn’t, ahem, back up this claim: It notes “watch your back” appears first in the 1949 Western novel Milk River Range by Lee Floren.

20. Disagree? Hey, we’re just telling you what’s in the OED so, you know, get off our backs (a saying with roots in the 17th century).