20 Things You Didn't Know About... Sweat

Your health, feelings and diet can change your sweat composition — but your unique sweat fingerprint is distinctly yours 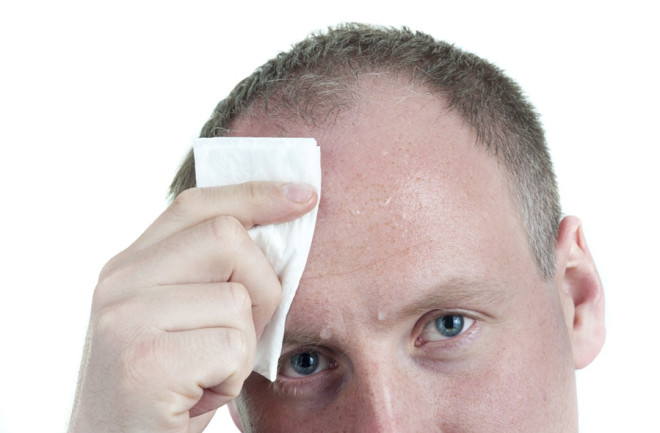 1. Composed of about 99 percent water, sweat evaporates on the skin’s surface, cooling the body and keeping it from overheating.

2. Sweat secretions help you in other ways, too. They include dermcidin, an antibiotic peptide that appears to regulate bacteria growth on the skin and may fight infection.

3. Not all humans sweat equally. Men sweat up to twice as much as women, and both sexes sweat less with age.

4. The sensation of touch can trigger a “sweat reflex” on the opposite side of the body from the spot that is touched. 5 Sweat can trigger other responses: People with atopic dermatitis, a skin condition, can experience an immediate and serious allergic reaction to a fungal protein called MGL_1304 that’s found in sweat.

6. Aside from humans, horses are one of the few mammals that thermoregulate by sweating. Horse sweat is high in latherin, a protein that helps the water in sweat travel from the skin, past the animals’ heavy waterproof pelt and to the air, where it can evaporate and keep them cool.

7. Hippos actually produce a red-colored sweat, which acts as an antibiotic and sunscreen.

8. If you’re sweating red and you’re not a hippo, you might have a rare condition called hematohidrosis. Blood vessels rupture and run into sweat glands in affected individuals, causing them to actually sweat blood.

9. Another rare condition, chromhidrosis, causes humans to sweat orange, blue or other colors. While the condition can sometimes be traced to ingesting certain drugs, the cause often remains a mystery in otherwise healthy people.

10. It’s no mystery, however, why the sweat of healthy people often smells different from that of sick individuals. The body emits volatile organic compounds based on metabolic condition, which can change when disease or infection is present.

11. Cystic fibrosis can be detected with a sweat test. Sodium and chloride are much more concentrated in the sweat of individuals with the condition.

12. Emotions can trigger changes in the composition of your sweat. In an Austrian study, participants wore pads that collected their sweat while watching scary films first, and then neutral films the next day. A second group of volunteers smelled the pads and was able to distinguish which pads were worn during the scary movie.

13. In a similar experiment, female participants judged the sweat of non-meat-eating men to be more attractive than that of meat eaters.

14. Regardless of your health, feelings or diet, your sweat is distinctly yours. While other components of sweat may fluctuate, an individual’s sweat “fingerprint,” a unique blend of 373 volatile compounds, remains consistent over time.

15. Each of us has a unique sweat fingerprint, but the two types of sweat glands, apocrine and eccrine, are universal to humans. We have eccrine glands over most of our bodies, but apocrine glands only in our armpits and genital region.

16. Our bodies produce very little apocrine perspiration, but it’s responsible for most of the odor because it’s high in water and waste products that promote the growth of smelly bacteria.

17. Clear, fluid eccrine sweat, produced in much larger quantities, spreads the apocrine over a larger surface area — and the stench along with it.

18. What to do with all that sweat? UNICEF and Swedish engineer Andreas Hammar teamed up in 2013 to draw attention to millions of people without clean drinking water by creating the Sweat Machine, which pulled sweat from clothing and turned it into potable water through a process of spinning, heating and filtering.

19. The Sweat Machine was more awareness-raising stunt than solution. A sweaty T-shirt yielded just 2 teaspoons of purified water, and organizers admitted there were no plans to mass-produce the gizmo.

20. Maybe the Sweat Machine would have been more productive if they’d used socks instead. A pair of human feet has 250,000 sweat glands, emitting a half pint of liquid every day.