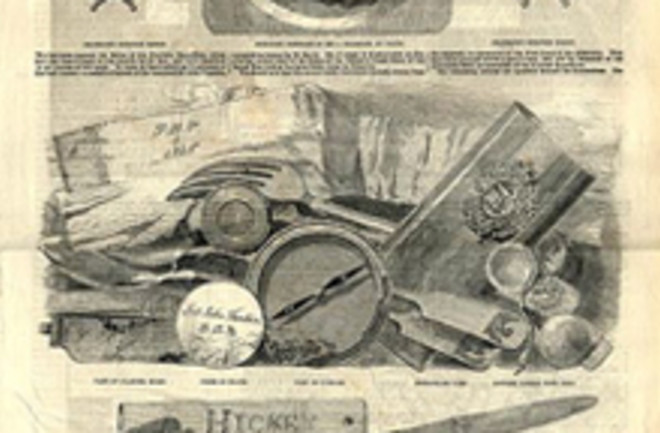 It's amazing what artifacts you can find buried in the ice. (No I'm not talking about that leftover turkey that's been in your freezer since last Thanksgiving. Though if you consider that an historical find, more power to you.) Last month Discoblog brought you the story of the century-old whiskey that British explorer Ernest Shackleton left on Antarctica, which New Zealanders recovered and plan to replicate. Now scientists have analyzed a soup can found in the Canadian Arctic that dates to around the time of the famous Franklin Expedition, and could point to how its members met their doom. Franklin, an Englishman, took two ships on an attempt to sail the Northwest Passage, but disappeared with the loss of all hands, leaving a long-lived mystery about how they died. The soup can, however, shows lead levels "off the scale," suggesting lead poisoning as a likely cause of the expedition's gloomy end. From the Times Colonist:

The can of soup tested at McMaster was left on Dealey Island in 1852 by crewmen from a rescue mission sent to search for the Terror and Erebus. Scientists believe the provisions from the two rescue ships — HMS Resolute commanded by Henry Kellett, and HMS Intrepid captained by Francis M'Clintock — were identical to those supplied for Franklin's expedition, and therefore shed fresh light on a prime suspect from that ill-fated voyage.

Meanwhile, on the other side of the globe, Antarctic historians turned up something interesting in the hut of Robert Scott, the man bested by Roald Amundsen in the race to reach the South Pole in the first years of the 1910s. A block of frozen butter survived the nearly 100 years on the icy continent. Lizzie Meek of the Antarctic Heritage Trust told The Times

"It looked like an old wrinkly bag and you look inside and saw the wonderful Silver Fern logo," she said.

She desribed [sic] the butter's smell as "very pungent."

"What's amazing is how strong that smells," she said. "I'm not sure I'd want it on my toast."

DISCOVER: Living Through the Donner Party