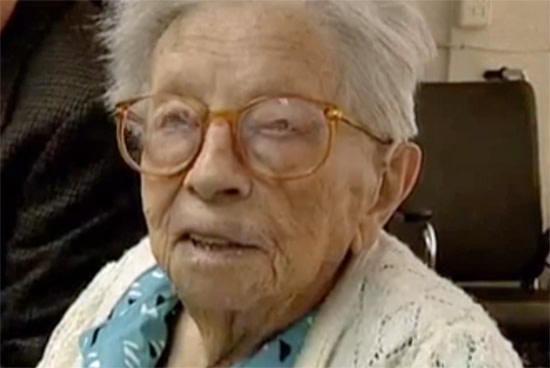 Discovering the secret to a long and healthy life has always intrigued humanity — you need look no further than the nearest magazine rack to see that that fascination is today alive and well. And now scientists have some new hints, thanks to blood samples from one of the longest-lived humans yet to walk this Earth: Hendrikje van Andel-Schipper, who was 115 when she died in 2005. A new genetic analysis of blood and tissue samples collected during her autopsy indicates that life's outer limits might be set by our cells' finite ability to divide.

We are born with up to 20,000 hematopoietic stem cells — cells that give rise to new blood cells — that self-renew in our body every 25 to 50 weeks by dividing creating two daughter cells. These cells differentiate to generate the various types of blood cells in our bodies. About 1,300 of those hematopoietic stem cells are dedicated to creating new white blood cells in our bone marrow. By contrast scientists found that Andel-Schipper's blood, at the time of her death, was being derived from only two active stem cells — suggesting the rest wore out and died. In addition, the telomeres on her white blood cells'chromosomes were extremely short, 17 times shorter than the telomeres in her brain's cells (which rarely divide after birth). This was further evidence that Andel-Schipper's blood stem cells had suffered the ravages of aging. The number of times our stem cells can divide may be the reason our lives are finite, the study suggests. The results were published Wednesday in the journal Genome Research

The Fountain of Youth

As with any study of aging, the question of how these findings might be tapped to help the rest of us live longer and healthier is a central one. And study author Henne Holstege thinks stem cells could be key. She told New Scientist

that the results raise the possibility of rejuvenating aging bodies by injecting people with stem cells saved from early in their lives. Further research is needed to determine whether stem cell exhaustion itself causes mortality or whether it's a side effect of the aging process. But with more and more supercentenarians like Andel-Schipper, they should have a growing group of study subjects in the years ahead.