Scientists have learned a lot about the condition, but mysteries remain. 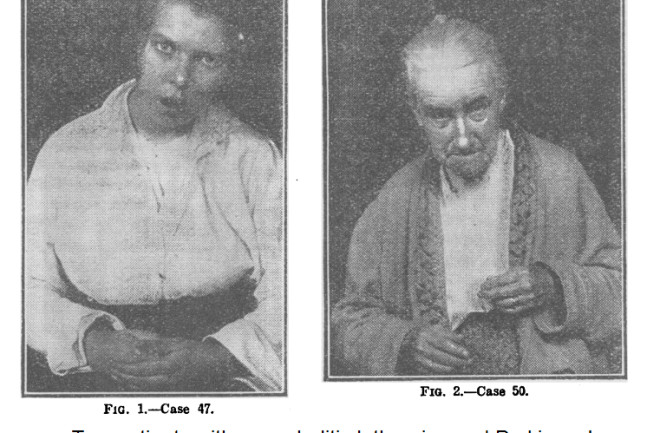 In 1917, at the height of the Great War, a new and mysterious disease emerged into the world, before vanishing a few years later. Although it was to prove less destructive than the 1918 influenza pandemic which occurred at around the same time, the new outbreak had a persistent legacy: some of the victims of the disease remained disabled decades later.

The new syndrome was first reported by Constantin von Economo, a neurologist in Vienna. He dubbed the disease ‘encephalitis lethargica’, after its most dramatic acute symptom — lethargy, or sleepiness.

Patients in the acute phase of von Economo’s disease sometimes slept all day long. Others reported that they would fall asleep as soon as they sat down in a chair. Other acute symptoms included delirium, headache, and paralysis or abnormal movements of the eye muscles. Many patients recovered from this phase, only to face a cruel twist: months or years later, some victims developed severe Parkinson’s-like symptoms.

Last month, the journal Neurology published a new paper marking 100 years since von Economo’s original description of encephalitis lethargica. The authors, Bart Lutters, Paul Foley, and Peter J. Koehler, describe the profound impact that the disease had, not just on medicine, but also on neuroscience.

The sleep symptoms that gave encephalitis lethargica its name were of great interest to von Economo and other researchers as they offered insight into the brain’s sleep centers:

The consistent pathology of the disorder allowed von Economo to localize the lethargic symptoms of encephalitis lethargica to the posterior wall of the third ventricle, near the oculomotor nuclei. Further, he traced insomnia, a disturbance paradoxically encountered in about 10% of encephalitis lethargica cases, more anteriorly, to the lateral walls of the third ventricle, near the corpus striatum.

For von Economo, these clinicopathologic findings confirmed the existence of a subcortical sleep-regulating center. During sleep, this center would actively inhibit the cerebral cortex, reducing the level of consciousness.

von Economo’s hypothesis of a sleep generating center turned out to be not quite correct, however, as it was later discovered that a sleep preventing center (arousal center) actively acts to keep the brain awake. Damage to this region is thought to occur in encephalitis lethargica.

Lutters et al. explain how the outbreak also advanced our understanding of Parkinson’s disease. Post-mortem studies of the brains of patients with post-encephalic Parkinson’s lent strong support to the theory that Parkinson symptoms are caused by damage to the substantia nigra, a much-debated hypothesis that turned out to be correct.

In the 1960s, when it was discovered that the drug L-DOPA is able to reverse the symptoms of Parkinson’s, the drug was tried on post-encephalitic patients, some of whom had remained virtually comatose for 40 years or more. As described in Oliver Sacks’s famous book, Awakenings, L-DOPA produced remarkable effects, although in many cases they were, unfortunately, only transient.