I've blogged in the past about Duke primate scientist Vanessa Woods and now I encourage readers to go visit her newest blog at Psychology Today Your Inner Bonobo where she writes about bonobos, sex, and whatever happens to be on her mind on any given day. Besides being one of my best friends, Woods is a fantastic and funny writer, and her forthcoming book Bonobo Handshake debuts in June. Here's a sample from Tuesday:

'Can animals be gay?' - are you serious NYT?

Having a story about same sex sex in animals then leaving out bonobos is like writing an article about big ears without mentioning elephants.The science of homosexuality in animals (or socio-sexual behavior) and then you talk about albatrosses?? that don't even have a clitoris?? Or do they? the point is, even if they do have them, it's not like you would ever notice. I know the albatrosses are the latest thing, and I love albatross and think it's really cool the female raise babies together, but does that really compete with two females rubbing their clitorises together with ever increasing frenzy until they orgasm - which by the way helps them reduce social tension and live in a world without violence?? I can only think that the journalist a. doesn't know what bonobos are b. got scared by the 2007 New Yorker article saying bonobos don't even have that much sex c. is a lesbian albatross doing her own PR campaign.

And that's just the beginning, so go check it out... 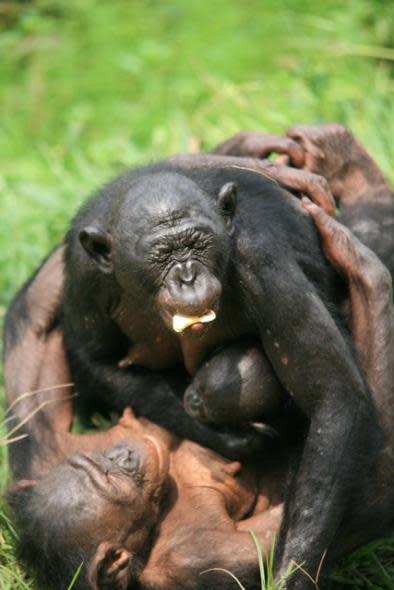