Yes, the ozone hole has grown larger. No, it doesn't mean that humans are off the hook for ozone depletion. 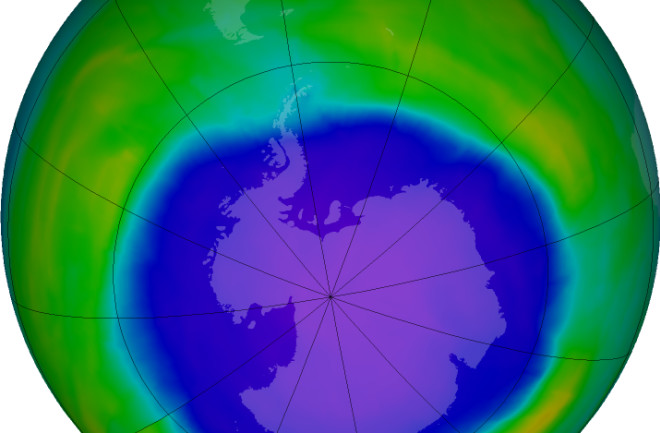 Total ozone concentrations in the atmosphere over Antarctica in early October, as determined using satellite data. The blue shows where concentrations were low enough to qualify as an 'ozone hole.' (Source: NASA Earth Observatory) The "ozone hole" over Antarctica grew 22 percent this year over 2014 — finishing out the season as the fourth largest since the start of the satellite record in 1979. Concentrations of ozone in the stratosphere over Antarctica also were lower in 2015 than in most other years. In other words, this year's hole was relatively broad and deep. This has compelled at least one professional doubter of humankind's impact on natural systems to raise questions about our role in depleting the Earth's ozone layer. As Steve Goreham, author of "The Mad, Mad World of Climatism: Mankind and Climate Change Mania," has put it, "the longer the hole persists, the greater the likelihood that the ozone layer is dominated by natural factors, not human CFC emissions." Uhm, sorry Steve, but no. Despite your attempt to cast doubt on the link between the ozone hole and emissions of human-made compounds called chlorofluorocarbons, or CFCs, there isn't ANY scientific doubt about this. And your statement carries about as much authority as what you have to say about climate change (namely that "natural cycles of Earth are the dominant cause of climate change — not manmade greenhouse gas emissions"). Ozone in the stratosphere occurs naturally. It's important for a number of reasons, not the least of which is that it helps screen out cancer-causing ultraviolet radiation from the sun. (Ozone pollution at the surface is a different matter entirely.) Stratospheric ozone is depleted by manmade CFC chemicals that once were commonly used for refrigeration, air conditioning, in aerosol cans, and in other applications. When depletion of the ozone layer over Antarctica became evident — and was definitively tied to these compounds — a treaty to phase out their use was adopted by most nations of the world. (For a list of the relative handful of countries that have not ratified the agreement, click here.) This treaty, called the Montreal Protocol, entered into force on Jan. 1, 1989. So why did the ozone hole grow in 2015 even though the use of CFCs has mostly been eliminated by the treaty? Here's one important reason why:

Trends in halocarbon concentrations in the atmosphere, including ozone-depleting chlorofluorocarbons. CFCs are nontoxic chemicals containing atoms of carbon, chlorine, and fluorine that were used in aerosol sprays, refrigerants, and in other applications. They have been mostly phased out by the Montreal Protocol. (Source: NOAA) Check out the red lines, which chart the concentrations in the atmosphere of CFCs. They have peaked, and some kinds of CFCs have started to decline. But we haven't exactly seen a return to conditions that existed before these chemicals were first introduced. Why is that? The answer is that they are exceedingly long lasting in the atmosphere. In fact, once emitted, they will reside in the atmosphere for about 60 to more than 200 years. So all the CFCs we emitted before the Montreal Protocol are breaking down exceedingly slowly. And because of this, they are still contributing to stratospheric ozone depletion. Another factor this year has been temperature — unusually cold temperatures in the stratosphere. It turns out that the colder the temperature, the more effective CFCs are at breaking down ozone in the stratosphere. In other words, the growth of the ozone hole this year, while concerning, does not challenge scientists' understanding of the issue. Far from it.