The sparkly stuff is an environmental nightmare. It's also just one example of a larger category of pollutants that scientists are still struggling to understand. 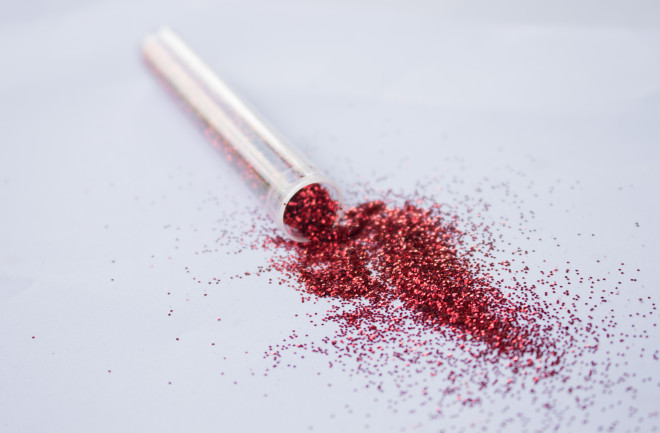 When you think of festive parties — or even a particularly glamorous brand of eyeshadow — glitter might also come to mind. Everything from holiday decorations to greeting cards, as well as makeup and nail polish, are commonly speckled with glitter for a little extra pizzazz. The downside is that it gets everywhere, sticking to unwanted surfaces like skin and clothes, and requires a lot of effort (and patience) to remove.

But glitter isn’t just sparkly and occasionally obnoxious — it’s also bad for the environment. It’s difficult to imagine Christmas and New Year’s celebrations without the sparkles, but it may be time to rethink our use of glitter.

Glitter is Actually a Microplastic

Microplastics are loosely defined as small plastic particles less than 5 millimeters in size. The small shards can be released into the environment directly, or come from larger plastic waste that degrades into smaller plastic fragments. “There [is] no crisp definition of microplastics, but I would certainly consider glitter to be a microplastic,” says Joel Baker, a marine pollution expert and environmental scientist at the University of Washington Tacoma. “It’s in the right size range and contains synthetic polymers.”

Read More: The Fight Against Microplastics

Glitter is commonly made of a plastic called polyethylene terephthalate (PET), which is coated with aluminum to create a reflective surface. Some glitter can also be made of polyvinyl chloride (PVC), another plastic material. “Glitter can contain any number of materials that are shiny, highly colored, or iridescent,” says Robert C. Hale, an environmental scientist and professor at the Virginia Institute of Marine Science. “It can include other polymer types besides PET, and even minerals such as mica.”

Simply put, glitter is a microplastic, too. And because microplastics are a big part of global pollution, it’s important to understand how they affect human and environmental health.

Microplastics come in a variety of materials, shapes, and sizes, and exhibit different degrees of weathering, which means it’s difficult to establish their overall impact, says Hale. Still, research shows that microplastics have been found even in remote places far away from human activity. According to a 2019 paper published in Marine Pollution Bulletin, glitter may be a significant source of microplastic in the environment and become a hazard to various organisms. The NOAA Marine Debris Program also said that glitter can contribute to marine debris.

In the ocean, microplastics can be mistaken for fish eggs and ingested by marine wildlife. These tiny particles can become trapped in their stomach, causing malnutrition and weight loss. They may also cause reduced feeding rates and lower rates of reproduction in some species. The degree of these effects, however, typically varies between species and stages of their life cycle.

Regardless, even though the seafood that we eat is likely contaminated with microplastics, our dietary exposure to plastic particles is relatively low compared to our inhalation of plastic particles. “Personally, I am very concerned for human health as we live more than 90 percent of our lives indoors, or in vehicles, which are essentially closed, recirculating boxes with huge amounts of plastics inside,” says Hale. “Plastic is in carpeting, furniture, paint, insulation, and medicine. It carries our food and drink, and inside, even our air.”

We are constantly surrounded by plastic, even with common, everyday items such as baby bottles, toys, organizers, storage bins and food containers. A 2021 study published in Environmental Science & Technology Letters recently found that the concentration of microplastics found in stool samples was significantly higher among infants than adults, suggesting that babies are generally exposed to higher levels of microplastics.

That said, very little is currently known about the health consequences of high and long-term exposure to microplastics.  “It is unlikely that ingestion of microplastics would harm a human as they are too small to block the gastrointestinal tract, but too big to pass through cell walls,” says Baker. “Very small particles, on the scale of nanometers, can pass across the blood-brain barrier and could cause problems, but these are orders of magnitude smaller than glitter.”

However, it’s important to consider not only the physical effects of microplastics, but also the impact of their chemical additives, says Hale. Hazardous chemical substances added during plastic production are found to affect human and environmental health. These additives contaminate soil, air, water, and food, causing a variety of medical conditions and impairing immune and reproductive systems. Beyond that, microplastics can act as magnets and become carriers of toxic environmental pollutants, increasing their overall toxicity to the human body when ingested.

Given the environmental harm of glitter (and microplastics in general), many companies have started producing biodegradable glitters, such as Meadowbrook Inventions and Ronald Britton Ltd. A team of researchers from the University of Cambridge also found a way to produce vegan glitter, having discovered that nanocrystals from cellulose — a natural material found in the cell walls in plants, fruits and vegetables — can bend light and create vivid colors.

That said, these alternatives aren’t completely eco-friendly. A 2020 study published in the Journal of Hazardous Materials found that both conventional or non-biodegradable PET glitter and alternative glitter made from cellulose or mica can affect aquatic ecosystems.  “We probably cannot avoid contributing [to microplastic pollution], but there are ways to reduce our contributions,” says Hale. “Yes, we can reduce our use of glitter, microbead-containing products, etc. But these are small, albeit preventable sources.”

Going without glitter isn't a bad idea, but it may be a sparkly scapegoat for larger environmental concerns: Hale and Baker both say that most microplastics come from the breakdown of larger plastics we use every day, therefore the most eco-friendly action you can do is to stop the unnecessary and excessive use of all sorts of plastics. Opt for reusable alternatives, turn down single-use plastics when you can, and avoid products with plastic packaging.

“The best thing to do is to minimize the use of ’single-use’ plastic and to properly dispose of those that you do use,” says Baker.