There are many ways you could die in our beloved Yellowstone National Park. 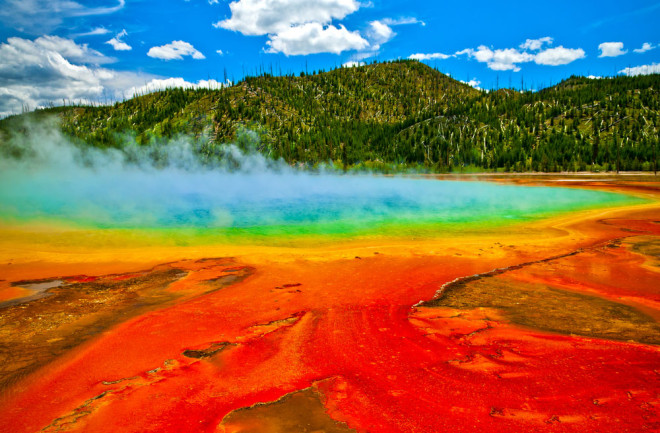 Walking into the wilderness is always dangerous.

That holds true in national parks, where the bounty of paved roads, groomed campsites and friendly rangers can make nature feel downright civilized. The great outdoors still pose risks to tourists and grizzled mountain men alike, whether due to freak accidents — being dissolved in acid — or incidents of regrettable decision-making — putting a bison calf in your trunk.

“There are a lot of different ways to get killed in this park, it’s an unforgiving environment. This is a true wilderness area,” says Lee Whittlesey, the Yellowstone National Park historian. In his 1995 book, Death in Yellowstone: Accidents and Foolhardiness in the First National Park, Whittlesey chronicled the many ways visitors met their end in the park. There are so many, in fact, he released a larger, updated version of the book in 2014.

Don’t Go For a Dip

One of the latest fatalities in Yellowstone occurred this summer, when a 23-year-old Oregon man slipped and fell into a hot spring while attempting to test the water. Authorities think that he and his sister, who was not harmed, were likely trying to “hot pot,” or take an illicit dip in one of the park’s iconic geothermal features. This particular spring, in the Norris Geyser Basin, contained water that was upwards of 212 degrees Fahrenheit, scalding him to death. His body was never recovered from the pool — authorities believe that the burning, acidic water likely dissolved his remains.

As the nation’s first national park, Yellowstone has seen its fair share of deaths over the years. Ironically, many of them have come as a result of the some 10,000 geysers and hot springs that draw people to the park in the first place. At least 22 people have died, and many more have been injured, in these natural wonders since the park’s inception, according to Whittlesey.

This includes three park employees who jumped into a hot spring in the dark, thinking it was only a small stream. One died and two were severely burned. Another young man died after diving headfirst into the 200-degree Celestine Pool in an attempt to save his friends’ dog. The first recorded casualty of the hot springs was a seven-year-old boy in 1890, and the total number of geyser-related injuries is probably much higher.

“Most people who get thermal burns feel a little sheepish about it,” Hank Heasler, the park’s principle geologist, said in a Yellowstone blog post. “Geothermal attractions are one of the most dangerous natural features in Yellowstone, but I don’t sense that awareness in either visitors or employees.”

Grizzly bear attacks are another high-profile danger in Yellowstone, and each incident opens anew the debate about euthanizing the animal responsible. Since 1980, there has been on average only one such attack a year, and the victims usually dodge fatal injuries. Only eight people have been killed by grizzlies in the park, although 2011 did see a bizarre pair of deadly attacks just miles from each other. A bear known as the “Wapiti sow” believed to be responsible was captured and killed, although later evidence cast doubts on her involvement in the second death.

Many Ways to Die

There are other, more random, dangers in Yellowstone.

A ranger was killed in the 1920s after misidentifying and eating the poisonous roots of a hemlock plant, a couple died after backing their car off of a cliff, and a worker at the park perished after being exposed to toxic hydrogen sulphide gas at the bottom of a pit. Rockfalls, exposure and drowning have also killed visitors to the park.

And even if you never visit Yellowstone, you aren’t immune to its dangers.

Every few years, it seems that someone sounds the alarm about the Yellowstone “supervolcano” erupting and wiping out civilization on North America. The evidence for such an eruption in our lifetimes, or anytime in the next few millennia is slim: the odds are about one in 700,000 for any given year.

Scientists are using a helicopter equipped with a hoop-shaped, electromagnetic device to better understand the behavior of a magma chamber beneath Yellowstone. Laster year, scientists discovered this massive reservoir was four times larger than they anticipated. That doesn’t mean the supervolcano is any more dangerous, however. The reservoir has been there for a long time, and it’s not getting bigger. We just haven’t examined it closely until now.

Boiling hot springs and giant magma chambers remind us that slapping the wilderness with a national park designation doesn’t tame it. Over 99 percent of Yellowstone is pure backcountry, and it will likely stay that way — wilderness is what we come to experience.

“That is what a place like this is about, is wildness,” says Whittlesey. “That is what we’re protecting here, the wildness of an ecosystem.”