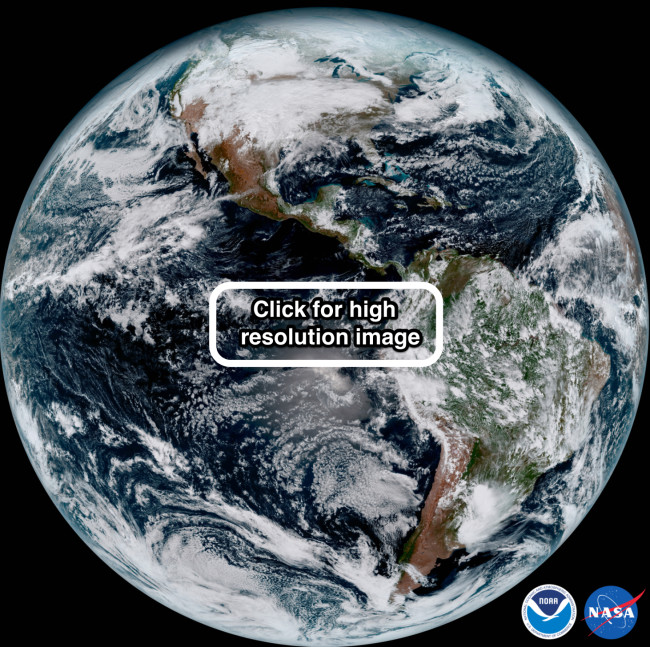 This full-disk visible image of the Western Hemisphere was captured by NOAA's GOES-16 satellite at 1:07 pm EST on Jan. 15, 2017 and created using several of the 16 spectral channels available on the satellite's sophisticated Advanced Baseline Imager. The image, taken from 22,300 miles above the surface, shows North and South America and the surrounding oceans. (Source: NOAA) In recent weeks, two new weather satellites — GOES-16, lofted into orbit by the United States, and the Japanese Himawari-9 — have begun sending back spectacular images of the home planet. With GOES-16, the United States is actually playing catch-up with the Japanese, whose incredibly capable Himawari-8 satellite has been in operation since July of 2015. Himawari-9 is its twin — and is now serving as its backup. Make sure to scroll down to see some of its first images, sent back to Earth on January 24th. Meanwhile, GOES-16 is the first in a series of four next-generation geostationary weather satellites. Launched on November 19, 2016, it began sending its first images back to Earth a couple of weeks ago. In its capabilities, it is very similar to the Himawari spacecraft. "Meteorologists are drooling," says atmospheric scientist and meteorologist Angela Fritz, writing in the Washington Post about the GOES-16's first images, including the composite above showing the Western Hemisphere on Jan. 15, 2017. You can check out a very high resolution version of the image (almost 30 megabytes) by clicking on it. Then make sure to click again to zoom in really close. The detail is simply amazing. 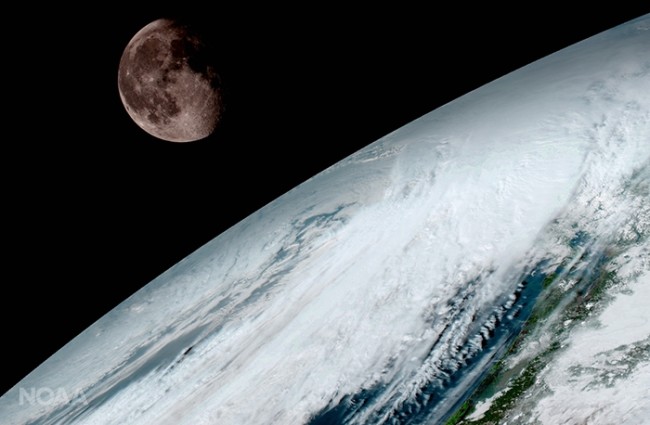 GOES-16 captured this stunningly detailed view of the moon above the Pacific Northwest on Jan. 15, 2017. As with earlier GOES spacecraft, GOES-16 uses the moon for calibration. (Source: NOAA/NASA) GOES-16 is already proving to be a valuable tool for forecasters by providing continuous imagery and measurements of Earth's Western Hemisphere. Among other advances, it monitors the atmosphere five times faster and with four times the resolution than what has been possible with earlier GOES satellites. And it does all that while multitasking. GOES-16 scans the entire Western Hemisphere every 15 minutes, producing a 'full-disk image.' At the same time, it scans the continental United States, or 'CONUS,' every five minutes, according to NOAA. Compare that with the previous generation of satellites, GOES-East and GOES-West. Still in operation, they take twice as long to produce a full-disk image. And the satellites must wait until that operation finishes before completing a CONUS scan. (For more details on the operations of GOES-East and West, see this detailed post from the Cooperative Institute for Meteorological Satellite Studies.) The multi-tasking doesn't stop there. When threats arise from wildfires, volcanic eruptions, hurricanes, or severe thunderstorms and tornados, GOES-16 can also zero in and scan the affected region as rapidly as every 30 seconds — twice as fast as GOES-East and West are capable of when put in 'Super Rapid Scan Operations' mode. 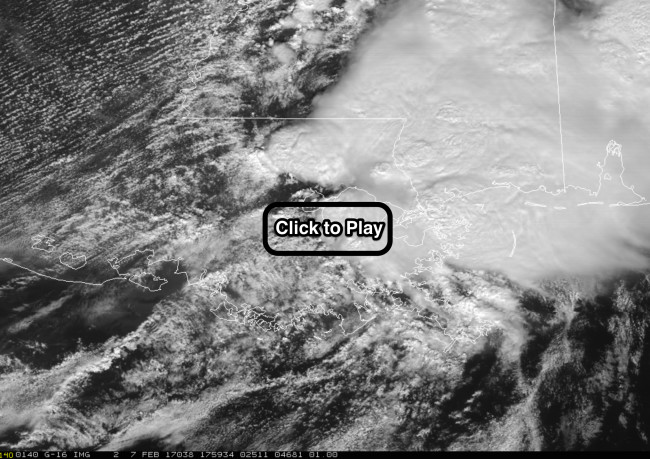 This animation from GOES-16 shows the tornado-producing storms that swept through Louisiana on February 7, 2017. (Source: NOAA Satellite and Information Service) The animation above is an example of that rapid-scanning capability. In almost real time, and with stunning 0.5-kilometer resolution detail, it shows the development of severe thunderstorms boiling up over southern Louisiana and Mississippi. These storms unleashed at least nine vicious tornados, including one that ripped through the eastern part of New Orleans, causing at least 33 injuries. Based on a survey of the damage, the National Weather Service estimates that the monster tornado was an EF-3 on the enhanced Fujita scale, meaning wind speeds reached 136 to 165 miles per hour. 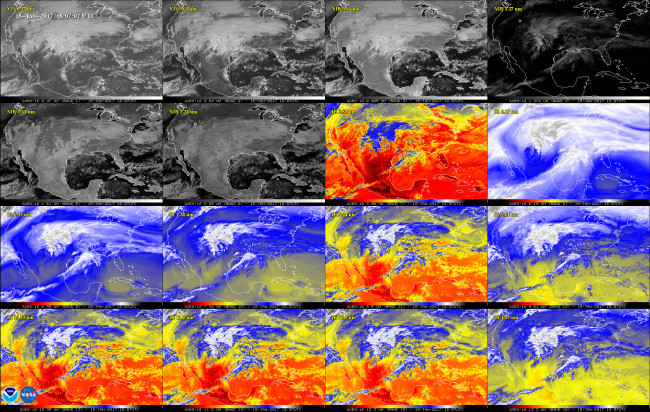 The continental United States is seen in each of the 16 panels in this image. The first two panels were acquired in visible wavelengths of light by the ABI instrument on GOES-16. The next four show the scene in near-infrared, and the remainder are in infrared. These channels help forecasters distinguish between clouds, water vapor, smoke, ice and volcanic ash. GOES-16 has three-times more spectral channels than earlier generations of GOES satellites. (Source: NOAA) Beyond helping forecasters provide improved severe storm watches and warnings, GOES-16 also monitors lightning strikes and provides critical information on how solar flares and other space weather events affect Earth. 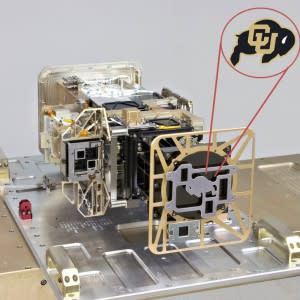 GOES-16's Extreme Ultraviolet and X-Ray Irradiance Sensor, or EXIS, The instrument was built by the Laboratory for Atmospheric Physics at the University of Colorado. (Source: NOAA Satellite and Information Service) As a University of Colorado Buffalo (I am a professor at CU), I also could not resist including the image to the right. My colleagues at the Laboratory for Atmospheric Physics, or LASP, incorporated our buffalo mascot, Ralphie, into the GOES-16 instrument they designed to monitor how the Sun's electromagnetic radiation affects our upper atmosphere. GO BUFFS! Meanwhile, the Eastern Hemisphere has been receiving detailed, near-real-time scrutiny since 2015, thanks to Japan's Himwari-8 satellite. And now, with Himawari-9, the first satellite has company. Here is one of Himawari-9's first images, transmitted to Earth on Jan. 24, 2017: 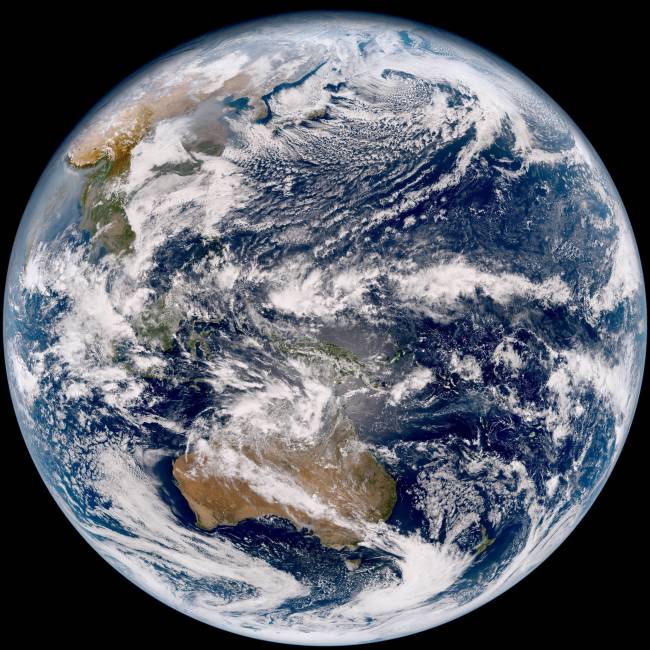 Source: Japan Meteorological Agency As with the GOES-16 image at the top of this post, make sure to click on this one — and then click in again to zoom in and see some absolutely stunning detail. When I did that over the Himalaya, here's what I came up with: 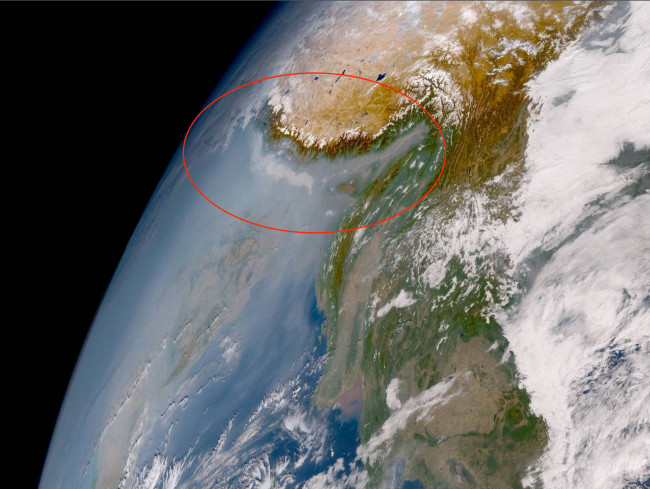 Himawari-9 view of the Himalaya, Tibetan Plateau, India and parts of Southeast Asia. (Source: Japan Meteorological Agency) I purposely clicked on this part of the full-disk image because I spotted what looked like a pall of air pollution pushing up against the base of the Himalayan mountain range. And sure enough, when viewed close up, there it is. I've circled the worst of it, along with the mountains and part of the Tibetan Plateau. (On January 24th, monitoring on the ground confirmed that air quality in New Delhi was at extremely high levels.) I was also drawn to another gray pall on the full-disk image — hovering over a large part of China, including Beijing. 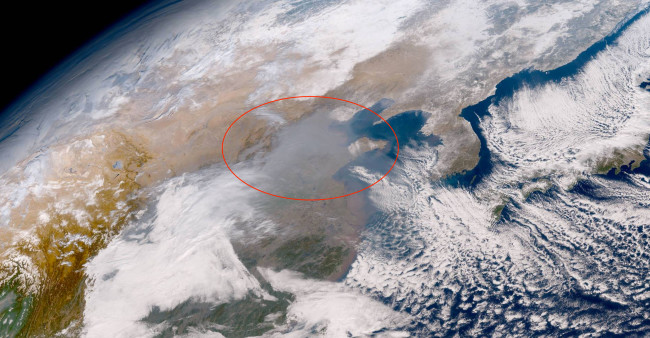 Source: Japan Meteorological Agency Air quality in Beijing on January 24th was excessive. Just three days later, conditions had deteriorated even more — so much so that the word "airpocalypse" would not be too extreme a way of describing them. With GOES-16 and the Himawari weather satellites, we now have an even more acute view of our planet's atmospheric, hydrologic, oceanic, and climatic processes. Sometimes that view will be distressing. But overall, I'm thinking Earth never before looked this good from space.