With soaring temperatures in the forecast, risks rise from California's Sherpa Fire, and other blazes across the West

An animation of satellite images acquired between Jun 16 and 17, 2016 show the smoke plume from the Sherpa Fire near Santa Barbara, California. (Images: NASA Worldview. Animation: Tom Yulsman) From a trail near my house along Colorado's Front Range, the majestic Rockies ordinarily stand out in clear relief against blue Western skies. But when I set out on a run this morning, those skies were gauzy, and the mountains were barely visible. The cause: smoke blowing in from wildfires burning to the west. With temperatures beginning to soar under a growing dome of high pressure, firefighters are struggling to contain major wildfires in California, Arizona, New Mexico and other western states.

SEE ALSO: Here’s what the brutal heat wave now setting up across a large part of the U.S. looks like — in four simple graphics

The Sherpa Fire near Santa Barbara has garnered the most media attention — and rightfully so, since it is burning near a highly populated area and threatens many homes. As I'm writing this on Saturday afternoon, it has covered more than 7,000 acres. That's about a quarter of the size of the nearby city of Santa Barbara. The fire, which is burning in the Santa Ynez Mountains, has frequently raced downhill toward California Highway 101 along the coast. It has prompted the mandatory evacuation of about 270 homes. The animation above shows its evolution during Thursday and Friday, as seen from the vantage of space. The animation consists of images captured by three satellites on June 16 and 17: NASA's Terra and Aqua, and the Suomi NPP satellite. (The first and last images in the animation linger slightly longer than the others.) The fire has also been visible to the GOES-West weather satellite: 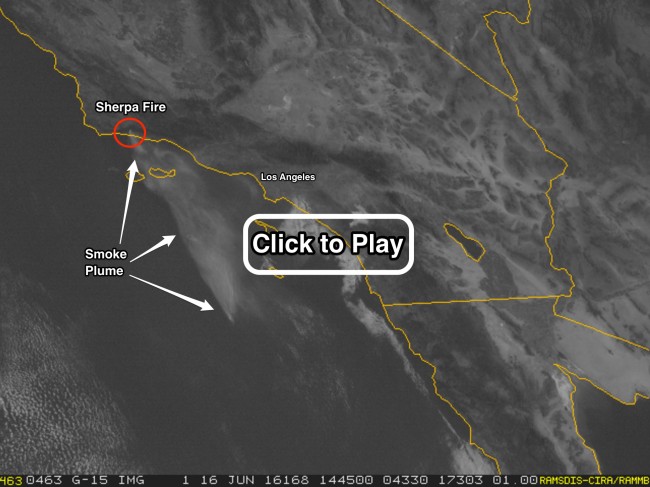 Source: RAMMB/CIRA/NOAA This animation shows the evolution of the smoke plume from the Sherpa Fire from when the blaze began in the afternoon of Wednesday, June 15 through the morning of Saturday, June 18. The plume can be seen streaming out to sea in the upper left of the frame. At one point, a significant amount of smoke blows inland as well. Here's another view, this one from the ground: 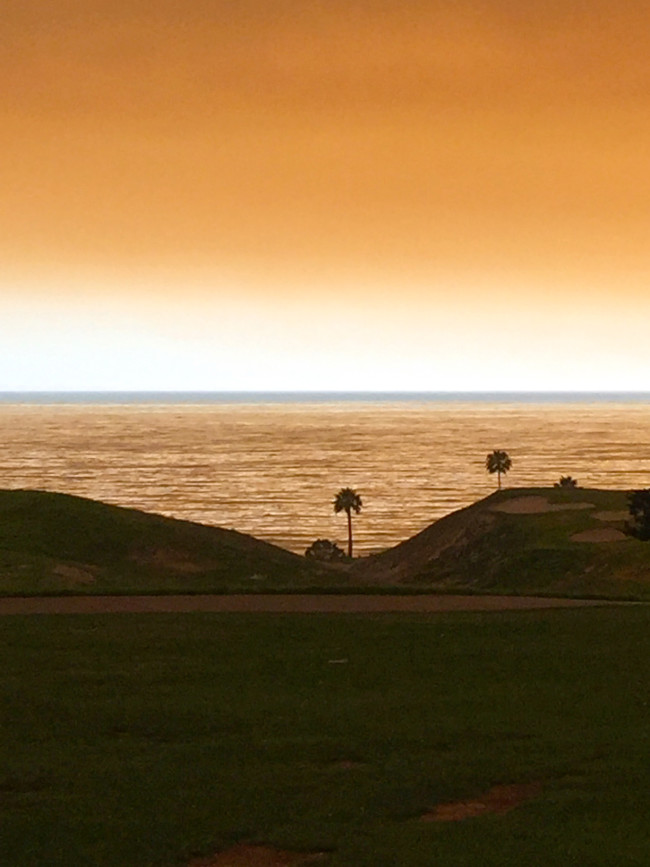 Smoke from the Sherpa Fire over the ocean on Friday evening, as seen from Goleta, just north of Santa Barbara, CA. (Photo: Courtesy Stella Herzig.) At sunset on Friday, the smoke hung low over the ocean and took on an ominous glow, as seen in this beautiful — and unsettling — image shot by my good friend Stella Herzig. The good news is that as of Saturday afternoon, the Sherpa Fire was 43 percent contained. Officials are estimating full containment by Thursday. But there are significant challenges immediately ahead. Fears are now focusing on mounting temperatures that are forecast to soar into the high 90s on Sunday and possibly as high as the low 100s on Monday. But that's not the only problem. The sharp contrast between brutally hot temperatures in the mountains and the relatively cool ocean causes a phenomenon called sundowner winds. These race downhill, typically beginning at sunset and continuing into the evening. These winds could gust to 50 miles per hour during the next three evenings. Here's a snippet from the National Weather Service forecast discussion for the Los Angeles area:

. . . the offshore gradients . . . will increase each night, peaking Monday evening, with gusty winds up to 50 mph not out of the question. The downsloping winds across this area will likely cause late day and early evening temps to soar in the foothills to the coast, probably well into the 90s to near the century mark in some areas. Record hi temps will be possible each day at Santa Barbara Airport with the daytime hi most likely occurring around 6 PM.

The video and still image below provides a sense of the challenges facing firefighters: https://twitter.com/yamphoto/status/744153187523825665 https://twitter.com/KPCC/status/744189761716248577 Elsewhere in the West, even bigger fires are blazing. These include the more than 30,000-acre North Fire west of Socorro, New Mexico (burning since May 21), the 17,000-acre Dog Head Fire southeast of Albuquerque, and a number of others. With the heat that's building across much of the West, it's going to be an interesting few days...