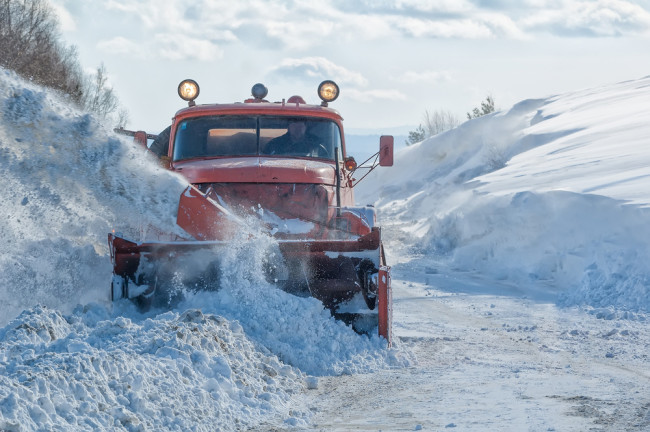 Wisconsin is known for two things: its cheese and its wicked winters. Now the state is combining the two in a unique feat of recycling genius.

After snowstorms like the one that passed through Wisconsin over the weekend, snow plows clear the streets, and trucks spread salt to prevent the roads from icing over. Since this northern state gets a lot of snow, it requires a lot of salt. Now some counties, including its most populous, Milwaukee, are using a byproduct from the cheese-making process to reduce their salt bills. The salty water, called brine, can be mixed with rock salt and sprayed on the roads. According to The Verge,

In this case, the salt in question has already been procured for another task — making cheese — and would have normally been sent to waste treatment facilities afterwards.

of the nation's cheese last year---some 2.8 billion pounds. That means a lot of brine was produced as well. The idea of using that brine to keep roads clear of ice was born a few years back, in a rural area of Wisconsin's Northwoods. Here, the salty waste was transported from local cheesemakers, mixed with rock salt, and sprayed on the roads. Local officials found that the brine kept the rock salt in place, reducing the amount needed to prevent slick roads. Emil Norby, who works for Polk County, told The New York Times

, “If you put dry salt on a roadway, you typically lose 30 percent to bounce and traffic.” But by mixing the salt with the brine, the rural county saved $40,000 on its rock salt bill in 2009 (the year it started the experiment) and has increased that amount every year since.

Not All Cheeses Are Created Equal

It doesn't take much brine to make the salt stick. The permitted ratio is eight gallons of brine to one ton of rock salt. But the type of cheese does matter. Jeffrey A. Tews, who manages this year's brine-spraying experiment on Milwaukee's south side, told The New York Times

“You want to use provolone or mozzarella. Those have the best salt content. You have to do practically nothing to it.”

So far there have been no complaints and no whiffable cheese odors. Milwaukee will be the first urban setting to try the brine-based system. A full report will come in the spring, along with the melt.