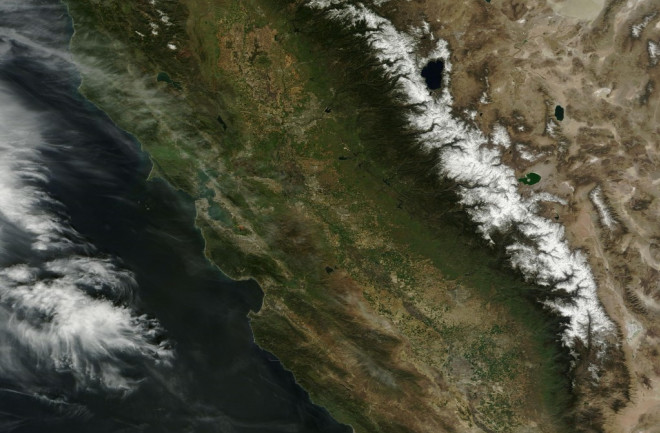 Most of California is captured in this March 23 image from NASA's Terra Satellite. The Sierra Nevada range is to the right. Snowpack there is half of normal. (Image: NASA EOSDIS Worldview) A month ago, the snowpack in California's Sierra Nevada range was looking really thin. This week, officials announced that it's in even worse shape — just as the state goes into the warm season. And for much of the rest of the West, it's not looking too much better. Manual measurements of the snowpack in the Sierra today were expected to confirm that snowpack there is at just 54 percent of average, according to the California Department of Water Resources. In late February, it stood at 66 percent.

Click for an animation of how California's snowpack has evolved since late October. Snowpack in the range typically peaks around April 1st. It's always possible that the state could get walloped by a few freak storms. But don't count on it. The climate outlook for the next month in California (and much of the West as well) is for below average precipitation. So in all likelihood, winter is leaving the source of about one third of California's water high and very dry. There is a modicum of good news, however: There was so much rain and snow in November and December that reservoirs filled. With the exception of one, they're in pretty good shape. Here's what the situation looks like in the West overall:

The water content of snow in the West's major river basins is depicted here. (Source: Western Regional Climate Center) As the map indicates, the Pacific Northwest has done okay. But much of the rest of the region has not, with New Mexico hit particularly hard. Despite some recent storms, nature has not been kind, including in the last 30 days. As this map shows, there have been a few wet spots here and there, but overall precipitation has been very scanty (to put it mildly):

The red tones tell the tale: It has been very dry in most of the West over the past 30 days. (Map: Western Regional Climate Center) Given this picture, it should come as no surprise that the weekly U.S. Drought Monitor map released on Tuesday was also looking pretty red — meaning dry — across almost half the country. It's going to be an interesting summer...

More From Discover
The Sciences
Drought in Iraq Has Revealed an Ancient Mesopotamian City
Environment
Midwestern U.S. Forests Doubled in Carbon Storage During the Holocene
Planet Earth
Scientists Identify New Polar Bear Population Uniquely Prepared for Climate Change
Environment
A Wildfire in Arizona is Forecast to Send Smoke Streaming All the Way to the Great Lakes
Planet Earth
How Old Is the Oldest Sea Turtle?
Environment
New CO2 Record Prompts a Scientist to Ask, 'What's It Going to Take for Us to Wake Up?'
Recommendations From Our Store
My Science ShopDiscover STEM Kits
My Science ShopDiscover 2022 Calendar
My Science ShopStrange Science
My Science ShopElements Flashcards
Shop Now
Stay Curious
Join
Our List