The ice has likely reached an "uneventful maximum," but the long-term decline due to human-caused warming continues. 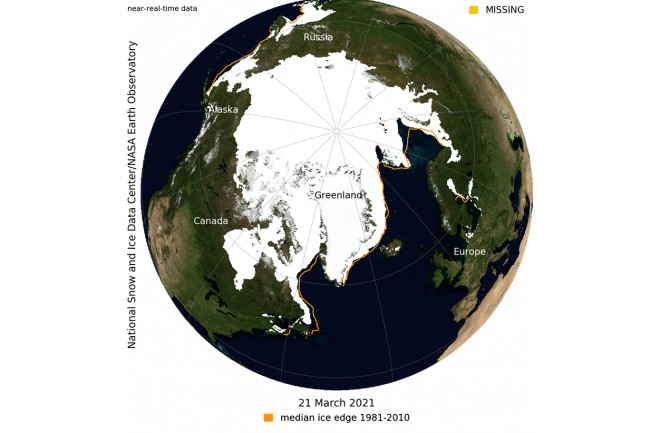 Arctic sea ice appears to have reached its maximum extent for the year on March 21, 2021, tied with 2007 as the seventh-lowest in the satellite record. The orange line shows the median ice edge for 1981-2010. (Credit: NSIDC / NASA Earth Observatory.)

The months-long expansion of Arctic sea ice during the brutal cold of polar winter appears to have reached its seasonal peak.

According to an announcement today by the National Snow and Ice Data Center (NSIDC), the maximum extent of the ice this year is about 336,000 square miles below the 1981 to 2010 average maximum.

That extent of missing ice is about twice the size of California. And it means the maximum extent of Arctic sea ice this year is tied with 2007 for seventh lowest in the satellite record, which dates to 1979.

One caveat: Continued winter conditions could still push the ice extent higher, so this is still preliminary. Final data should be available in early April.

It its announcement today, the NSIDC said the sea ice had reached "an uneventful maximum." But even though the maximum extent wasn't close to record territory, the situation could change dramatically in coming months.

The animation above shows that clearly. In particular, look at the evolution of the white line, which shows the extent of Arctic sea ice day by day during 2012. On March 20th of that year, it reached its maximum extent, topping out at about 5.9 million square miles of ice coverage. That was about 200,000 square miles higher than this year's maximum extent.

Now check out that white line as it bottoms out in September, after the warmth of summer. It shows sea ice extent in 2012 reaching a record low that still stands.

What happened last year is also instructive. In 2020, the end-of-winter extent of Arctic sea ice was 11th lowest on record. By the end of summer, the extent had bottomed out at second lowest, with only 2012 having less ice.

We don't know whether conditions this summer will drive sea ice as low or even lower. But the experience of 2012 and 2020 shows that it is certainly possible.

Whatever happens to sea ice by September of this year surely will be newsworthy, and if it reaches a record low, that will almost certainly make headlines worldwide. But the long term trend is even more important than the monthly and annual verdicts.

"The substantial decline in extent since 1979 is one of the most iconic indicators of climate change," concludes NOAA's Arctic Report Card for 2020.

How significant are the recent declines in sea ice in the context of a much longer time span?

The satellite record of Arctic sea ice extends back only 42 years. Historical records push our knowledge back to no more than about 100 years ago. So in order to look back even further requires the use of so-called "proxy" records — things like tree rings and cores drilled from ice caps and lake bottoms in the Arctic.

Using that technique, scientists in 2011 were able to reconstruct the history of Arctic sea ice extent over nearly a millenium and a half.

As the authors concluded in a study published in the journal Nature, although extensive uncertainties remain, especially before the sixteenth century, "both the duration and magnitude of the current decline in sea ice seem to be unprecedented for the past 1,450 years."

You can see that clearly in the graph's precipitously plunging line. With the start of human-caused warming, Arctic sea ice has fallen off the proverbial table.