Winners of the "Environmental Nobel Prizes" Fought for a Cleaner Planet 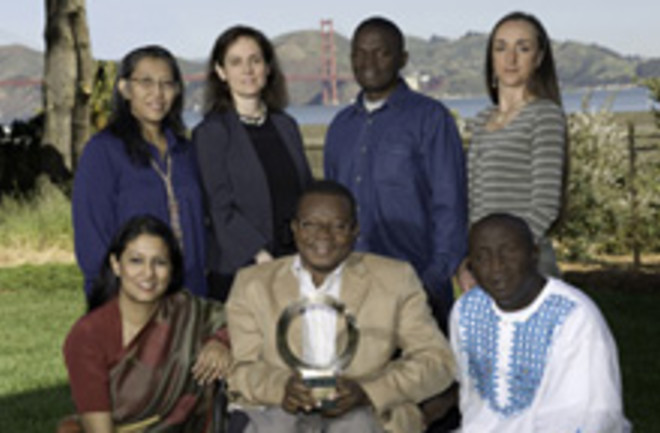 Seven grassroots activists who fought powerful polluting industries and often stood up to intimidation are now receiving rewards and recognition: They're winners of the Goldman Environmental Prize, sometimes called the environmental Nobel Prize.

Each winner receives a $150,000 purse. The winner from North America, Maria Gunnoe, took her stand against coal mining companies in Appalachia, where companies commonly blast the tops of mountains apart to expose hard-to-reach coal seams, and dump the debris in the valleys.

"I never even knew I was an environmentalist," Gunnoe, who lives in southwestern West Virginia, said with a chuckle. Though raised to mind her own business, she was also taught to fight when attacked. That's how she sees the destruction of her gardens and orchard.... Gunnoe's home sits below a valley fill and has been flooded with coal waste seven times since 2000 [AP].

Gunroe says she has received numerous threats from miners angered by her opposition the coal industry; after she

helped convince a judge in 2007 to shut down an operator working without a legal permit, a "wanted" poster printed with her face hung in local stores until the FBI demanded its removal [Mercury News].

Marc Ona Essangui of Gabon, in West Africa, also fought against mining. He

Meanwhile, the South American winners, Huga Jabini and Wanze Eduards, together sought to protect the rainforest on the other side of the Atlantic Ocean. They organized indigenous people in the forests of Suriname to protest logging on their lands, and forced the government to recognize their right to have a say in how the land's resources are used. The other three winners all faced down toxic industries. In Asia, Bangladesh activist Rizwana Hasan raised awareness of the dangers of the "ship breaking" industry, in which decommissioned ships are dismantled by hand on the beaches, releasing toxic chemicals into coastal waters and endangering the health of workers. In Europe, the prize went to

Olga Speranskaya of Moscow. She created a network of 600 organizations and individuals to eliminate a Soviet legacy of abandoned toxic chemicals seeping into the environment in regions throughout Eastern Europe, the Caucasus and Central Asia [Mercury News].

The sixth prize went to Yuyun Ismawati of Indonesia, who helped establish community-owned landfills and recycling centers to deal with her country's waste problems and provide employment opportunities for the people. Related Content: 80beats: Bush Administration Rushes to Relax Environmental Rules, including a coal mining rule DISCOVER: Can Coal Come Clean? DISCOVER: Ravaged Republics discusses the Soviet legacy of pollution DISCOVER: The Air of Ostrava explains how the EPA went to work in the Czech Republic Image: Goldman Environmental Prize