Final numbers haven't been crunched yet, but a tie with 2016 is looking like a reasonable bet. 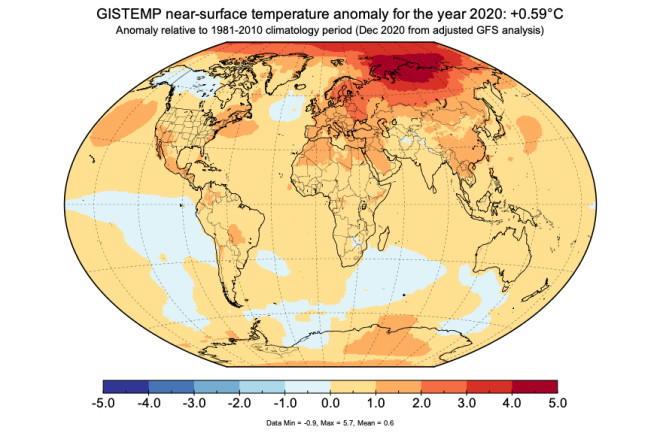 One analysis using 2020 climate data from NASA shows this pattern of temperature anomalies for the year. The analysis also shows an overall tie for warmest year with 2016. But this is still a projection, since all data for December are not yet in. (Credit: Karsten Haustein)

At the end of November, 2020 was looking like a sure bet to take the title as the warmest year on record.

But during December, the planet seems to have developed other plans.

This past month, unusually cool temperatures in the equatorial Pacific Ocean intensified and fanned out west of South America. That's the fingerprint of a strengthening La Niña.

You can see that fingerprint in the map above, which depicts temperature anomalies at the sea surface on December 29. Note all of that blue chill cutting across a large portion of the Pacific.

Meanwhile, on the other side of the world, a cool shift also occurred in Eurasia.

Through November, much of the region suffered under extremely warm temperatures, spurring wildfires in Siberia and helping to drive Arctic sea ice to its second lowest extent on record. But then in December, an anomalous iciness descended on a large portion of the region.

Taken together, these cool shifts will tend to tamp down the global average temperature for the month of December, thereby slowing the planet's rush toward a record-warm year.

Mind you, 2020 could still break the record previously set in 2016. It just doesn't look like a shoo-in any longer. And no matter what, it will go down as one of the very warmest years in records dating back to the 1880s.

Zeke Hausfather, a scientist who directs the climate and energy program at the Breakthrough Institute in California, has completed an analysis of six different datasets used by independent groups of scientists to come up with climate rankings for each month, and at the end of every year. Based on his analysis, Hausfather predicts that one of them, NASA's dataset, will show 2020 to be the warmest year on record. But five others will ultimately produce a tie with 2016.

"So in most datasets 2020 will be more or less tied with 2016 — at least within the margin of uncertainty in our global temperature reconstructions," he wrote on Twitter. "That's remarkable in a sense, given that 2020 is a La Niña year and 2016 was a super-El Niño event."

El Niño is La Niña's warm brother, a climate phenomenon characterized by warmer-than-usual temperatures in the equatorial Pacific. And 2016's El Niño (which actually began in 2015) was one of the strongest ever observed. This provided a very substantial boost to the global average temperature for the year — on top of human-caused global warming. The impact was so significant, in fact, that 2016 has retained the title for warmest year ever since, even as anthropogenic warming has continued.

So whether 2020 ends up besting 2016, tying with it, or coming in second, it will be remarkable — as Hausfather says — because of the significant cooling La Niña has provided late this year.

It's also worth noting that another climate scientist, Karsten Haustein of the University of Oxford, came up with his own independent prediction, using NASA's GISTEMP climate dataset. As he wrote on Twitter:

"With 99% of this epic rollercoaster of a year completed, time to reveal an estimate of 2020’s global temperature: As far as GISTEMP is concerned, it’s likely a draw with 2016, the warmest year so far. The reason 2020 didn’t end up beating 2016 is down to a rather 'normal' December compared to the record-warm Nov."

Gavin Schmidt, a climate scientist who heads NASA's Goddard Institute for Space Studies, where the GISTEMP dataset resides, has posted his own prediction to Twitter — for 2021, as well as this year. Based on Earth's long-term warming trend plus the projected evolution of La Niña over the next few months, here's what it looks like:

The long-term trend of global warming is seen in this graph by NASA's Gavin Schmidt, plus different predictions for how 2020 and 2021 will turn out. (Source: Gavin Schmidt via Twitter)

The blue bar in the graph above shows the range of predicted outcomes for 2020 based on projections made last winter. These included projections on how the El Niño-Southern Oscillation phenomenon, or ENSO — the umbrella term for El Niño and La Niña — would evolve. Back then, the odds favored a slide toward warmer El Niño conditions. But now we know that La Niña arrived instead.

The small brown bar in the graph above shows the prediction for 2020 based solely on observations of how the year had shaped up through November.

And then we come to the green bar, which shows the range of predicted outcomes for 2021, based on what scientists think will happen with ENSO — namely, a continuation of cool La Niña conditions into the spring.

And Schmidt's tweet hints at the take-home message: The overall global warming trend, vividly portrayed by the rising red line in his graph, is more important than the year-to-year ups and downs — including which particular up is the current record holder.

As Hausfather puts it:

"Ultimately the media cares about new records a lot more than the climate does; whether 2020 is slightly above or slightly below 2016, what matters for the climate is the long-term warming trend, where we see clear evidence of human activity changing the climate."

Of course, that's actually something we've known for many years now.