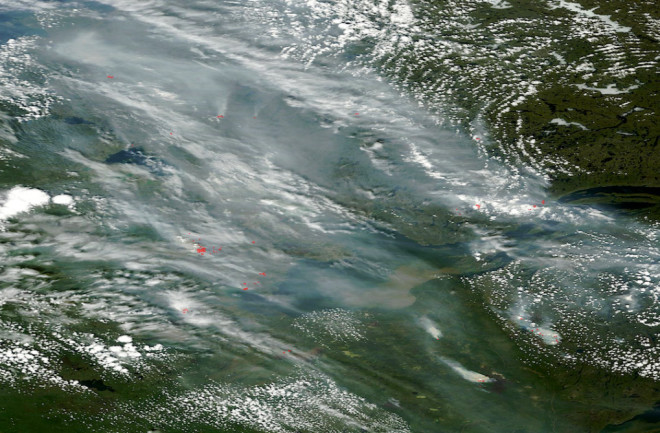 Smoke plumes are visible from multiple wildfires burning in the Northern Territories in this image captured by NASA's Terra Satellite this afternoon. (Click to enlarge.) Red dots mark places where the satellite detected fire. The Great Slave Lake is visible toward the bottom portion of the image. (Source: NASA) More often than not, the morning light I wake up to here in Colorado is pure, brilliant, even sharp. But for the past two mornings, the morning light has reminded me of Los Angeles in October — soft, yellow-golden in color, clearly filtered through a scrim of something suspended in the air. This is usually a sign that a wildfire is burning somewhere relatively nearby. So on both mornings I stepped out onto my deck and sniffed the air. Nothing. But it turns out that smoke has indeed been filtering the light here — and across a significant portion of both Canada and the United States.

A mosaic of iPhone photos shot from Niwot, Colorado, on Wednesday, July 2, 2014, shows a yellowish scrim of haze across the Northern Front Range. Smoke from wildfires blazing in the Northern Territories is contributing to the pollution. (Please click to enlarge. Image: © Tom Yulsman) The smoke has been coming from wildfires blazing more than 1,000 miles away, in Canada's Northwest Territories. You can see clear evidence of some of these fires in the image at the top, acquired by NASA's Terra satellite this afternoon. The red dots show locations where a sensor on the satellite detected fire. (Click the image to enlarge it.) The panoramic image above is a mosaic of iPhone photos that I shot from the top of a hill near my home in Niwot at about 11 a.m. today. The view is to the north. (Make sure to click this one too.) That pinkish-yellowish pall on the horizon usually isn't there. In fact, off to the left are the foothills of the Rockies, and on a good day you can see snow-covered peaks beyond them. Not today though. Although some of the pollution consists of ozone, the photochemical product of local air pollution, smoke from the Northern Territories is also contributing. As the smoke outlook issued this morning by Colorado's Department of Public Health and Environment put it:

Smoke from fires in the Northwest Territories of Canada will continue to produce hazy skies across portions of eastern Colorado Wednesday night and Thursday morning. This haze should decrease by Thursday afternoon.

As of yesterday, 72 fires were burning in the territory, according to the latest report from the Northwest Territories Forest Management Division. Since the start of 2014, a total of 113 fires have burned 915 square miles, which is almost twice the size of the City of New York. According to David Purchase with the forest agency, quoted by CBC News, by the middle of June, warm and dry conditions had left 70 percent of the Northwest Territories at extreme risk for wildfire.

The National Weather Service in Billings, Montana, posted this satellite image today showing the extent of the smoke plume from fires burning in Canada's Northwest Territories. (Source: National Weather Service) Weather conditions have conspired to blow that smoke far from Canada's north. In Montana, the Billings Gazette reported that it was obscuring the view of the mountains from the city. And the National Weather Service there posted the satellite image above to its Facebook page. It clearly shows the a pall of smoke across a huge territory. Here's a map of the extent of the smoke over the past two days, as detected by satellites:

The extent of smoke for the past two days as detected by satellites is depicted in colors ranging from lavender (densest) to light green (thinnest). Red dots show confirmed fire detections. (Source: NOAA Satellite and Information Service) As the map above shows, smoke from the wildfires in the Northern Territories, as well as some from fires just to the south in Alberta, has extended across about half of Colorado. It also seems to have looped across the U.S. mid-section. During my run this morning, my throat got dry and scratchy. So I really hope the haze clears out soon!