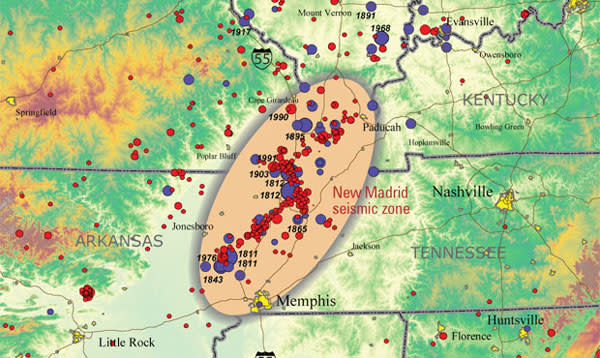 The magnitude 5.8 quake that struck central Virginia on Tuesday was felt from Florida to Maine to Missouri. “This is probably the most widely felt quake in American history, even though it was less than a 6.0,” says Michael Blanpied

, a USGS seismologist DISCOVER contacted after the event. The reason for this intensity is that the East Coast, like the controversial New Madrid Seismic Zone in the central U.S., is located amidst old faults and cold rocks in the middle of the North American tectonic plate, and seismic waves travel disturbingly far in such stiff, cold rock. We would do well to take a hint from Tuesday's expansive shake-up. It's lucky that it struck in rural America. But a similar tremblor in the crowded cities of the central U.S. above the New Madrid zone is a matter of when, not if. And the region is woefully unprepared to mitigate the damage, as Amy Barth explores in a piece from an upcoming issue of DISCOVER:

The disastrous winter of 1811–12 is the stuff of legend in the Midwest. In the span of a few months, three major earthquakes rocked Missouri, Tennessee, and Arkansas, violently shaking 230,000 square miles stretching from St. Louis to Memphis. Witnesses claimed that the ground rolled in waves several feet high and the Mississippi River flowed backward. Some reports described buckling sidewalks in Charleston, South Carolina, and tremors that reached as far as Quebec. Had seismographs been available at the time, scientists believe those tremors would have registered magnitudes at least as great as the 7.0 quake that devastated Haiti in 2010 and possibly as high as 8.0. These would place them among the worst in U.S. history.