Why the Amazon Rainforest is species rich 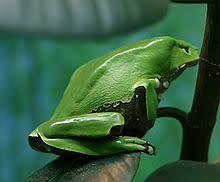 The Pith: The Amazon Rainforest has a lot of species because it's been around for a very long time.

I really don't know much about ecology, alas. So my understanding of evolution framed in its proper ecological context is a touch on the coarse side. When I say I don't know much about ecology, I mean that I lack a thick network of descriptive detail. So that means that I have some rather simple models in my head, which upon closer inspection turn out to be false in many specific instances. That's what you get for relying on theory. Today I ran into a paper which presented me with some mildly surprising results. The question: why is the Amazon Rainforest characterized by such a diversity of species? If you'd asked me that question 1 hour ago I would have said that it was a matter of physics. That is, the physical parameters of a high but consistent rainfall and temperature regime. This means the basic energetic inputs into the biome is high, and its consistency allows the organisms to plan their life schedule efficiently, maximizing the inputs. All that naturally produces a lot of diversification in the "climax" ecosystem. To some extent I would acknowledge this was pretty much a "Just-So," but I'd have thought it was a good shot, and probably representative of the internal logic of many people.

But no, a new paper in Ecology Letters seems to imply that that

the answer we must look to is history and not physics.

From the perspective of someone who is rooted in are reductionist conception of evolutionary biology this isn't the answer I was "rooting" for, but if it is, it is. What's their logic? First, the abstract, Phylogenetic origins of local-scale diversity patterns and the causes of Amazonian megadiversity

What explains the striking variation in local species richness across the globe and the remarkable diversity of rainforest sites in Amazonia? Here, we apply a novel phylogenetic approach to these questions, using treefrogs (Hylidae) as a model system. Hylids show dramatic variation in local richness globally and incredible local diversity in Amazonia. We find that variation in local richness is not explained primarily by climatic factors, rates of diversification (speciation and extinction) nor morphological variation. Instead, local richness patterns are explained predominantly by the timing of colonization of each region, and Amazonian megadiversity is linked to the long-term sympatry of multiple clades in that region. Our results also suggest intriguing interactions between clade diversification, trait evolution and the accumulation of local richness. Specifically, sympatry between clades seems to slow diversification and trait evolution, but prevents neither the accumulation of local richness over time nor the co-occurrence of similar species

is pretty easy to understand. It's a count of the number of species in a given area. In this case they limited their count to a specific clade, the tree frogs. This clade seems to have a common ancestor ~60-80 million years before the present from which it descends. Below is a phylogenetic tree (scaled to time on the horizontal) representing the relationships of contemporary tree frog species, as well as a distribution of the species across the world: 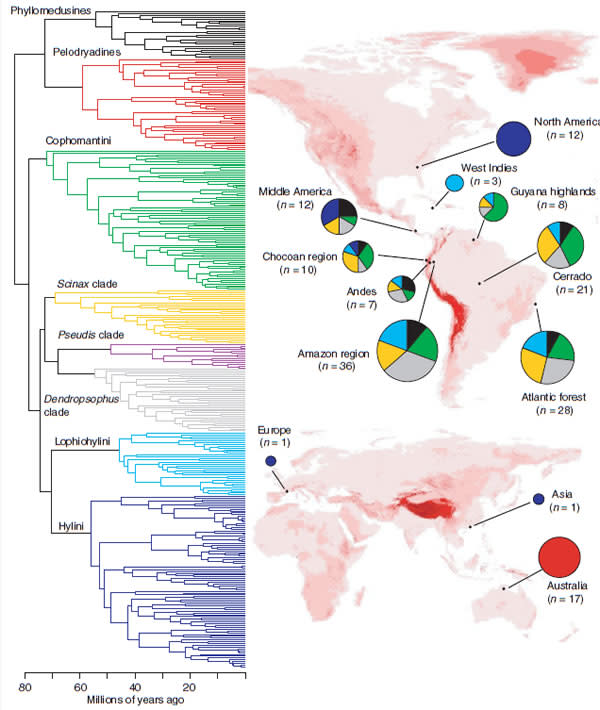 Visual inspection tells you immediately that Amazonia is overloaded with tree frog species. But to get at the question of what explains the variation in species richness the authors used standard statistical techniques relating predictors such as temperature and precipitation values to the outcome, species richness. The authors did find a relationship between precipitation and temperature and species richness. But once they controlled for phylogeny in their regression, that is, take into account history, the relationship went away. In other words the correlations may have been an artifact of the fact that the Amazon is warm and wet and rich with species. Controlling for the phylogeny of the clade, which is a record of contingent history, the expected picture relating physical parameters to diversification changes. The two panels above and to the left show the relationships between species richness (y-axis) and first colonization event. The left panel is pegged from the first colonization of any tree frog lineage, while the second sums up distinct colonization events by different clades (so the x-axis has a larger magnitude). The r-squared, the proportion of the variance of y explained by variance in x, is nearly 0.50 in the left and 0.70 in the right. That's pretty good. There's some interesting material in the paper sympatry vs. allopatry in regards to the tree frogs. Basically, how they vary in size and diversity as a function of whether they co-occur in the same ecosystem or whether they're physically separated (so allopatric speciation is when two lineages are separated while sympatric is when they are geographically overlapping but diverge anyhow, perhaps through occupation of differing niches). But that's not my primary concern or interest. How generalizable are these results form tree frogs? I don't know this literature well. Surely someone has done a phylogenetic least squares with a lot of different clades and checked for this? If the results here are generalizable then the diversity of the Amazon ecosystem is in large part a function of its longer term stability and persistence. I have posited that at the "end of history" natural selection will have shaped an exceeding simply and energetically optimized biosphere, dominated by a few species. But in Amazon is a case in the opposite direction, as clade diversification increases as a function of the time of ecosystem integrity. Is this monotonic? In other words, is there going to be a time when a rare evolutionary event may given rise to a species which sweeps away all the accumulated variation? Those are questions for the future I suppose. Citation: