Why Road Salt is Bad for the Environment

Melting the snow on roads with salt is causing problems for aquatic and land organisms — here’s how we can fix it. 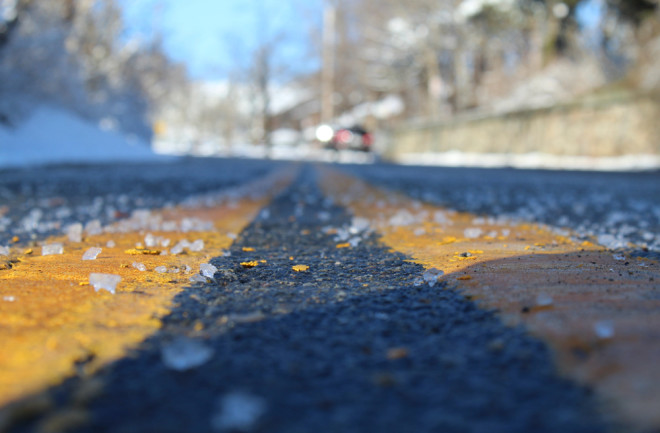 Spreading a few loads of salt across your driveway is an easy way to ward off your snow woes, and it’s certainly faster than putting in the work behind the shovel. But an increasing body of evidence reveals that the growing amount of residual salt accumulating in wetlands alongside highways and near residential areas is causing long-term damage to wildlife and plant communities both in wetlands and on dry ground.

“We walk on it, we drive on it — it’s pervasive,” says Rick Relyea, an ecologist with Rensselaer Polytechnic Institute, a private university in New York. “It’s really one of the most pervasive contaminants in northern latitudes that we, relatively speaking, know very little about.”

Depending on the type of road salt used to melt ice, the consequences can vary greatly. Road salt can stall the growth of amphibians and trout, as well as kill the zooplankton that provides the base for most aquatic life. It could even affect land creatures who rely on roadside plants absorbing the salt in the soil. Also concerning is the increase in salt levels in wetlands alongside roads treated with lots of salt. When you put too much salt in water, you can profoundly change the freshwater ecosystem to a brinier environment. “It makes it very difficult for everything living in the water,” says Relyea. In cases where public water sources or private wells lie near roads, the extra salt can even be a danger to human health.

While the increased salt in the ecosystem may not always kill individual organisms, the sublethal impacts might affect the fitness and reproduction of some species, causing long-term drops in their populations that result in a gradual disappearance.

“Those [sublethal impacts] end up being really important to whether a population can persist or not,” says Relyea, who has been behind a great number of scientific publications on the topic.

The problem is only getting worse. Relyea says the amount of road salt applied in the U.S. has increased three- to four-fold since the 1970s. Other research shows chloride concentrations have increased by up to 25 percent in streams in Maryland, New York and New Hampshire in winter, and up to 100 times higher than unaffected forest waterways during the summer. “In the last 10 years, the interest and the discoveries have just exploded in number,” Relyea says.

The impacts of salt on wildlife have proven myriad. According to a review Relyea published with a coauthor in Freshwater Biology, the most affected organisms are those that form the base of aquatic ecosystems—zooplankton. These creatures eat algae and provide food for other invertebrates and small fish. Salt can directly kill zooplankton in a matter of days at a high enough concentration, Relyea says, and once they are gone, whole wetland ecosystems can get knocked out. The good news is that these tiny creatures have some ability to adapt to higher saline concentrations within a matter of months.

“It’s encouraging that this might buy us some time until we fix the problem,” Relyea says.

But other creatures aren’t quite so quick to adapt. Relyea’s work has shown that high salt concentrations can stunt the growth of rainbow trout while other research shows that road salt can delay the development of young wood frogs, especially when salt gets into waters that are already polluted from other sources. A study in Nova Scotia showed that wood frogs and spotted salamanders were the most sensitive to sodium chloride, the cheapest and most common type of road salt. The latter two species weren’t even found in ponds with high salt concentrations, those researchers reported.

It isn’t only wetlands that suffer. Researchers found high concentrations of salt in milkweed alongside roads often treated with salt in the winter, and tests showed this could affect the development of monarch and cabbage white butterflies, giving the females bigger eyes and the males better flight muscles. While this might benefit individuals short term, salt concentrations acted a little like steroids, killing butterflies at higher concentrations.

These are just a few examples, but water salinization doesn’t only affect wildlife. Salt that seeps into waterways can also get into drinking wells, affecting human health in the process. One study in the Adirondack Mountains in Upstate New York showed that private drinking wells that were closer to highly traveled state roads, or that were downhill from these types of roads, had higher salt levels.

Some of these wells, they found, had high enough concentrations to exceed the limits of people with salt-restricted diets. Since people weren’t even likely aware of this extra source of salt in their diets from drinking water, it could be even leading to heart problems.

“It’s time we put these roads on a low salt diet,” Relyea says, adding that even if steps are taken now to limit the salt used on the roads, the materials will likely remain in these ecosystems for some time. “If we stop now, it will probably still come out, probably for years,” Relyea says.

How Do We Fix the Problem?

But overcoming the road salt problem is still relatively easy, Relyea says, when compared to widespread problems affecting wildlife such as climate change and habitat loss. One solution that Relyea likes to point to involves subtle changes to snowplows that improve their effectiveness at removing ice in the first place. Most snow plows have flat blades whereas most roads actually are built with a small curve to them that keeps water from pooling on the lanes during rainfall in the summer. Flat blades will often miss some ice, creating a need for follow-up with salt. But newer plows use live edge blades that can adapt to these subtle curves on the road, ensuring more snow and ice is cleared from the pavement in the first place.

“You’re fitting the curve of the hump-shaped road,” Relyea says. He adds that these plows cost more money and also mean that municipalities have to replace old trucks, but eventually they end up saving money.

Other potential solutions involve towns properly protecting their stockpiles of road salt from running off into the surrounding environment. Some towns in New York also pre-wet pavement with a salty brine several hours before predicted snowfall. This treatment makes snow easier to remove afterward and decreases the need for salt.

Finally, getting contractors or municipalities to calibrate their trucks more often can also improve accuracy. Many trucks are only calibrated for salt flow release once a year, if at all. This means that they may be releasing more (or less) salt than desired. By checking the calibration more often, towns and cities can ensure the trucks aren’t overdosing their roads and the surrounding environment.

Towns in New York state that have used these techniques above have managed to reduce their need for road salt by about 30 percent, Relyea says — all while saving money and the extra time it takes to remove snow.

“It’s a win all around,” Relyea says. “There’s no real trade-off here.” He adds that better regulations are needed to protect ecosystems and human health from salinization. On a personal level, when you’re out clearing your driveway before work, Relyea says the best way forward is just to use salt in moderation rather than using way too much.

“More doesn’t generally do a better job. Once you melt the snow, it’s melted,” he says.