Why Organic Advocates Should Love GMOs

Adapted from the new book The Infinite Resource: The Power of Ideas on a Finite Planet by Ramez Naam What if there was a way to farm that spared the rainforests, cut down on toxins in our soil and waters, and provided healthier, more nutritious food? Sounds like organic farming, right? But actually, it’s GMOs. 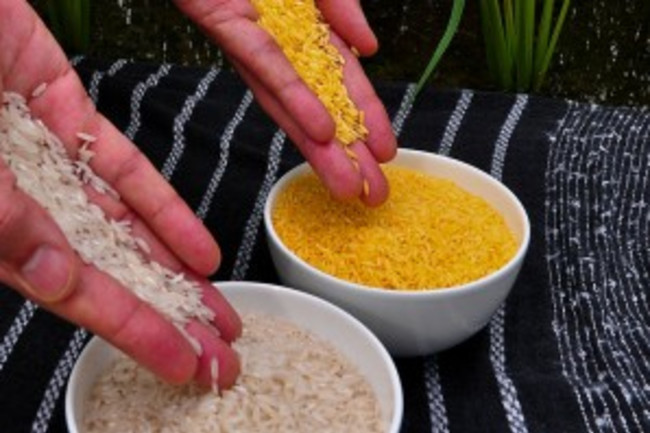 Golden Rice, biologically enriched with Vitamin A, will boost nutrition for millions of children. Photo/ International Rice Research Institute The goals of organics – farms that cause less damage to the environment and grow food that’s better for you – are great. But organic isn’t living up to that potential. In terms of nutrition, the consensus of multiple analysis of all the data (like this one from Stanford and this one from the UK) is that it’s more or less a wash. Organic foods, in general, are neither more nor less nutritious than their conventional counterparts. In terms of environmental impact, one might think that organic farms are the clear winners. And if you look at what happens on an acre of organic farm land vs. an acre of conventional farm land, that’s correct. But an Oxford University meta-analysis of 71 peer-reviewed studies showed that, because organic farms use more land to grow the same amount of food, they erase their environmental benefit and are in some ways worse than conventional farming. Save the Forests But even this is under-estimating the impact of organic farming, because the study above didn’t look at the biggest issue of agriculture – the conversion of land from forest to farm. We use nearly 1/3 of the land area of the planet to grow food. That, in turn, has led to the destruction of half the original forest on the planet. Around the world, agriculture drives a whopping 80% of deforestation today. That destruction of forest is by far the worst environmental impact of agriculture, many times worse than the impact of pesticide or fertilizer over-use. Meanwhile, projections are that by 2050, we’re going to need to grow 70% more food around the world than we do today. If we did that by maintaining yields exactly as they are and spreading farms, we’d chop down 70% of the world’s remaining forests. Trying to feed the world starting from organic yields would be far worse, because their yields are lower. How much lower? In 2008, the USDA surveyed every organic farm in the US, asking about their yields. Plant pathologist Steve Savage compared those yield numbers to yield from conventional farms in the same years. Here’s an excerpt from his summary:

In the vast majority of cases national organic average yields are moderately to substantially below those of the overall, national average. Examples for row crops include Winter Wheat 60% of overall average, Corn 71%, Soybeans 66%, Spring Wheat 47% and Rice 59%.

A totally separate analysis, from researchers at the University of Minnesota, published in Nature, found that organic farms grow only around two thirds of the same amount of food, per acre, as conventional farms, meaning that they need one and a half times the land of conventional crops. The goals of organic are noble, but there’s simply no way to feed the world with yields so low, unless we’re willing to chop down all the forest that remains. Sparing forest means growing more food per acre, not less. More Foods, More Forest How do we grow yield? We could do it by lifting worldwide yields up to US levels. That would mean giving farmers in the developing world better access to fertilizer, pesticides, and irrigation that drive yields up in the US. Of course, organic advocates would prefer not to use more fertilizer and more pesticides. Is there another way? Perhaps – and GMOs may be key to that. So far GMOs have contributed only modestly to yield increases, but on the horizon are approaches that could make a big difference. Consider the yields of corn (the most grown crop in the US) vs. those of rice and wheat (the two most important crops for food supplies globally). Corn grows about 70% more calories per acre than rice or what. Why? Because it has a newer form of photosynthesis called C4. Now, funded in part by the Gates Foundation, the C4 Rice Project is looking to port the genes for C4 photosynthesis to rice. Other projects are looking at doing the same for wheat. Those would essentially be rice and wheat varieties with a tiny bit of the corn genome in them (about 0.1%). And they could lift yields by more than 50% on their own, and more in combination with other advances. They would also reduce water and fertilizer needs of rice and wheat. So – more food, less deforestation, less water need, and less need for synthetic fertilizer. Doesn’t that align with the goals of organic advocates? And is it really profoundly unnatural to create strains of rice and wheat that borrow just a little bit of corn’s genome? Better for the Planet Organic advocates also want less pesticide use, in part to reduce toxicity to the environment. Ironically, GMOs are already doing this. The National Academies of Science reportImpact of Genetically Engineered Crops on Farm Sustainability in the US says this in the summary:

Glyphosate (roundup) has a nasty reputation, but in reality, it’s dramatically less toxic than older pesticides like atrazine. And Roundup Ready crops have allowed glyphosate to almost completely replace atrazine on those fields. How much less toxic is Roundup than atrazine? About 200 times less toxic. Other GMO work on the horizon could address another complaint organic farmers have about conventional farming – the heavy use of nitrogen fertilizer that runs off and creates dead zones. GMO farming has already reduced runoff by encouraging no-till farming. But a more radical project is underway. Legumes like peas and soy don’t rely on nitrogen in the soil for fertilizer. Instead, with the help of friendly microbes, they extract nitrogen from the atmosphere, where it makes up 78% of the air we breathe. Another Gates-foundation funded project is looking at ways to give cereal crops – wheat, corn, and rice, for instance – that same ability to fertilize themselves from the air. Aren’t all of those things improvements? Better for the People Finally, there’s the health impact. Organic advocates want food that’s more nutritious. And they’re skeptical of the safety of GMOs. Yet the scientific consensus is that the GMOs we’ve approved for human consumption are entirely safe. Indeed, that consensus is at least as strong as the scientific consensus on climate change. Almost all GMO safety hysteria comes from a single media-manipulating lab, in France, which has had its work torntoshreds. Against that, hundreds of scientific papers have found GMOs safe. Looking at all that data, the American Association for the Advancement of Science concludes that GMOs are safe. So does the American Medical Association. So does the European Commission. Even the French Supreme Court threw out France’s ban on a GMO because the French government couldn’t produce any credible evidence that GMOs were a threat to the environment or human health. More importantly, GMOs aren’t just safe, they could boost nutrition. The Golden Rice project, which engineers rice to produce vitamin A in the edible grain (not just the leaf) could help 250 million children who have Vitamin A deficiency. (And for those fearful of corporate control over crops – Golden Rice will be free to virtually all farmers in the developing world, and freely replantable. Every biotech company involved, including Monsanto, has waved their patent rights in the developing world.) Beyond Golden Rice there are many more enhanced nutrition projects in the works. Inspired by golden rice, a team of Australian researchers in 2011 created an experimental rice breed that boosts vitamin A and also quadruples the amount of iron and doubles the amount of zinc in rice grains. An international team has taken the same ideas and applied them to Africa’s most common staple crop, cassava, which feeds 700 million people, and created BioCassava, a variant that has increased levels of vitamin A, iron, and dietary protein. So the next generation of GMOs could boost nutrition, reduce nitrogen fertilizer use, and boost yield, letting us feed the world without chopping down its remaining forest. Indeed, it’s easy to imagine ‘bio-organic’ farms that don’t use synthetic pesticides or fertilizer, but that do use these genetically enhanced seeds. Environmentally cleaner, better for the forest, more nutritious, and able to feed the planet. Aren’t those traits every organic advocate, every environmentalist, and, heck, every person in the world should welcome? ---- Ramez Naam is a computer scientist who spent 13 years at Microsoft. He’s also the award-winning author of three books. His latest, The Infinite Resource: The Power of Ideas on a Finite Planetcharts a course to overcome the real challenges of climate change, feeding the planet, and a host of other natural resource and environmental threats.