Ah, springtime: The sun is finally out, birds are chirping, buds are blooming — and your plans are likely getting rained on. Here’s why the onset of spring is followed by months of rain. 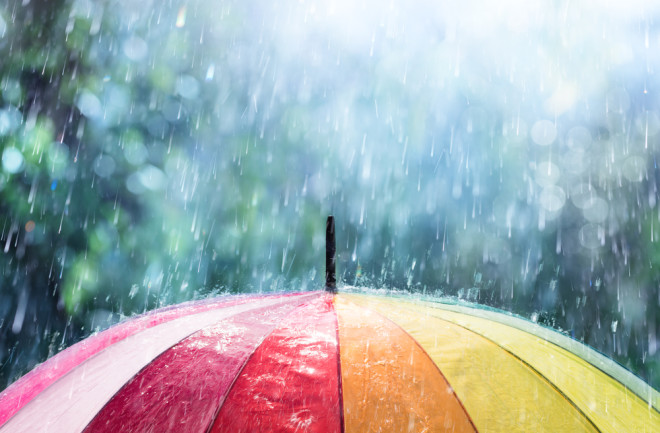 “April showers bring May flowers,” or so we’ve been told. Perhaps that's why each year in the Northern Hemisphere, the onset of spring brings predictably drizzly months.

Yet it's important to note that spring doesn’t occur at the same time across the globe. Changing seasons result from Earth's rotation around the sun, so the timing of a given season is dependent on which hemisphere you're in. In the Northern Hemisphere, each season lasts about three months with spring stretching between March 1 to May 31. The Southern Hemisphere experiences the opposite seasons, with spring falling between Sept. 1 to Nov. 30.

Overall, the Northern Hemisphere receives more rainfall than its southern counterpart. But what exactly causes these spring-specific showers in areas north of the equator?

A Transition to Summer

Whether or not a region is particularly rainy depends on where you live: Factors like latitude, elevation, prevailing winds and topography influence precipitation. This mix of ingredients positions the Northern Hemisphere to receive rain during springtime, especially the United States.

As it turns out, the mystery behind seasonal rainfall is actually relatively simple. The clouds above us form from water vapor that has evaporated from the Earth’s surface. During the spring transition from cooler to warmer temperatures, the air around us heats up. The cool, dry winter air combines with warm, humid incoming summer air. The mix of temperatures causes this air to rise, and moisture escapes in the form of rain.

This leads to an especially wet spring in the Northern Hemisphere due to a combination of ideal temperature conditions, proximity to mountain ranges and prevailing winds.

And when summer finally approaches, the spring showers turn into occasional rainfall as temperatures increase.

Spring in the Southern Hemisphere

While it does rain in the Southern Hemisphere during their springtime, the showers don’t happen everywhere.

According to Trenberth, the configuration of continents versus ocean is rather different south of the equator: The continents are subtropical and the main storm tracks sit at higher latitudes than in the Northern Hemisphere, meaning that areas like New Zealand, Tasmania and southern Australia, southern Africa, and southern Chile and Argentina experience spring storms the most.

In the U.S., storms move from the Pacific to the eastern region, while picking up plenty of moisture from the Gulf of Mexico. This can often lead to tremendous thunderstorms and tornado outbreaks.

Opposing climate patterns in the Pacific Ocean known as El Niño and La Niña can also impact weather conditions worldwide. El Niño occurs when surface waters are warmer than usual around the Pacific Equator. In contrast, Trenberth describes La Niña as when conditions are colder than normal in the tropical Pacific but warmer near Indonesia. In fact, predictions this year call for a more vigorous tornado season than usual because of the La Niña pattern, he says.

A Future of Altered Seasons

Climate change-induced global warming has provoked a shift in seasons around the world. With shorter winters and relatively early springs, rising temperatures are also disturbing weather patterns: As the world warms up, more water evaporates, leading to more moisture in the atmosphere over the oceans.

This triggers more intense rain and can spark more storms and increase the risk of spring flooding. Conversely, balmier months may bring less rain in the future — it all depends on where you live.