Why Are Sea Urchins So Destructive to Kelp Forests?

California researchers are closing in on the missing puzzle piece to a persistent ecological problem. 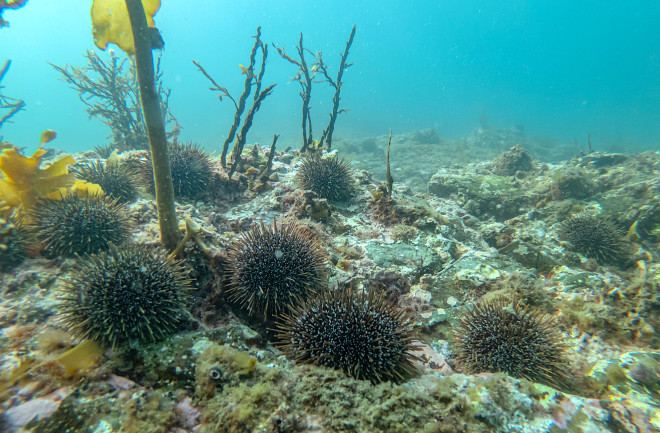 From the coast of Southern Africa to Southern Alaska, sea urchins and kelp coexist peacefully — until they don’t. In recent decades, more and more kelp forests have been razed by the hungry urchins. In these places, “urchin barrens” have replaced once lush and diverse ecosystems.

“At its worst, it’s urchins as far as the eye can see. They’re literally stacked on top of each other vying for space,” says Mae Rennik, a Ph.D. candidate in ecology and evolutionary marine biology at the University of California, Santa Barbara. “These shifts can happen very quickly.”

So what ultimately tips the scales? This summer, Rennick and her colleagues published a paper in the journal Ecology that provides a clue: In healthy kelp forests, urchins feed mainly on detritus, or scraps of kelp that shed naturally from the giant algae. However, when detritus is scarce, urchins begin to feed on living kelp.

Research biologist Dan Reed has been thinking about urchins and kelp for more than 40 years. In the 80s, he noticed something that begged an explanation: One of the scientist's sites at San Nicolas Island off the coast of southern California had transitioned back and forth between kelp forests and sea urchin barrens — all without any change in urchin density.

This simple observation was a hint. Urchin barrens could not be explained by overpopulation alone. Something else was driving the process.

In 1985, Reed and his colleagues published a hypothesis: If detritus was plentiful enough to feed a given urchin population, the creatures would consume the kelp scraps from the safety of cracks and crevices in the ocean floor — away from predators. However, if the supply of detritus was not enough, the urchins would emerge from safety and feed on standing kelp.

Thirty-seven years later, Reed is a co-author on the paper that Rennick and Bart DiFore, a Ph.D. candidate in ecology, evolutionary and marine biology at UC Santa Barbara, published along with their colleagues. Using a combination of approaches, the team tested Reed’s decades-old hypothesis.

The first step in the process was deceptively simple. The researchers gathered urchins into tanks and fed them kelp. Some tanks were stuffed full of the spiky herbivorous invertebrates, while others were sparse. The researchers wanted to know if the urchins' feeding behavior would change based on their population density — it did not. Regardless of how many neighbors were piled on top of them, the urchins ate at a steady rate.

Next, the scientists applied their new model to historical data. A lot of historical data. For 22 years, students and researchers led by Reed have monitored the abundance of giant kelp, red urchins and purple urchins at nine sites along the coast of Southern California.  “A lab experiment can only tell you so much,” Difore says. “But being able to pair it with a long term data set like this is really powerful.”

The researchers extracted robust support for Reed’s hypothesis from this wealth of data. A model that took into account the supply of detritus fit the data much better than one based on urchin prevalence alone. And, for the first time, they were able to assign rough numbers to the phenomenon.  “When there was less detritus than the urchins can eat there was, on average, a 50-fold decrease in kelp biomass,” explains Difiore. “That’s a big shift.”

Where kelp forests are healthy, they are diverse and productive ecosystems. They provide livelihoods and habitat to marine plants and animals, and they benefit humans too. Like terrestrial forests, kelp forests sequester and store the atmosphere’s most abundant greenhouse gas: carbon dioxide. They also provide fish for indigenous communities, the fishing industry and outdoor enthusiasts alike.

But in places where urchins have stripped entire stands of kelp, these benefits disappear. And once an urchin barren has been established, it tends to persist. “These urchins can survive without eating much for a long time,” Rennick says. “Once it flips to an urchin barren, there’s really no chance for the kelp to come back.”

Rennick describes the process as “feedback loop after feedback loop.” As the urchins eat standing kelp, the supply of detritus is decreased, which in turn causes the urchins to consume more standing kelp. As the forest disappears, there is less habitat for urchin predators such as lobsters, which allows urchin populations to grow even larger.  “The urchins stay there until they get to a density threshold that allows for disease or some other control to come in,” she says.

As the relationship between urchins and kelp becomes clearer, more and more research is focused on remediation. How can humans intervene to foster healthier kelp forests?

While the underlying drivers of urchin barrens are coming into focus, it is still unclear what might restore them to kelp forests. But scientists like Rennick are hopeful that the answer is out there. “We know urchins and kelp can coexist in a sustainable way,” she says. “Hypothetically, there is a way to do this effectively.”