Whispers of Ecological Change in the Arctic Are Trying to Tell Us Something. Are We Listening? 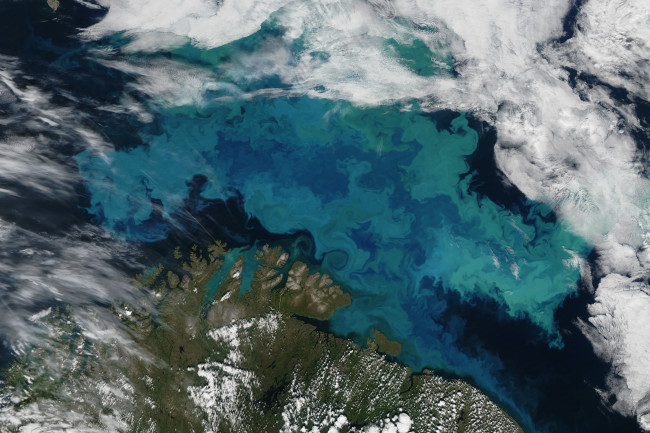 Brilliant shades of blue and green explode across the Barents Sea north of Norway and Russia in an image acquired on August 14, 2011, by NASA's Aqua satellite. The color was created by a massive bloom of phytoplankton, which is common here in August. (Source: NASA Earth Observatory) Editor's note:

Following the recent announcement by NASA and NOAA that 2014 was likely the hottest year on record a loud controversy erupted over global warming. As DotEarth blogger Andrew Revkin pointed out, the fight was a distraction from the clear-cut, long-term trend of rising temperatures. The noise about global warming overall has also tended to drown out relative whispers of subtle — but significant — change taking place at a variety of scales in the Arctic. These range from tiny organisms living underneath sea ice, all the way up to charismatic creatures like reindeer and walruses, as well as the food webs of which these living things are a part. One example of the ecological whispers coming from the Arctic: Recent research has shown that warming in the Barents Sea north of Norway and Russia has caused an increase in the productivity of phytoplankton, tiny photosynthesizing organisms that sustain aquatic food webs. You can see a big, beautiful — and natural — bloom of phytoplankton in the satellite image above. Satellite imagery and other forms of remote sensing comprise a powerful tool for monitoring the Arctic. But scientists also have been digging beneath these broad views and turning up other evidence of change.

one of two master’s students who joined me in Tromsø, Norway to attend the Arctic Frontiers conference in January, 2014. It is supplemented with some additional reporting by me. McGaha's trip was made possible by a grant from the University of Colorado's Center for Environmental Journalism.

One example is the work of Brage Bremset Hansen, a population biologist at Norwegian University of Science and Technology, who spoke at the Arctic Frontiers conference in Tromsø, Norway in January. Hansen has been exploring the ecological impacts of changing weather patterns in the Arctic archipelago of Svalbard, Norway. And in January and February 2012, he got a particularly good opportunity. At that time, wet and warm conditions created a textbook example of what’s called a rain-on-snow event. These ROS events occur when temperatures jump above freezing, allowing precipitation to fall as rain instead of snow. When temperatures cool below freezing, a thick layer of ice forms over the surface, creating a cascade of environmental effects, including mass mortality among reindeer. 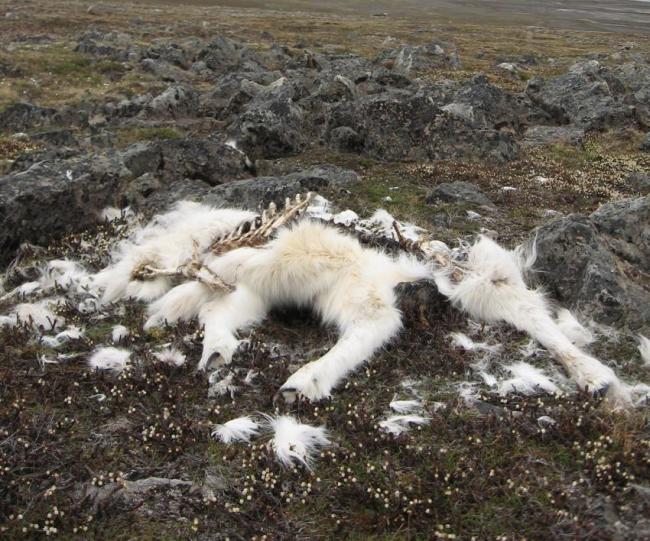 After heavy rain fell on Svalbard, Norway during the winter of 2011-2012, icing led to high, starvation-induced mortality among reindeer on the archipelago. (Source: Brage B. Hansen/Norwegian University of Science and Technology) The event in Svalbard occurred during the polar night in January 2011 and stretching into February 2012. It was extraordinarily extreme — the researchers estimate that something like it occurs only once every 500 years. As Hansen and his colleagues wrote in their paper published last November in the journal Environmental Research Letters:

In this normally cold semi-desert environment, we recorded above-zero temperatures (up to 7 °C) across the entire archipelago and record-breaking precipitation, with up to 98 mm rainfall in one day (return period of >500 years prior to this event) and 272 mm over the two-week long warm spell.

Seven degrees C is nearly 45 degrees F. Normal in winter on Svalbard is more like 5 degrees F. And 272 millimeters of rain is nearly 11 inches — a huge amount for a polar, semi-desert environment. On February 8, 2012, the maximum temperature at Akseløya in the archipelago reached 7.8 °C — the highest temperature ever recorded in Svalbard in that month. 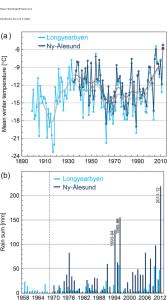 Top: Long-term December–February mean air temperature in Longyearbyen, Svalbard and Ny-Ålesund. 2011–12 highlighted in red. Grey curves: decadal variations. Bottom: total winter rainfall 1957-2012 in Longyearbyen and 1969–2012 in Ny-Ålesund. (Source: Brage B Hansen et al/Environmental Research Letters) The warm temperatures appear to be part of a long-term pattern. Both in Longyearbyen, the main town in Svalbard, and Ny-Ålesund, site of a major research station, average winter temperature has increased by ~4–5 °C since the mid 1990's, according to the researchers. This has brought an increased probability of above-zero temperatures and winter precipitation falling as rain. In February, 2012, the extreme warm spell was immediately followed by a cold period, with maximum temperatures of −10 degrees C or lower (14 F). This caused significant icing. Hansen has catalogued some of the impacts that this series of events caused. One of the most dramatic was startlingly high reindeer mortality. It occurred because much of the plant material the animals depend on for food became locked away in a layer of ice rather than softer snow. In his talk at the Arctic Frontiers conference, Hansen showed pictures of starving reindeer chomping unpalatable kelp from the shore, and attempting to reach dangerous mountain-goat heights to find vegetation still free of ice. Other impacts included washed out infrastructure on the islands, and potential threats to migratory species. These events have already become much more common in recent years and may signal a new normal, Hansen says.

As many experts pointed out during the conference, the Arctic is not really one place. It's a vast region with conditions that vary widely. And it turns out that just as too much ice can be a problem in some places and for some species, too little ice can be just as troublesome in other cases. George L. Hunt, Jr., an ecologist at the University of Washington, is concerned about the loss of ice in the Arctic ocean — and the decline of creatures that depend on that ice to survive. While polar bears tend to come to mind, other species may be even more threatened, he said in his talk at the conference. The walrus is among them. Polar bears actually spend a good deal of time on land. But walruses are even more dependent on extensive areas of sea ice while hunting and providing for their young. Walruses typically dive to the bottom of the ocean to search for clams, snails, worms and other tasty snacks during the summer and autumn. It can be exhausting work, even for animals as robust as walruses. So they typically rest between dives on floating sea ice. But as sea ice has shrunk in the Chukchi Sea north of Canada and Alaska, walruses have found their resting places disappearing. So they've periodically hauled out on land instead. 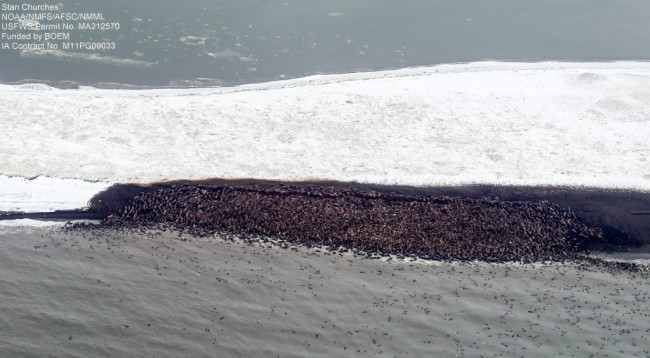 Thousands of Pacific walruses haul out onto a remote barrier island in the Chukchi Sea, near Pt. Lay in Alaska in September of 2013. (Photo: NOAA Fisheries. ) This phenomenon made headlines last September when an estimated 35,000 walruses hauled out near Point Lay Alaska. And it wasn't the first time, as the image above shows. It's an aerial photograph of walruses hauled out in the same area in 2013. 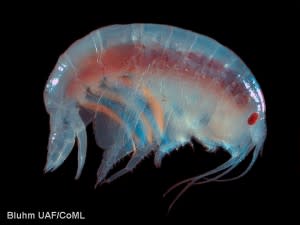 Onisimus glacialis, a common amphipod found only in association with Arctic sea ice. (Source: Bodil Bluhm, University of Alaska, Fairbanks) There can be trouble with so many animals crowded together in such tight confines. Walruses are highly sensitive to any kind of disturbance. So when an airplane zooms by, for example, or when there is another other kind of disturbance, it can cause a walrus stampede toward the water – crushing newborn calves in the process. During his talk at Arctic Frontiers, Hunt said he’s also concerned for the fate of less charismatic creatures, including a variety of amphipods — tiny shrimp-like crustaceans. Some spend their entire life cycle attached to the underside of sea ice. As sea ice dwindles over decades of future warming, these species may disappear entirely, he said. That might be a problem for other creatures in the ecosystem, including fish and birds, which may depend on eating certain species of amphipods. It could also affect smaller organisms that depend on the ability of amphipods to chew up and process small animals or algae into smaller, edible morsels. “Where the summer ice disappears, they’re stuck,” Hunt said. Hunt said he’s also concerned that as sea temperatures warm, other creatures may invade Arctic ecosystems to find more comfortable habitats. That could shake the foundations of already shaky Arctic ecosystems. “If subarctic species come into the Arctic, there’s a fair chance that they will either compete with or eat some of the species that live up there,” he said.

The Other Gas Problem

As warming Arctic temperatures have caused floating sea ice to thin and shrink in extent, oil companies have focused their attention on large reserves of oil and gas believed to reside there. This has sparked concerns about the environmental impacts of exploiting fossil fuel reserves in what continues to be a very harsh environment. But the Arctic also faces a more subtle gas problem: As oceans warm, methane gas trapped in the Arctic seabed has become more likely to bubble up to the surface. That’s a problem because as a greenhouse gas, methane is 20 to 30 times as potent as carbon dioxide. So it has the potential to exacerbate global warming — which would stimulate yet more methane release. But that’s not the end of the methane story, according to JoLynn Carroll, a geochemist at the Arctic University of Norway in Tromsø. 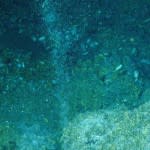 Methane gas bubbles rise from the seafloor amidst a community of mussels north of Cape Hatteras along the U.S. coast. (Source: NOAA-OER/BOEM/USGS) Seafloor exploration has revealed entire ecosystems that are adapted to harvesting methane leaks as an energy source. These ecosystems are different from the sunlight-based ones we’re used to here on the surface. They use a process called chemosynthesis instead of photosynthesis. Click the thumbnail at left to see an example off the U.S. coast. Researchers have discovered such seeps on the seabed up in the Arctic too. But the organisms that harvest energy from methane at these seeps — including bacteria, tube worms, and bivalves — are poorly understood. And that means it’s still unclear what will happen to these creatures as warming continues. Will they expand their reach, soaking up more methane and reducing greenhouse gas leaks? Scientists just don’t know. Carroll is trying to catalogue and describe these creatures in hopes of providing a better understanding of the impact they may have in a rapidly changing Arctic. So far, her team has identified three species brand new to science. Beyond that, Carroll said it’s hard to know what they’ll find.

Overall, these and future lessons from ecology will help enrich not only our understanding of the changing north, but our imagination of what a future of climate change could really mean for life on this planet — including us. That’s why it’s important to dig beneath the satellite imagery. Taking a bird’s-eye view is important too, but let’s not forget to take a worm’s-eye view as well.