Your garbage disposal sends waste to the same place your poop goes, which is to say, a number of different places. 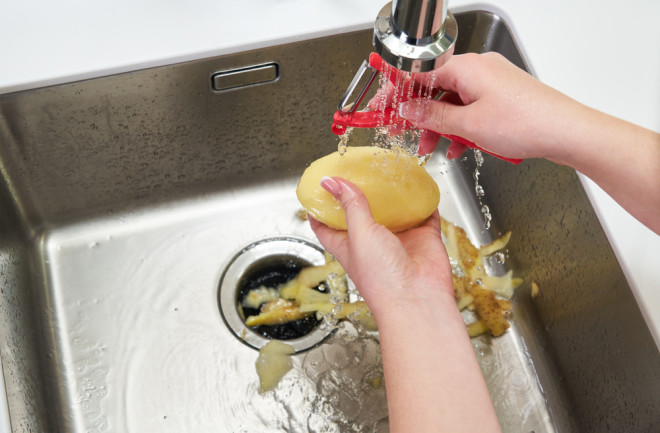 Flushing food scraps down the garbage disposal in your kitchen can be borderline therapeutic. No digging out the potato peels or apple cores — just mash them down the drain, turn on the appliance and hear the sweet sound of your problems disappearing.

Of course, the food doesn't actually vanish. More specifically, it goes to a local wastewater treatment plant, where all the water coursing through your home plumbing ends up.

Truthfully, washing away your troubles this way can cause issues elsewhere: Some municipalities say their water infrastructure isn’t designed to handle all the food waste every given household might create. But wastewater treatment plants do have systems to cope with food and other solid materials that come their way. And as people look to reduce how much food waste they put in landfills, cities are eyeing wastewater treatment equipment as a potential solution.

Each American wastes on average just under a pound of food a day. If all that volume went down garbage disposals and into aging wastewater infrastructure (which is already struggling to keep up with daily demands), your city could have an expensive plumbing disasters. “[Sewer systems] were designed for restroom sewage, but not the incredible amounts of food waste we have today,” says Joe Rasmussen, an environmental program manager with CalRecycle, otherwise known as California's Department of Resources Recycling and Recovery.

Concerns over food damage in the sewer system led New York City to ban in-sink garbage disposals from the 1970s until 1997. Though the devices are legal again, some buildings in the city still prohibit them because of old pipes. Vermont, a state that bans food waste going into landfills, also encourages residents to avoid putting food down the drain to avoid costly clogs. Composting can be a viable and sustainable alternative for most food waste. But plenty of people still opt for the convenience of a garbage disposal.

Read More: Cities Are Eliminating Your Excuses to Skip on Composting

Assuming it’s not fished out of sewer systems as part of a food-based blockage, whatever goes through your disposal system gets churned with all the other material heading into wastewater treatment plants. The slurry has a few final destinations, depending on where you live.

Landfilling sludge is one option; incineration is another. Burning the waste releases carbon dioxide and leaves behind ash, which might be sent to the landfill or recycled into construction materials. Other pollutants like heavy metals that can be in the slurry might come out of incinerators as well.

There are also two slightly more complicated processes that the waste slurry might go through. About 8 percent of wastewater treatment plants across the U.S. feed sludge into anaerobic digesters — tanks fostering bacteria that thrive without oxygen and break down waste full of carbon, like food, oils or poop. The microbes produce the two greenhouse gases, carbon dioxide and methane. When the second gas is isolated, it can be burned off as a power source.

Facilities might also opt to suck out the moisture and turn the solids parts of sludge into a fertilizer replacement called biosolids. Since some of what flows through sewer systems was alive at one point, the waste still has nitrogen and phosphorus in it — two of the key elements in fertilizer. But sewage-based soil additives can carry all the other materials our waste holds, like pollutants, industrial chemicals and pharmaceutical residues. In 2018, the U.S. EPA Office of Inspector General recommended that the department do a better job of reviewing the contaminants that can show up in biosolids and evaluating whether they cause harm.

Even if local water authorities don’t want your dinner scraps flowing through pipes, it’s possible your food waste could still end up at wastewater treatment plants — just via a route that dodges the sewer system. In parts of Massachusetts, for example, waste companies collect food scraps from businesses, turn the trash into a slurry and deliver the mix to the local wastewater treatment plant’s anaerobic digester. The system — and others like it across the U.S. — tries to provide an alternative food waste destination besides landfills, where a majority of our uneaten meals end up.

In 2019, the EPA commissioned a report looking at the digester system in Lawrence, Massachusetts, to see how the protocol compared to the typical method used across the state a few years prior: incinerate and landfill all the food waste. The report tried to account for the major ways each food waste treatment might help or harm the environment, including the amount of pollutants released, the amount of energy used and how much drinkable water each one needed.

Ultimately, the researchers found that tossing food into the anaerobic digester had lower environmental impacts than throwing the scraps into landfills or incinerators. A good chunk of the reason why the giant digestion tanks were better was because the energy they produced could replace fossil fuels as a power source. Waste treatment plants that used anaerobic digesters used to see their byproducts as nuisances, says Cissy Ma, a research environmental engineer with the EPA who commissioned the report. “But now, the thinking is different," she says. "That’s energy you can harvest.”

The Massachusetts analysis focused on food waste trucked into wastewater facilities and doesn’t include information about how in-sink garbage disposals factor into sustainability issues, Ma says. While grinding food up and flushing it down the drain could cut back on the emissions connected with driving the scraps to a processing plant, in-sink disposals could also stress pipe infrastructure and require that much more sanitizing and separation treatment from wastewater facilities, Ma says.

Understanding the impact of tossing food into a garbage disposal would require a whole separate study — and might be something the EPA decides to look into one day. After all, “that's why we actually do the work,” Ma says, “because there were more questions the communities want to get addressed.”