When a Dominant Male Disappears, These Female Fish Change Sex 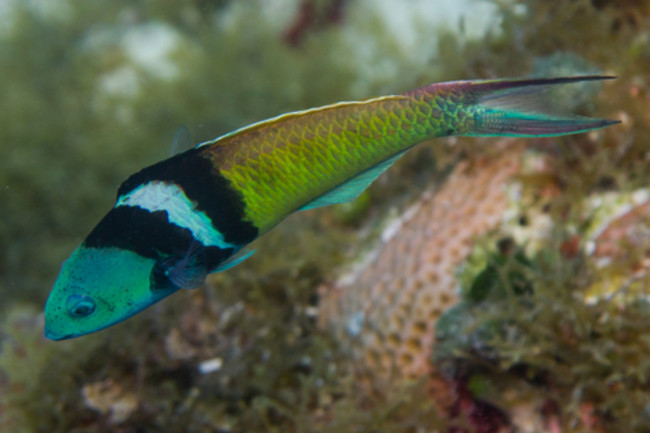 Sex transitions are commonplace for several species of fish, and that’s consistently puzzling for scientists. How these changes occur on a genetic level is still not fully understood, but a new study published in the journal Science offers some insights.

A team of researchers say they’ve found that social stressors may play a role in triggering a cascade of hormonal changes in the bluehead wrasse, a small, coral-loving fish that lives off the coast of Florida. They also found that this fish might be thinking with their, erm, gonads instead of their brains when it comes to changing their sex.

Every bluehead wrasse is born female, but as they develop, a dominant female emerges by showing behaviors, like courtship and aggressiveness — similar to male fish. When the timing is right, she transitions into a male over the course of 10-20 days. In this latest study, when scientists removed the dominant male from groups of wrasses in the reefs, it consistently left the remaining females in a stressful scramble.

The male’s absence triggered one of the remaining females to transform and take his place. To complete this transition, females completely shut down the production of aromatase, the gene responsible for making estrogen.

But for Erica Todd, a research fellow at the University of Otago in New Zealand, one of the most surprising findings was that the transformation required a complete rewiring of the gonads — instead of the brain — for a female to become male.

The scientists did measure a genetic change in the animals’ brains, but Todd says the results were subtle. Instead, the main difference in the females who transitioned into males was an increase in isotocin, which causes dominance and aggression.

Todd says the trigger for aromatase is unknown, but she suspects that stress may play role.

Whatever the cause, the sudden shut-off allowed the new leader to establish dominance within minutes of the male disappearing. And within four days, testicles started to form and were mature by day six — completely replacing the ovaries.

In previous studies of other sex-changing species, such as the Nile tilapia and the Japanese medaka, rising temperatures sometimes cause a stress response that triggered a transition as well. Todd suspects that this could be the case with the bluehead wrasse, too, although social factors seem to be the main cause of stress instead of temperatures.

For this study, the researchers didn’t measure cortisol levels, a common indicator of stress, but Todd sees that as an avenue to expand. The team would also like do more targeted research on the fishes’ brains to better track the hormonal changes, especially since the animals transition so fast.

“Although we know that the loss of a dominant male initiates sex change in a female, we still don’t understand how this visual cue is interpreted in the brain,” Todd says. That is, they still don’t fully understand how those social signals are transmitted to the gonads, which undergo the most dramatic change.