La Niña is tipping the odds in favor of certain outcomes. Unfortunately, that's bad news for the Southwestern U.S. and large parts of California. 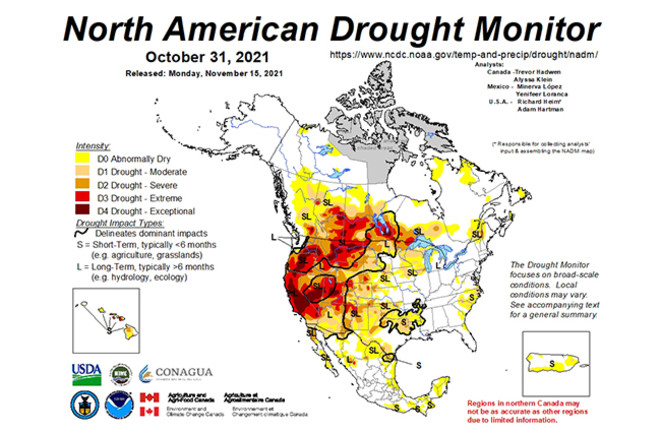 Will the serious drought conditions afflicting large swaths of western North America, as seen in this drought monitor map, improve this winter? And what about temperature? Where is it likely to be warmer or colder than usual? Keep reading to find out. (Credit: NOAA)

With the winter weather season upon us, farmers, water managers and ordinary citizens are fervently hoping for relief from moderate to severe drought conditions afflicting more than 25 percent of the North American continent.

That percentage represents a slight improvement from July, when more than 28 percent of the continent was in drought — the highest since these analyses began in 2002.

Will we see continued improvement, and where might that be likeliest to happen? What about temperature — which in the parched Western United States, is particularly tied to drought? What should we expect?

Long-term forecasting, even on a broad scale, is typically fraught. That's because the climate system is very complex, and natural variability on the timescale of just a few months plays a very big role.

But this year, forecasters have had help from the second La Niña winter in a row. This climatic phenomenon "often exerts a significant influence on winter climate over North America," according to Mike Halpert, Deputy Director of NOAA's Climate Prediction Center. "This influence results in enhanced predictability, as the patterns of both temperature and precipitation during most episodes share many features," Halpert says, writing in NOAA's ENSO Blog.

For North America as a whole, here are those patterns of temperature and precipitation for La Niña winters:

What about for the United States specifically?

In October, NOAA released its Winter Weather Outlook addressing that question. And now, in his ENSO Blog post, Halpert has provided an even more up-to-date analysis. The summary that follows of what the coming winter may bring draws on both.

Given typical La Niña conditions during winter months, plus the impact of a warming climate, the odds favor above normal temperatures across most of the contiguous United States. Below-normal temperatures are expected in only a relatively small portion:

The map above depicts the chances that conditions will be colder or warmer than usual, given in percentages. The darkest red portions show where the chances for unusual warmth exceed 50 percent — namely, in parts of the deep South from Texas to North Carolina, and in New England. In other areas shaded in warm colors, higher than normal temperatures are still favored, but there is greater uncertainty in the forecast.

The blue colors show that probabilities are tilted toward colder-than-normal temperatures along the northern tier of the contiguous United States, from the Pacific Northwest to the Dakotas. Below average temperatures also are expected across much of Alaska. But forecasters are less confident in these regions.

In the white areas, there are equal chances for unusually cool or warm conditions.

There's a modicum of good news for the drought stricken Northwest: The odds tilt toward a wetter than normal winter there. The same is true for the northern Rockies, and around the Great Lakes and the Ohio Valley:

But confidence in the predicted outcomes in these regions is not terribly great, with probabilities lower than 50 percent.

Meanwhile, as seen in the map above, drier than normal conditions are expected across the southern tier of the United States. Southern Alaska also is expected to be on the dry side.

For large parts of drought-stricken California, the precipitation outlook is particularly grim.

In October, an historic storm blanketed California's Sierra Nevada mountains in snow. But as seen in this animation comparing snowpack moisture on October 28th and November 29th, much of that bounty has now been erased. In a typical year about 30 percent of Californian's water comes from Sierra Nevada snowpack. (Credit: Images from National Weather Service NOHRSC. Animation by Tom Yulsman)

Hopes for an end to a debilitating two-year drought in the state were sent soaring by a Pacific storm system in October that dumped historic amounts of rain and snow. But November has brought mostly dry conditions. This has caused a healthy blanket of early snowpack in the Sierra Nevada mountains to shrivel dramatically, as seen in the animation above.

As of the end of November, the entire state remains in drought, with 28 percent afflicted by exceptional drought, the U.S. Drought Monitor's most severe category.

La Niña typically favors a dry winter across the southern half of California, as reflected in NOAA's winter weather outlook. And to make matters worse, recent research suggests that the drying impact on California and other parts of the United States can intensify in the second year of a "double-dip" La Niña, like the one we're in now.

The precipitation outlook for the Southwestern United States and the Colorado River Basin also is particularly concerning.

The region has been enduring a multi-decadal megadrought, the severity of which hasn’t been seen since the 1500s. Last July, this caused the water level in Lake Mead on the Colorado River, the largest reservoir in the United States, to reach an historic low, triggering the first-ever shortage declaration by the federal government.

Thanks in large measure to La Niña, some improvement to drought conditions is expected from Northern California up through the Pacific Northwest and into the Northern Rockies. Improvement also is forecast for parts of the Upper Midwest. But drought is expected to continue across much of the West — including the Colorado River Basin, which is currently enduring a multi-decadal megadrought. (Credit: NOAA/Climate.gov)

As the U.S. drought outlook map above shows, the region is unlikely to see any drought relief this winter. And the odds favor an expansion of drought to the east into Texas.

Again, it's important to keep in mind that these projections carry varying degrees of uncertainty. That's why they are presented as probabilities. And that means some forecasts won't pan out.

But as NOAA's Mike Halpert puts it, over the long run, "these outlooks have proven to have skill, so that while some will 'bust,' enough will be correct for the user to come out ahead."