It alludes to a specific type of farming that could have significant benefits to the ecosystem that houses our favorite caffeinated beverage. 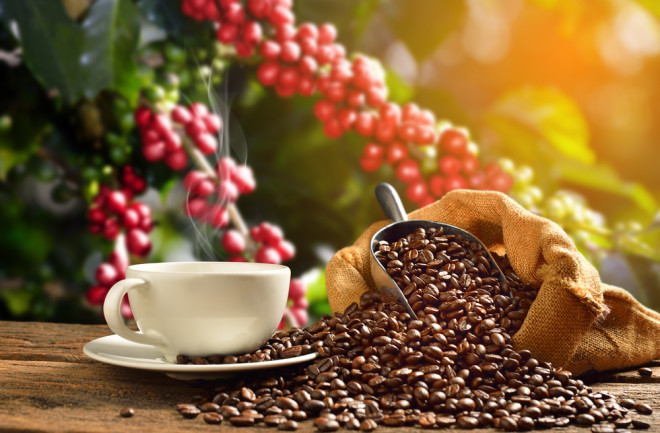 The coffee aisle at your local supermarket might be growing increasingly complicated. Not just in the number and variety of brands, but in the packaging claims as well: what the beans taste or smell like, how they were roasted, and maybe even how they do or don’t impact the environment. And if a bag says "shade-grown coffee" — alluding to the kind of ecosystem the beans grew in — that's a selling point the brand might want to lure you in with.

Shade-grown coffee, in a way, tries to put coffee plants back into the environment they came from. Having diverse plant life living side by side, root by root comes with benefits for coffee and the ecosystems themselves. But the positive qualities of shade-grown practices might not extend as far as companies might make it seem.

Back to the Origins

Long before humans farmed coffee, the plants were integral to forests across Tanzania, Madagascar, Ethiopia and Cameroon, living in the shadows of taller plants. The part of the plant humans covet, the beans, are actually fruit pits: They grow in clusters of bright red pods, which some people call cherries.

Since the wild versions of the crop funnel energy into the cherries only as a way to make more versions of themselves, the trees might not produce as many coffee beans as farmers — and the ever-growing demand for caffeine — might want. Some smaller operations and families still harvest from plants that spring up naturally among other foliage. Otherwise, the majority of the world’s coffee comes from a set up that people started to pursue more aggressively in the 1970s: all other vegetation gets cleared away and densely-packed coffee trees grow together out in full sun.

The tactic might maximize the amount of coffee a farmer can extract per acre of land, but culling away the other native plants strips coffee trees of protection. Taller forest companions aren’t there to shade the trees from excessive heat. Instead, without an enclosure of branches, water evaporates faster, sapping the plants of the humidity levels they need. Burning temperatures and water loss could be particularly challenging as global warming continues. Parts of prime coffee-growing regions across Africa, Central and South America are heating up, potentially beyond the range trees can tolerate. Rainfall in fruitful regions is changing too, with some areas getting too little. The rising temperatures also mean the livable range for the coffee borer beetle, one of the most destructive coffee pests, is expanding.

Keeping some (or all) of a forest around the coffee plants — in other words, maintaining shade-grown coffee — could dampen the effects of climate change. The foliage cools the trees and keeps moisture around for longer, while potentially hosting the birds and ants that prey on coffee borer beetles. That the shade trees encourage animal and arthropod residents explains another feature of growth setups: They allow farms to preserve more of the original, rare ecosystems coffee grows in. Though native to Africa, other parts of the world with the right and rare kind of climate will also grow the bean. In Mexico, for example, coffee plantations show up in cloud forests — dense vegetation heavy with fog and cloud cover. The ecosystem holds the highest concentration of plant and animal diversity in the country while only comprising one percent of its land.

In settings where at least some native vegetation accompanies the coffee plants, ecologists have found that shade-grown coffee farms offer sanctuary for pollinators that foster orchid diversity in Mexico, attract the fluffy primate known as a slow loris in Java, hosts a wider range of ants than full-sun coffee in Colombia, and across Latin America, welcomes permanent and migratory birds. Avian support in particular might attract your attention on store shelves — some shade-grown coffees also advertise as certified bird friendly varieties, meaning the plots meet the Smithsonian Institution’s qualifications as organic farms that provide enough habitat for local species.

Because buyers appreciate the environmental and ecosystem services shade-grown coffee provides, farmers can charge more per pound. The price difference can also offset the extra cost of growing this kind of coffee. It takes more land to produce the same number of beans as a sun-grown field might yield, and farms have to take the time to prove they meet certification standards if they choose to also qualify as organic or bird friendly.

But the cost difference doesn’t necessarily trickle down to the farmhands themselves — the people doing the challenging manual work of collecting the beans. That “shade-grown” label, or other sustainability claims, don’t apply across all parts of a food production process can sometimes confuse consumers. “There has been considerable work looking at how labels, such as being sustainable or bird friendly, inadvertently convey a sense or an assumption of social responsibility, which is not often the case,” says Estelí Jiménez-Soto, an ecologist at the University of California Santa Cruz.

Misunderstandings about how these labels work can go the other way too, with people thinking organic also means quality bird habitat. In a recent survey of birders where the researchers asked respondents about their thoughts on bird friendly coffee, nearly half said that the coffee they bought had to conserve migratory bird habitat. But only 9 percent had ever bought bird friendly varieties. Because the birders were way more familiar with the idea of organic or fair-trade coffees, the authors figured there must have been some confusion. “We speculate this gap may be due to some respondents believing, perhaps incorrectly, that other certified coffee or coffee products they buy conserve migratory bird habitat,” they write.

Jiménez-Soto saw the disconnect between the shade-grown label and employee welfare herself when she worked on a shade-grown coffee farm for several months. Collecting beans from shade-grown facilities is physically more challenging — after all, the set-up is meant to mimic an actual forest. More branches and leaf litter are in people’s way. Workers have to navigate around snakes and ants, which at a minimum are annoying to work around and could potentially be dangerous. Some farms prune back the shade trees as they grow, meaning workers use machetes and sometimes get injured.

For all that work, employees might end up with less earnings at the end of the day. Depending on the time of year, workers are paid per basket of beans delivered. Navigating other trees and wildlife makes harvesting shade-grown beans more time consuming. Unless farm owners pay more for each haul than sun-grown farm owners do, employees walk away with a lower income.

If the extra cost of shade-grown coffee doesn’t make it down to farmhands, the farming practice itself isn’t to blame. “That is not necessarily a problem of growing in shade, but it's more of an institutional issue,” Jiménez-Soto says, “of having necessary mechanisms for those funds to materialize as improved welfare of farmworkers.” Though there’s no certification standard that speaks to shade-grown coffee that also ensures ethical employee treatment, Jiménez-Soto recommends buying from brands that have good relationships with the farms and people growing the beans — something you might find in smaller-scale coffee roasters.

Conservation programs like shade-grown coffee initiatives stem from wanting to keep ecosystems intact, but have historically struggled to acknowledge the needs of humans living and working in those landscapes. “It's really just more recently with agro-ecology and the conservation term that we are paying more attention to what these different labels and this different projects around biodiversity conservation mean for people that make a living in those spaces,” Jiménez-Soto says. “And not just make a living in those spaces, but also make meaning to those spaces.”