What Microbes Are Growing In Your Office? Science Wants to Know 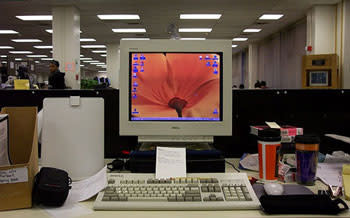 You basically live here. What else does?

Refrigerators, indoor pools, airplanes, daycares, public bathrooms, shower curtains, water heaters, pillowcases---these are just a few of the places swabbed by enterprising biologists looking to understand the microbes that live with us

. By identifying the bacteria, archaea, molds, and other creatures picked up on their swabs (and there are plenty---we live in a sea of mostly harmless, possibly beneficial microorganisms), microbial ecologists have started to describe the indoor ecosystems in which we spend most of our lives. The latest study

to probe this, published in PLoS ONE, looks at the place where most of us spend the majority of our waking hours: the office. The researchers swabbed the chair, desk, phone, keyboard, and mouse of 90 offices in San Francisco, New York, and Tuscon (30 per city). The phone and the chair had the most bacterial cells on them, mostly bacteria from soil or bacteria known for living in or on people's noses, skin, and guts. Offices belonging to men had more cells than those belonging to women, perhaps because men, being on average larger, have more space for bacteria to live and thus might be supposed to shed more. In terms of the types of bacteria that lived in the offices, there were no major differences that correlated with the gender of the office's inhabitant. But offices in Tuscon had a very different bacterial make-up than offices in San Francisco and New York, with lots of bacteria usually found in sandy desert soils. The point of all these studies is not just to classify and describe the microbial life that swirls around humans. It's also to see how they might be affecting our health. Most of these critters aren't obviously making us sick, but scientists have long wondered whether having a certain balance of microbes in your environment, especially when your immune system is developing, could affect the development of allergies or asthma

. Air quality in offices is already known to be behind some illnesses

. While the field is still embryonic---most papers on indoor microbiomes just describe what's there, without being able to say why or what that means---perhaps the microbes living in your office will eventually taken into account as well.