What Do You Do With a Sunken Cruise Ship? 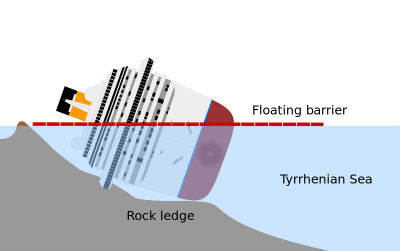 A schematic of where the Costa Concordia sits on the sea floor.

off the coast of Italy, clean-up crews are still puzzling over what to do with the gigantic wreck. And gigantic it is---with a gross tonnage

of it, that could gush into the Mediterranean. Since February 12, the Dutch film Smit has been vacuuming out fuel using a system of pumps and valves. Their work is especially tricky because the wrecked ship sits on the edge of a 200-foot underwater drop-off, and any disturbances can easily push it over. So to minimize the risk of destabilizing the ship while moving 500,000 gallons of oil out of it, Smit is pumping in seawater as it pumps out oil. Once the fuel is all extracted, crews salvaging the actual ship will have to contend with the precipitous problem too. The cruise's parent company recently invited 10 firms to bid on the clean-up operation. Charles Choi at

talked to some experts about possible solutions. The two most practical solutions seem to either be cutting up the ship into liftable chunks or refloating it to be towed away for scrap. Neither is easy, reports Choi. Cutting up the ship would require metal shears that can cut through 3 inches of steel and huge magnets 10 meters in diameter to pick up stray debris from the sea floor. Refloating the ship, which sank because of huge gashes in its hull, would need some major repair work first. But given the laughable actions of Costa Concordia's captain who got the ship into this mess in the first place---wine and a comely lady

play a part---we couldn't help but be intrigued by one of the more dramatic of the options that have been, ahem, floated:

An exotic solution would involve pumping air-filled polystyrene balls into the Costa Concordia to make it float to the surface, an idea tried in the past in Iceland and Kuwait. (A similar concept, using ping-pong balls, was actually first mentioned in a 1949 Donald Duck comic, and science fiction legend Arthur C. Clarke invoked a similar idea in The Ghost from the Grand Banks, suggesting billions of glass bubbles could raise the Titanic.) [International Salvage Union secretary general Mike Lacey] doesn't think much of this idea, either. "I haven't heard of them being used in years and years—they make a hell of a mess, since you can't control them, and they get all over the sea and every damn place," he says. "They're a real problem to clean up, so I don't think the authorities would take too kindly to their use here."