Whales Get Sunburns, Too 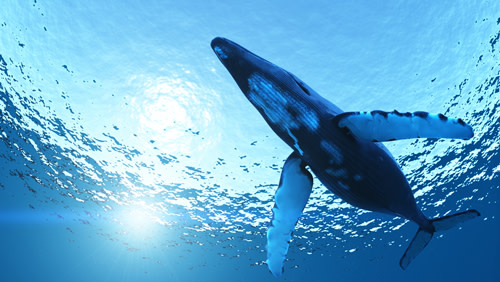 A trip to the beach may require an extra layer of sunscreen---and not just for you landlubbers. Marine biologists in Canada and Mexico have shown that increased exposure to the sun darkens certain whale species' skin. As in humans, UV rays trigger an increase of the pigment in whales' skin, creating a tan of sorts. In some cases they even burn and blister. And like people, whales accumulate such sun-caused damage to the DNA in their skin as they age. For three years, researchers took skin samples from blue, sperm and fin whales at various points during their sun-seeking annual migrations, and they published their results in Scientific Reports today. Blue whales are pretty pale, so during their sunny spring migration, the researchers found increases in pigment and the same kinds of DNA damage in sunburned human skin. Fin whales were the darkest; their skin was already heavily pigmented, so the researchers saw less color change and fewer blisters. Sperm whales tend to be in the middle in terms of pigment, but they also spend more time at the surface in the sun, so their skin reacted more strongly in response to the UV rays. Newcastle University researcher Amy Bowman explains in Science Daily:

"We saw for the first time evidence of genotoxic pathways being activated in the cells of the whales -- this is similar to the damage response caused by free radicals in human skin which is our protective mechanism against sun damage."

So despite living underwater, perhaps these thick-skinned mammals should consider slathering on some sunblock, too. Image courtesy of TsuneoMP/Shutterstock