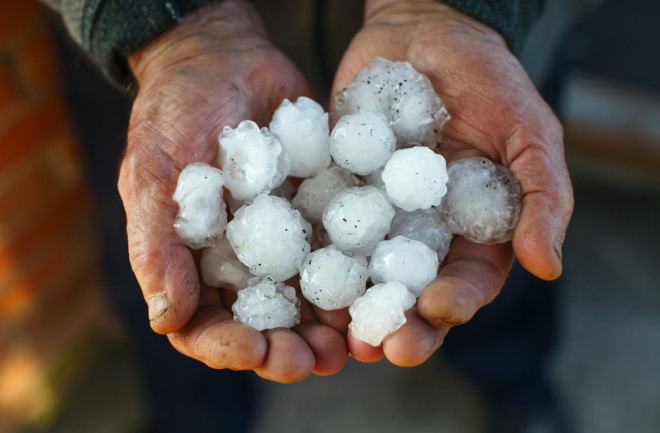 Come summer every year, a large swath of the country braces for hail. Known as Hail Alley, the region stretching from Wyoming to Texas receives more hailstorms, and more severe ones, compared to other parts of the country.

Features on land and in the atmosphere make perfect hail conditions for this part of the U.S. But living in the hail sweet spot can get inconvenient.

“My car got really dinged up the second year that I was here,” says Sam Childs, a researcher at Colorado State University. After that, "I decided I’d like to take a look at hail,” he says.

Damaged vehicles are one of many consequences of severe hailstorms. That's why researchers are trying to improve forecasts for the weather events, to better predict when and what type of icy disruption might be coming. The skill could get more valuable over time, as climate change might make hailstorms more common in the area.

For hail to hit the ground, there needs to first be a thunderstorm with strong upward winds. Those updrafts push falling raindrops backward, up into the atmosphere, until it gets cold enough for water to freeze. Like a ping-pong ball hovering over an air vent, the ice pellet falls and gets carried high by the upward winds over and over. The ice collides with other water droplets in the clouds along the way, building frozen layers and growing in size, until it’s too heavy for the wind to keep lifting and it falls to the ground.

Though Hail Alley sees ice fall relatively often, thunderstorms across the country build the tiny ice balls all the time, says Katja Friedrich, an atmospheric scientist at University of Colorado Boulder. But in most places, the air is too warm to keep the ice intact. It melts somewhere between the final drop out of the cloud and the ground. “Hail has been produced in thunderstorms in Florida and even in hurricanes,” Friedrich says. “But the problem is, this area is so warm that the hail barely reaches the [ground] or it just reaches the [ground] in really small pellets.”

In Hail Alley, conditions are cold enough to keep the ice solid. Additionally, much of the area is at a higher elevation, Friedrich says. Land in Colorado’s High Plains, for example, is closer to the source of the hail and gives ice pellets less time and space to melt before making contact with the ground. The region prepares for hail in the spring because that’s when warm air from the south and cold air from the north meet, creating perfect conditions for thunderstorms.

Since every thunderstorm is unique, every hailstorm is too. And about five years ago, the National Weather Service reached out to Friedrich to see if she might help keep track of one particular icy variable: how much hail accumulated on the ground.

Storms in Colorado sometimes dump huge volumes of tiny ice pellets, much like snow. ln some cases, so much hail will blanket roads in a short span of time that cities will have to get out snowplows that were already put away for the season to clear the streets.

Ideally, municipalities would be able to anticipate these hailstorms and prepare for them. So Friedrich and her research team set out to collect data on how much hail accumulates during different storms — a project they're still working on — and build prediction models that provide short-term forecasts on whether hail might fall and what it would look like. The work is still in its early stages.

“The more we investigate, the more questions we have,” Friedrich says. While the team knows many of the influential factors — like the amount of moisture in the clouds or how fast the storm moves — transforming those observations into a model that predicts what a result might be is challenging.

While Friedrich and her team iron out the details of predicting upcoming hailstorms, Childs is looking farther ahead. Knowing what these storms might look like farther into the future can help shape policies meant to address their harm — how insurance companies handle damages, for example, or what farmers might expect for ice-pelted crops.

Childs and other researchers have found that in the coming decades, climate change could push hailstorms to become more frequent and drop larger ice pellets in Hail Alley. One study Childs co-authored, for example, predicts three extra days of hail per year come 2100.

This shift seems likely because a few major hailstorm influences will grow stronger and more common over time. For one, a warming atmosphere will evaporate more moisture into the air. Increasing the amount of water in thunderstorms will potentially make them more likely to develop hail, Childs says.

Research also suggests the upward winds of thunderstorms might grow stronger in an increasingly warmer climate, allowing hail to grow larger and keep reaching the cold-enough atmosphere high above. Larger ice pieces, then, stand a better chance of coming all the way to land, boosting the likelihood that a given storm drops significant ice chunks.

These predictions don’t apply across all of the U.S., and hinge on calculations about future atmosphere conditions that may not pan out either. If lower levels of the atmosphere become increasingly moist, for example, hail could become less of a problem since higher humidity makes melting more common, Childs says. And there are caveats to making predictions about future hail events in the West based on data from storm levels in the past. As the areas became more densely populated over time, the likelihood of someone even being in a hailstorm path and reporting the event rose, too.

Regardless, hail research has gained attention in recent years. And maybe that’s because the storm impacts show an array of damaging consequences, from big hailstones smashing car windshields to tons of tiny pellets clogging storm drains and causing flooding events, such as the 2018 storm that killed animals and injured staff at the Cheyenne Mountain Zoo in Colorado. As Childs puts it, “I think people are realizing how dangerous hailstorms can be.”

Editor's note: this story has been updated with the correct location of the Cheyenne Mountain Zoo.