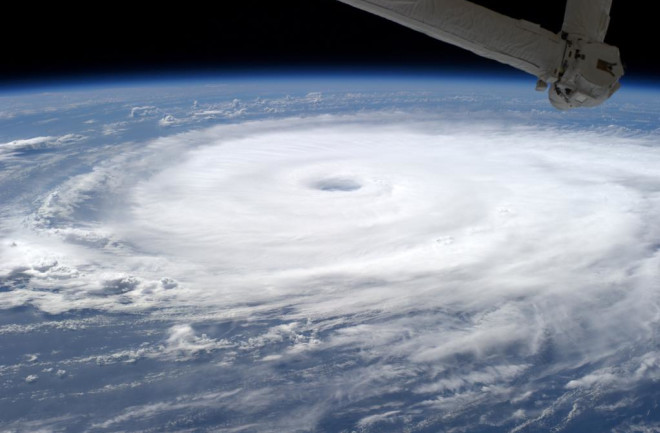 Alexander Gerst, an astronaut with the European Space Agency, took this photo of Hurricane Edouard from the International Space Station in mid-September, 2014. (Source: Alexander Gerst) For the ninth year in a row, the United States has gone without a major landfalling hurricane. This continues an amazing streak: Going in to the 2014 Atlantic hurricane season, it had been 3,124 days since the last Category 3+ storm had made landfall in the United States, according to Roger Pielke, Jr., an environmental studies professor at the University of Colorado (where I also work). Meanwhile, the story in Pacific this year has been quite different. No lull there. More about that (and a climate perspective as well) in a minute. But first, some details about the Atlantic: Overall, the 2014 Atlantic Hurricane season ended with below average activity. In total, there were eight named storms, six hurricanes, and two major hurricanes. That compares with the 1981 - 2010 average of 12 named storms, 6 hurricanes, and 3 major hurricanes. Another measure, called Accumulated Cyclone Energy, or ACE, came in at just 63 percent of average. “A combination of atmospheric conditions acted to suppress the Atlantic hurricane season, including very strong vertical wind shear, combined with increased atmospheric stability, stronger sinking motion and drier air across the tropical Atlantic,” says Gerry Bell, lead hurricane forecaster at NOAA’s Climate Prediction Center. “Also, the West African monsoon was near- to below average, making it more difficult for African easterly waves to develop.” Despite these conditions, some major storms did manage to blossom. The image above, shot from the International Space Station, shows one of them: Hurricane Edouard, which attained Category 3 strength last September. But going nine straight years with no major hurricanes hitting the United States is astonishingly unusual. As Jeff Masters of Weather Underground puts it, this marks:

. . . the first time since records began in 1851 [that] the U.S. has gone that long without a Category 3 or stronger hurricane hitting. The previous record was eight years, set in 1861 - 1868. Wilma of 2005 was the last major hurricane to hit the U.S., and was also the last hurricane to hit Florida.

Brian McNoldy offers this amazing perspective over at the Washington Post:

Another way to look at [these] statistics is that none of the last 25 major hurricanes in the Atlantic have made landfall in the U.S. According to Klotzbach, an average of 29 percent of all major hurricanes hit the U.S., so the odds of avoiding 25 consecutive storms [are] about 1-in-5,200.

Wow! In his comments, McNoldy refers to Phil Klotzbach, a research scientist who studies hurricanes at Colorado State University. Predictions by Klotzbach's group for a below average season were borne out, as were those by other groups, including NOAA's. McNoldy also cautions that the relative dearth of activity doesn't mean Americans are in any way "overdue" for landfalling hurricanes. "Unlike earthquakes, there is no built-up stress associated with a long period of hurricane-free conditions somewhere." But while we may not be overdue, we also shouldn't be complacent. "This will end," Pielke says. "We will have bad luck." What about the Pacific? Here's part of NOAA's roundup:

Meanwhile, the eastern North Pacific hurricane season met or exceeded expectations with 20 named storms – the busiest since 1992. Of those, 14 became hurricanes and eight were major hurricanes. NOAA’s seasonal hurricane outlook called for 14 to 20 named storms, including seven to 11 hurricanes, of which three to six were expected to become major hurricanes. Two hurricanes (Odile and Simon) brought much-needed moisture to the parts of the southwestern U.S., with very heavy rain from Simon causing flooding in some areas.

Unlike the Atlantic basin, conditions in the eastern Pacific included weak vertical wind shear, unusually moist and unstable air, "and a strong ridge of high pressure in the upper atmosphere that helped to keep storms in a conducive environment for extended periods," NOAA's Gerry Bell says. Climate news today is dominated by the U.N. talks in Lima, Peru, so I think a couple of things related to climate change and tropical cyclones probably bear mentioning. First, according to the latest major report from the Intergovernmental Panel on Climate Change:

Second, the report also concludes that:

No robust trends in annual numbers of tropical storms, hurricanes and major hurricanes counts have been identified over the past 100 years in the North Atlantic basin.

But the IPCC also points out that there has been a "virtually certain increase" in the frequency and intensity of the strongest tropical cyclones in the North Atlantic since the 1970s. All in all, a mixed picture. So keep that in mind if you read or hear any claims this week about hurricanes and climate change.