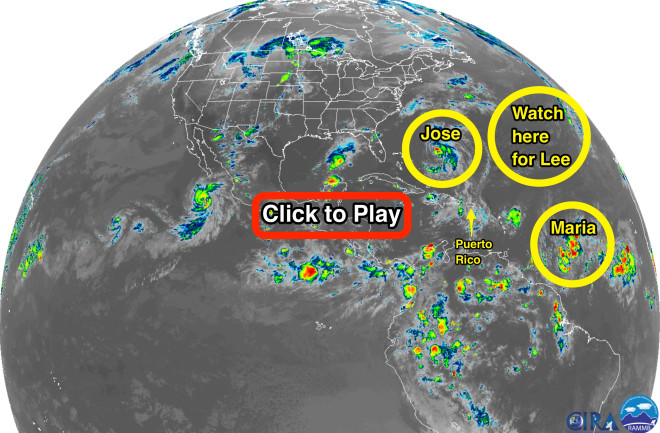 This animation of GOES-16 weather satellite images shows three hurricanes in the Atlantic between Sept. 16 and 26, 2017: Jose, Maria and Lee. (Source: RAMMB/CIRA SLIDER) It has been nine days since Hurricane Maria blasted ashore in Puerto Rico with 150 mile per hour winds, ravaging the entire island and leaving residents without electricity, food and water. Today, thousands of containers of desperately needed supplies are sitting in ports and warehouses on the island, waiting to be distributed. But the hurricane left Puerto Rico's supply chain devastated. So pharmacy and grocery store shelves remain mostly empty, raising fears that the death toll, now officially at 16, could soar unless something is done soon to get supplies moving out of the ports. Maria's misery was not limited to Puerto Rico, of course. Before coming ashore there, the ferocious storm flattened Guadalupe and Dominica in the Leeward Islands. Then it delivered a second Category-5 blow to the United States Virgin Islands – which had been pummeled by Hurricane Irma just 14 days earlier. And these were not the only hurricanes to swirl through the Atlantic during September. The month has brought five to the basin: Lee, Maria, Jose, Katia and Irma. These storms have set a new record for “hurricane days” — the total number of days each Atlantic storm has managed to stay at hurricane strength — during a single calendar month. As of today, it stands at an astonishing 40 hurricane days. September also brought a new record for accumulated cyclone energy, a measure integrating the number, strength, and duration of individual tropical cyclones, or of all the cyclones over a period of time. Before September has ended, the ACE total for the Atlantic has been the highest for any month on record.

The animation at the top of this story shows three of September's hurricanes — Jose, Maria and Lee — prowling the Atlantic basin over a period of 10 days. It consists of imagery acquired by the GOES-16 weather satellite between September 16th and 26th.  At the start of the animation, Hurricane Jose is moving northward while Maria is gathering strength to the southeast. To the north, Lee is not yet visible. As the animation runs, Jose eventually stalls south of New England on Sept. 21. That night it becomes a post-tropical cyclone. Meanwhile, Maria turns into a monster, barrels across Puerto Rico and then heads to the northwest. And off in the upper right corner, the much smaller Hurricane Lee becomes visible. https://twitter.com/philklotzbach/status/913789930651885569 Meanwhile, the current pattern of sea surface temperatures — cool in the tropical Pacific and warm in the Caribbean – is typically associated with an active period for hurricanes in the Atlantic, according to Philip Klotzbach, a meteorologist at Colorado State University. And just today, he and an associate at CSU issued a sobering hurricane forecast: "We expect that the next two weeks will be characterized by above-normal activity."