Their dance has helped to drive needed moisture into California 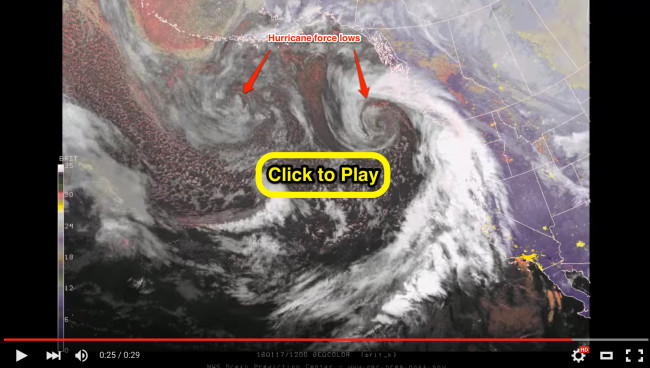 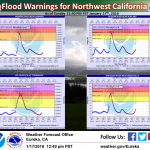 As I'm writing this on the evening of Sunday, Jan. 17, flood warnings are out for rivers and streams in the northwestern part of the state. (Click on the thumbnail at right for a graphic showing predicted flooding on four rivers.) Over the past two days, much of the moisture has come from two hurricane-force low pressure systems that actually did a kind of meteorological do-si-do off the coast. Click on the screenshot above to watch it happen. (And make sure to watch in high definition.) Toward the end of the video, a third system can be seen moving into the eastern Pacific. This one is classified as a mere "storm," meaning its winds are between 55 miles and 72.5 mph (48 to 63 knots) — below hurricane strength. The precipitation impacting the U.S. west coast as of late has been much anticipated, thanks in large measure to the influence El Niño. Here is the latest outlook for precipitation during January, February and March:

Note that big swath of green across California and extending across the southern portion of the country (with a northward bulge into the plains states). Here the odds of above average precipitation are elevated. This looks very similar to the typical pattern seen during El Niño episodes. A new outlook will be issued by NOAA this coming Thursday, Jan. 21.