Before and after satellite images — one pair in natural color and the other in false color — show dramatic shrinkage in snowpack across a large portion of the Western United States centered on Colorado and Utah. In the false color views, snow appears in reddish tones. (Images: NASA Worldview. Animations: Tom Yulsman) On March 18th, I posted a story about the other big drought story you need to pay attention to — not the one in California, which has been garnering most of the headlines but the one that has been afflicting the Colorado River Basin. Since then, I've been keeping an eye on how our snowpack has been doing. And now, at the end of the month, I'm sorry to report that it's not doing well at all. The main culprit: High temperatures — outrageously so in some areas — have been causing premature melting of high mountain snows and early runoff. I made the animation above to illustrate what's happening. It consists of two pairs of images from NASA's Terra and Aqua satellites. The view stretches from the eastern front of the Rocky Mountains on the right to the Utah-Nevada border on the left. (Also included are snippets of Wyoming to the north and New Mexico and Arizona to the south.) I've chosen both natural and false color images to illustrate what has happened. In both pairs, the first image was acquired on March 5th, and the second on March 30. In the false color images, the reddish tones are indicative of snow. In both cases, the shrinkage of the West's snowpack is stunning. And just for the record, our eyes are not fooling us. Some of the biggest declines have occurred in Colorado's San Juan mountains, in the southwestern corner of the state. Here's the data illustrating what has happened there:

That dark blue line for Water Year 2015 tells the sad tale. Why should we care? Runoff from snowpack in the Colorado River Basin in particular — most of which is encompassed in those animations — provides water for 40 million people in seven states. There are two problems this year: thin snowpack and early runoff. Thin snowpack means less water will flow into starved reservoirs like Lake Powell and Lake Mead on the Colorado. And earlier runoff combined with warmer than average temperatures could mean even less water available for farmers and other users toward the end of the summer. In Colorado, the early runoff is following a pattern. According to the recent Climate Change in Colorado report:

The timing of snowmelt and peak runoff has shifted earlier in the spring by 1–4 weeks across Colorado’s river basins over the past 30 years, due to the combination of lower SWE since 2000, the warming trend in spring temperatures, and enhanced solar absorption from dust-on-snow.

For those not versed in the lingo of water in the West, "SWE" means "snow water equivalent," which is a measure of the amount of moisture in the snowpack. As in past years, here's what's causing the early melt off: 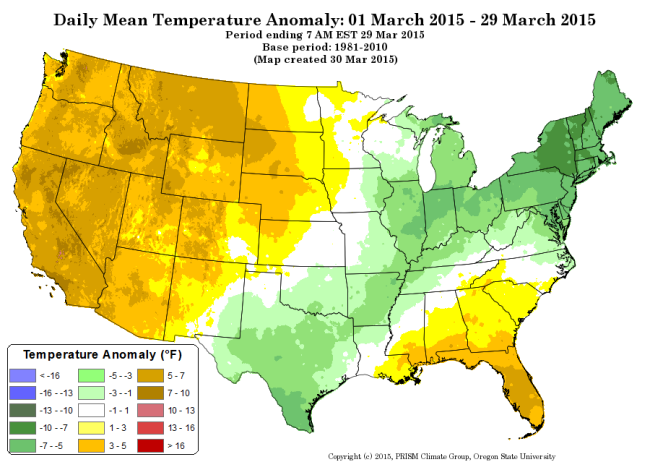 See that big ocean of warm colors in the West? They represent above normal temperatures for the month of March. Here in Boulder, Colorado, we reached near record high temperatures in the upper 70s today. The normal average high for this date is in the high 50s. But for Thursday through Friday, temperatures are forecast to cool dramatically, and rain and snow are in the forecast. I've got my fingers crossed that it really does happen — and that at least some other parts of the West get their share too.