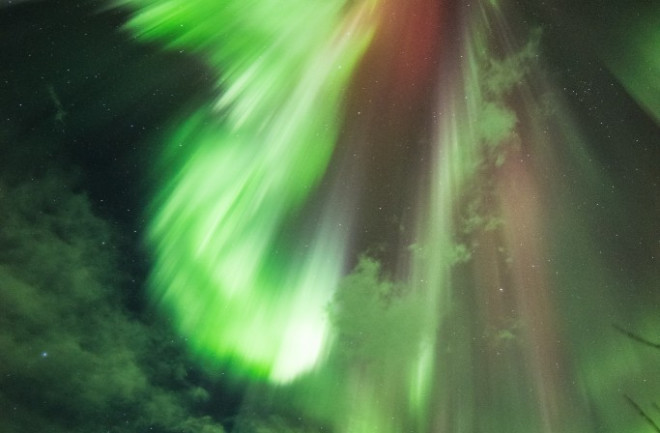 The auroral display at Donnelly Creek, Alaska, photographed at 1:30 a.m., March 17, 2015, by Sebastian Saarloos. (Source: NASA Goddard Space Flight Center) Curtains of hyper-luminous green, white, purple and red light glittered in the skies around the world today as a result of a severe geomagnetic storm caused by two massive explosions on the Sun. These St. Patrick's Day auroral displays started early on Tuesday, March 17th, and they are predicted to continue overnight.

The two eruptions from the Sun, called coronal mass ejections, responsible for the major geomagnetic storm here on Earth on March 17, 2015, are see in this animation created using data from the SOHO spacecraft. (Source: SOHO/Helioviewer.org) The video above, from the SOHO spacecraft, shows the two coronal mass ejections from the Sun, or CMEs, responsible for the auroral fireworks.  These massive explosions of material occurred on Sunday. (The black circle is called an "occulting disk." It blocks out the extremely bright, obscuring light of Sun and its inner atmosphere so that CMEs can be seen more clearly.) CMEs are gargantuan bubbles of gas many times larger than the Earth that explode from the Sun. Threaded with magnetic field lines, Sunday's CMEs traveled across the 92,960,000 miles separating us from the Sun and seriously jostled the Earth's protective magnetic field, triggering the geomagnetic storm responsible for the auroral displays. Today's geomagnetic storm was recorded at the G4 level. This is on a scale that goes from G1 to G5. That makes it the most powerful one since 2013. G4 storms are characterized as "severe" events, according to the Space Weather Prediction Center, and they are capable of producing a good deal of mayhem, in addition to beautiful auroral displays:

Luckily, as I'm writing this post, no significant impacts like that have been reported. So with that comforting news in mind, enjoy these auroral images:

Lots of reports continuing to come in from as far south as Norfolk on the #aurora. But check out this pic from @NASApic.twitter.com/KIOjsbWgzk — Conor McKinney (@conormckinney1) March 17, 2015