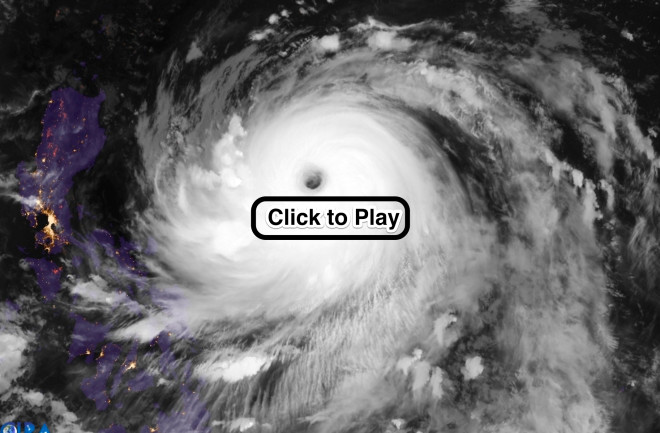 Super Typhoon Haima takes aim on the Philippines between Oct 17 and 18, 2016 in this animation of images from the Himawari-8 satellite. (Source: RAMMB/NOAA/CIRA) In just a matter of hours, Super Typhoon Haima is forecast to cut viciously into the northeastern coast of Luzon in the Philippines. In the most recent update from the Joint Typhoon Warning Center, this huge storm's sustained winds have been pegged at 155 miles per hour, with gusts up to an astonishing 190 mph. Haima is forecast to weaken a bit before landfall. But it will still be a powerful storm with the potential to kill many people. In addition to winds that could flatten homes and other structures, it is forecast to dump 10 to 20 inches of rain in northern Luzon. This will fall on soils already saturated from Tropical Storm Sarika, which crossed the heart of the island last Sunday. That storm dropped 20 inches of rain in places. So the potential for major flooding is high. Click on the screenshot above to watch a stunning animation of imagery from the Himawari-8 satellite, showing Haima bearing down on the Philippines on Monday and Tuesday. To my eye, it takes on the appearance of a gargantuan circular saw as its arms spin around a tightly defined eye. The video shows Haima during both the day and night — and in astonishing detail. The beautiful rendering and seamless transition between day and night is the result of what's called 'Geocolor' processing. The daytime imagery is seen in visible light, whereas nighttime is seen in the infrared part of the spectrum. Geocolor depicts moonlit clouds in white. And nighttime landscapes — such as the Philippines toward the left side of the frame — are rendered in purple, with city lights in yellow. As Haima spins toward landfall, let's hope the storm weakens further, and that damage from this monster typhoon turns out to be much less than predicted.