These intriguing features form regularly in the summer. They may look like mini-hurricanes — but looks are deceiving. 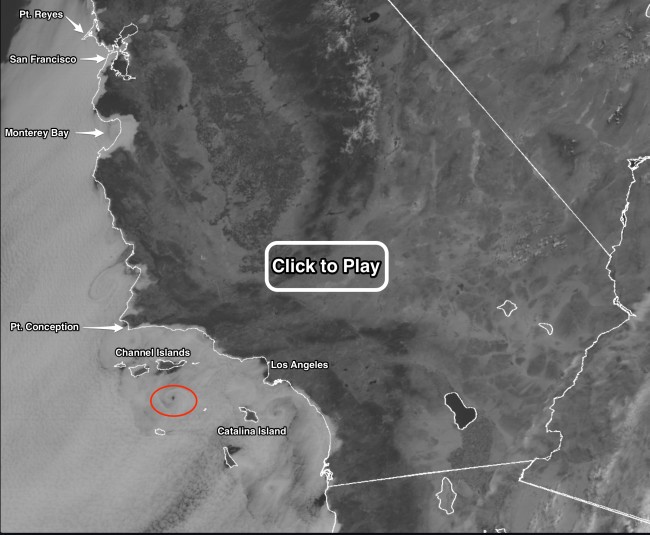 Screenshot of an animation of GOES-16 weather satellite imagery of the California coast from Pt. Reyes to the Mexican border, acquired on July 28, 2017. Please click on the image to watch the animation. (Source: RAMMB/CIRA/NOAA) From an airplane, they can look like all the world like mini-hurricanes swirling the clouds above the ocean off the California coast — whirlpools with eye-like features in the center. Check it out: https://twitter.com/kdcantrell66/status/866462412332990466 But these vortices are actually eddies in the atmosphere, not hurricanes. They often form as winds interact with California's rugged coastline. Watch the animation of satellite imagery above and try to count how many are spinning between San Francisco Bay in the north all the way down to the Mexican border. I've circled one of them in red so you can know what to look for. The imagery was acquired on July 28, 2017 by the new GOES-16 weather satellite, now on its shakedown cruise and scheduled to become officially operational in November. A different satellite, Terra, spied some of the same whirlpools: 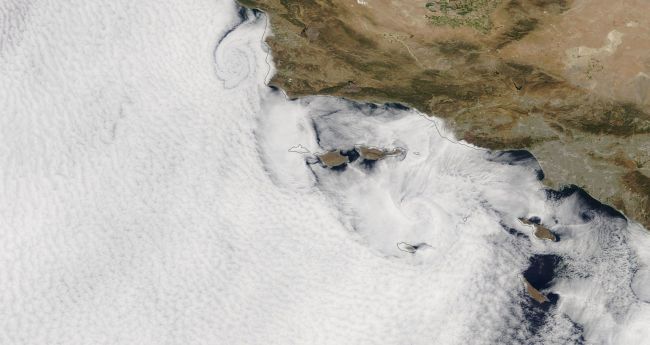 An image of the California coast captured by NASA's Terra satellite on July 28, 2017. (Source: NASA Worldview) Here's an excellent explanation of the phenomenon from NASA's Earth Observatory:

The pattern is known to meteorologists as a Catalina eddy, or coastal eddy, and it forms as upper-level flows interact with the rugged coastline and islands off of Southern California. The interaction of high-pressure—bringing offshore winds blowing out of the north—and low-pressure—driving coastal winds blowing out of the south—combine with the topography to give the marine stratus clouds a cyclonic, counter-clockwise spin. The eddy is named for Santa Catalina Island, one of the Channel Islands offshore between Los Angeles and San Diego.

The eddies tend to form quite frequently in summer. In fact, off the coast of Santa Cruz, research shows that an eddy as broad as 25 miles across forms on 78 to 79 percent of summer days.