WATCH: Landfall of Super Typhoon Noul. Plus: Ana Becomes Strongest Tropical Storm to Hit U.S. This Early in the Year 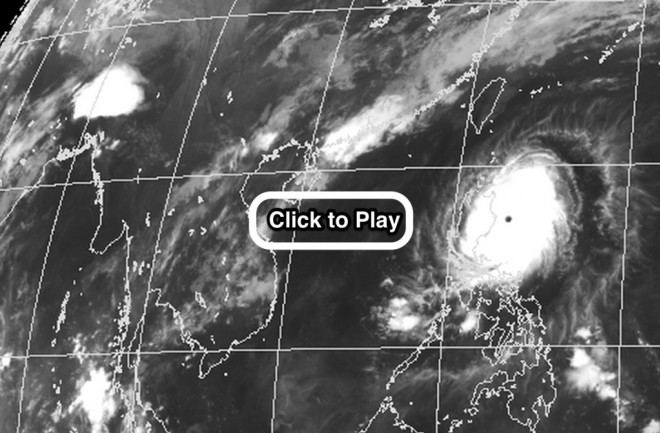 Typhoon Noul made landfall in the Philippines on May 10, 2015, as seen by the MTSAT satellite. (Source: Japan Meteorological Agency) Super Typhoon Noul roared ashore on the extreme northeastern corner of the island of Luzon in the Philippines at about 4:45 p.m. local time on Sunday (4:45 EDT). Click on the screenshot above to watch an animation of MTSAT images showing the storm approach and make landfall before curving toward the northeast and heading back out to sea. In the animation, make sure to check out that dark, clearly defined eye. And for an astounding closeup view, click here to watch an animation of imagery from the Himawari-8 satellite, courtesy of the Cooperative Institute for Meteorological Satellite Studies. The detail visible inside the eye is simply mind boggling. (The resolution is 0.5 kilometers, which means the animation will take awhile to load unless you have a very fast Internet connection.) Noul's exact strength at landfall seems to be in dispute. The Joint Typhoon Warning Center reports that the storm came ashore with sustained winds of 150 miles per hour (130 knots), and gusts to 184 mph (160 knots). But the Philippine Atmospheric, Geophysical and Astronomical Services Administration is reported to have pegged Noul's sustained winds at 115 mph with gusts to 136. Either way, Noul prompted 2,500 people in the thinly population region to huddle in shelters while the worst of the storm passed. I haven't seen any reports of damage and casualties yet.

SEE ALSO Ana and Noul: A Tale of Two Cyclones

GOES weather satellite image of Ana making landfall on the coast of South Carolina on May 10, 2015. (Source: CIMSS) Ana made landfall at 6:15 am EDT (just a couple of hours after Noul stormed ashore) in South Carolina, a little south of the North Carolina border. You can see the storm in the GOES weather satellite image above. At landfall, "Ana had top winds of 45 mph, making it the strongest tropical storm ever recorded to hit the U.S. so early in the year," according to Bob Henson of Wunderground.com.