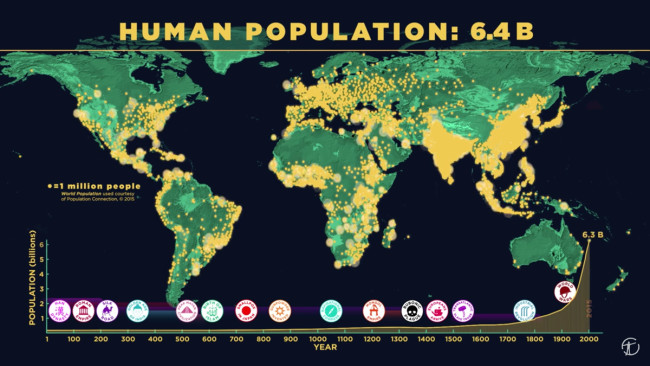 When humans first emerged from Africa 200,000 years ago, we weren't much more than slightly brainier hominids. It would take time for us to distinguish ourselves from the rest of the species vying for dominance over the planet. But once we got a toehold — oh, boy did we take off. Humans leveraged a few key innovations — fire, weapons, agriculture — into the beginnings of an unrivaled global empire. Wrapped up in the crises of the moment, it can be tough to appreciate the sheer scale and speed of humanity's growth. In situations like this, it's best to turn to visuals, like this map and accompanying graph from the American Museum of Natural History. As Motherboardreports, humanity starts slow. Our first tentative steps out of Africa took some 100,000 years, and we spread gradually through Europe and into Asia. When the Bering Land Bridge opened up the Americas around 20,000 years ago, however, the colonization was lightning-quick, a few thousand years at the outside, likely assisted by advances in agriculture. The number of people on the planet rose concomitant with our geographic conquests, barely cracking a million for most of our history, and shooting exponentially upward once we harnessed new technologies. By 1 AD, there were an estimated 170 million people knocking around the planet, and by the 19th century, a billion. From there, the story is well known. Urbanization and industrialization drive growth, and humanity is ascendant. [embed]https://www.youtube.com/watch?v=PUwmA3Q0_OE[/embed] Zooming in on the past 2,000 years makes the sharp increase at the time of the Industrial Revolution even more obvious. The map illustrates the process better than words can. Most striking are India and China, where population densities far outpace Europe and the Americas as far back as the 10th century. The point of the visualization is to show us how quickly modern humans have prospered in relation to anthropologic and geologic timescales. The human population is predicated to reach around 11 billion people by the year 2100, although small divergences from the projection could alter that number considerably. Those people will need to be fed, housed and supplied with energy, and current infrastructure is probably not up to the task. Things like family planning, resource management and the mitigation of climate change will all play a role in determining those global citizens' future. We managed to conquer the planet, but now we have to rule it.