WATCH: Here's the powerful storm that a Royal Caribbean cruise ship literally blundered into — as seen from space 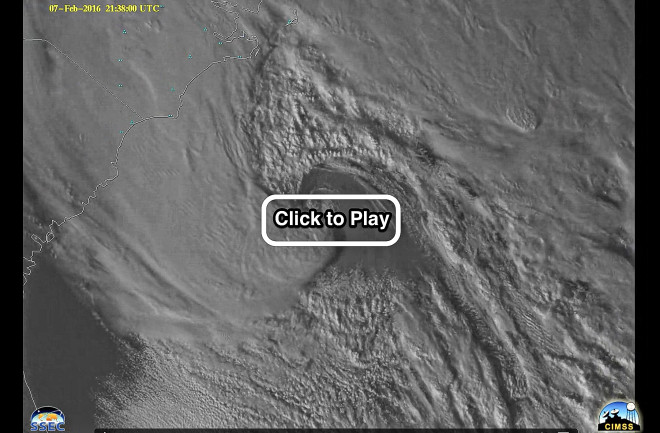 The development and rapid intensification of a powerful cyclonic storm off the U.S. East Coast on Sunday, Feb. 7, 2016, is seen in this animation of images from the GOES-14 satellite. A Royal Caribbean cruise ship sailed into the maw of the storm despite forecasts long ahead of time that it would form. (Source: Cooperative Institute for Meteorological Satellite Studies.) There's a good chance you've heard about that Royal Caribbean cruise ship that negligently blundered right into the maw of a powerful, hurricane-strength Atlantic cyclone on Sunday. (If not, keep reading — details are coming.) Now, click on the image above to watch a spectacularly detailed animation of satellite images showing the development and rapid intensification of the storm off the U.S. East Coast on Sunday, Feb. 7. The animation, originally posted at the CIMSS Satellite Blog, consists of imagery from the GOES-14 weather satellite. GOES-14 actually is a spare that can be put into a “rapid scan” mode in which the satellite captures an image at the speedy pace of one a minute. This is in contrast to its two siblings, which have a much more leisurely pace of one image every 15 minutes. With one-minute imagery, scientists and forecasters can do a better job of tracking the development of weather, most especially a rapidly developing storm like the one that Royal Caribbean's Anthem of the Seas steamed right into. Despite Royal Caribbean's Tweeted claim that the 168,666-ton cruise ship — one of the world's largest — "encountered an unexpectedly severe storm off Cape Hatteras," there was absolutely no reason whatsoever for that to have happened. The following graphic is a forecast for Sunday issued by NOAA's Ocean Prediction Center at 1 p.m. EST on Friday, Feb. 5th — 48 hours before the mishap. It clearly demonstrates that the storm was predicted far enough in advance for the ship to have avoided danger. I've annotated the graphic to draw your attention to two aspects:

The surface forecast for the evening of Sunday, Feb. 7, 2016. (Source: NOAA/OPC) As the graphic shows, a full two days before the ship got into trouble, the forecast for Sunday was for rapidly-intensifying hurricane-force winds. "Royal Caribbean's claim that this was not predicted is bullfeathers," said Al Roker, weather anchor on NBC's Today Show. https://twitter.com/TODAYshow/status/697040057820016645 In a day and age when satellite technology can produce the kind of stunning imagery like that at the top of this post, it's shocking that something like this could happen. Luckily, thanks to the skill of the crew, no one was seriously injured and the ship returned safely to port. But what will that happen next time?

Source: earth.nullschool.net And I'm sorry, but I do have to ask this of the executives of Royal Caribbean: What about the graphic above — a model forecast of winds in the region your ship was sailing into — did you not understand?