WATCH: Chorus Line of Cyclones Marching Across the Pacific

Three tropical cyclones swirl in the western tropical Pacific Ocean, while a tropical disturbance brews in the east near Hawaii. (Source: SSEC University of Wisconsin-Madison) |See updates below | Four cyclones are kicking it up in a kind of meteorological chorus line across the tropical Pacific today. You can see them in the animation above, which I created using imagery from the MTSAT satellite. One of these cyclones, Linfa, is a weak tropical storm. It's expected to make landfall in China early Thursday local time. Click here for the latest forecast track. | Update 7/8/15: The forecast today shows Linfa curving to the southeast, skimming along the Chinese coast, and passing over Hong Kong with estimated sustained winds of about 45 miles per hour. This storm poses a risk of coastal flooding. | Two others are dangerous typhoons. According to the the Joint Typhoon Warning Center, Chan-Hom is expected to peak in intensity at about 130 miles per hour on Thursday and then make landfall in China a bit south of Shanghai — a city of more than 14 million people — on Saturday, July 11. Sustained winds of 90 miles per hour at landfall are currently expected, with gusts up to 115. Of course both the track and the intensity could change over the next few days. In fact, if Chan-Hom strengthens just a bit more than expected, it could attain super typhoon status. | Update 7/8/15: Chan-Hom's forecast track hasn't changed much since yesterday. It is still expected to come ashore near Shanghai. The current prediction is for sustained winds of almost 100 miles per hour at landfall. For the latest forecast from the JTWC, go here. | 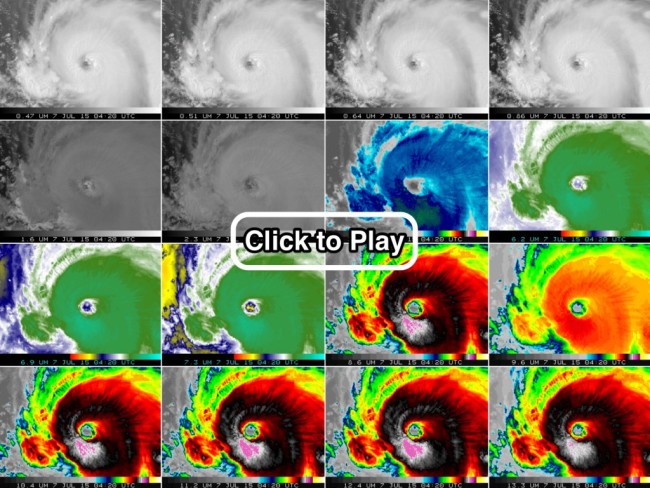 Typhoon Nangka, as seen by all 16 channels of the Himawari-8 satellite, which just became operational. Click to watch animation. (Source: Cooperative Institute for Meteorological Satellite Studies.) Right behind Chan-Hom is Typhoon Nangka. The composite above shows Nangka as it looks to Japan's Himawari-8 satellite. Each of the 16 images shows the typhoon in a particular wavelength of electromagnetic energy, revealing different details useful to meteorologists. Please click to play the animation. It's pretty cool! Nangka has been intensifying rapidly and is forecast to reach super typhoon status in 24 to 36 hours. It's currently tracking northwest, and it's expected to curve more toward the north. Nangka could eventually pose a threat to Japan, but it is too soon to tell. Far to the east is yet another brewing storm in the Pacific Ocean chorus line: a tropical disturbance, designated 96E. The National Hurricane Center gives it a 90 percent chance of developing into a tropical storm later today or tonight. This storm could pose a threat to Hawaii by the weekend. | Update 7/8/15: As expected, the disturbance did strengthen late Tuesday. Now designated as Tropical Depression 4E, it is forecast to skirt a bit north of the Hawaiian Islands. For the latest forecast track, go here. | Several factors have conspired to heighten all of this storminess in the Pacific. These include El Niño and a climatic phenomenon known as the Madden-Julian Oscillation, or MJO. Moreover, all of this cyclone activity could help enhance El Niño conditions. ' Might we be headed for a super El Niño? More about these connections in my next post. So please check back.