Watch California Dry Out Before Your Very Eyes

Just when it seemed the state's scary drought couldn't worsen, it did

An animation of satellite images, one from May 12 the other from June 18, shows the snowpack in the Sierra Nevada mountains melting and vegetation throughout the state turning brown. (Source: NASA) | See update below | More bad news for California from the weekly U.S. Drought Monitor report out today: A state that was already profoundly dry just got even drier. 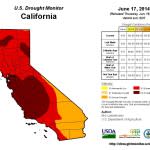 Source: U.S. Drought Monitor Nearly 33 percent of California is now considered to be in exceptional drought — the most intense category — up from a little less than 25 percent last week. (Click on the thumbnail map at right for details.) And the situation may soon worsen further, according to the Drought Monitor report:

Assessments of the situation in California over the ensuing weeks may warrant additional increases in drought coverage and intensity.

You can watch the state dry out over the course of just one month in the animation above. It consists of two images, one captured by NASA's Aqua satellite on May 12, and the other by the Terra satellite, Aqua's twin, just yesterday. First, pay attention to the Sierra Nevada mountain range, just to the west of the big Central Valley. The snowpack on May 12 was already very low — and now it's all but gone. Next, focus on the green portions of the images. Watch the animation alternate between images for a bit. To my eye, large swaths of territory that appeared to be green in May have now turned brown. To be fair, the rainy season in California typically ends in April, and at that point vegetation begins to dry and brown as the warm season progresses. Even so, the browning I'm seeing here seems pretty dramatic. | Update June 20, 9 a.m. MDT: Since I posted this piece I've checked satellite images for previous, wetter springs in California. Much more snowpack is evident in both May and June in those images. That said, significant browning of the landscape as the dry season progresses is evident in those previous years, as it is now. Whether the effect is visually more significant this year than in the past is difficult to discern in this kind of non-scientific comparison. | The severity of what's happening this year is driven home by the Drought Monitor report, which describes the expansion of exceptional drought, known as the D4 category:

. . . from northern portions of the Coastal Range to Mt. Shasta, precipitation since October 1 totaled 30 to 50 percent of normal (deficits of 16 to 32 inches). The corresponding Standardized Precipitation Indices (SPI), which helps quantify precipitation in terms of drought and historical probability, are well into the D4 category. Feedback from local experts as well as updated precipitation data covering the past 2 to 3 years indicated that D4 expansion was warranted across north-central portions of the San Joaquin Valley and environs as well as from Pyramid Lake in western Nevada northwestward into California; water-year precipitation in both of these areas [is] near or less than half of normal (locally less than 40 percent of normal).

Making things even worse is the fact that California has been in the grips of some of the warmest temperatures on record:

Source: National Climatic Data Center As this chart from the National Climatic Data Center documents, January through May has been the warmest such period in a record stretching back to 1917. Now, many Californians are pinning their hopes on a looming El Niño, which could provide some drought relief later in the year. But there really are no guarantees. In fact, if the past is any guide, things could get worse. A lot worse. Earlier this year, Paul Rogers of the San Jose Mercury News reported that "the state has been parched for much longer stretches before that 163-year historical period began." From his excellent story:

Through studies of tree rings, sediment and other natural evidence, researchers have documented multiple droughts in California that lasted 10 or 20 years in a row during the past 1,000 years -- compared to the mere three-year duration of the current dry spell. The two most severe megadroughts make the Dust Bowl of the 1930s look tame: a 240-year-long drought that started in 850 and, 50 years after the conclusion of that one, another that stretched at least 180 years.

Even so, this one is a humdinger. According to Rogers, tree-ring records suggest the rainy season that just ended may have been the driest since 1580. The next thing to watch: wildfires. With all the heat and drought, I'm envisioning the state to be like a pile of dried wood doused with gasoline. Not a pretty thought. Let's hope and pray that I'm wrong.