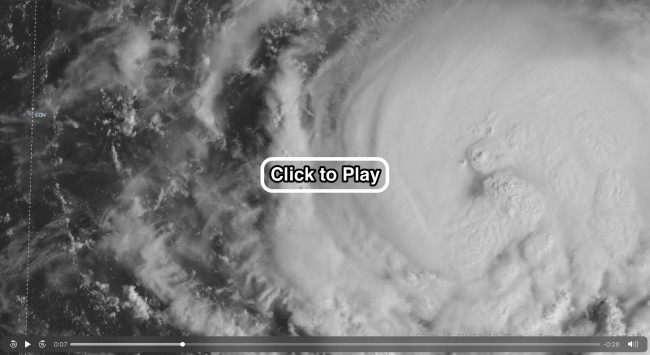 An animation of GOES-16 weather satellite imagery shows Florence strengthening from a tropical storm into a Category 1 hurricane at 15 UTC on Sunday, September 9, 2018. (Source: CIMSS Satellite Blog) After blossoming into a hurricane yesterday, Florence strengthened further overnight into a Category 3 storm this morning with maximum sustained winds of 115 miles per hour. Feasting off the energy from unusually strong sea surface temperatures, Hurricane Florence is intensifying quickly and tracking inexorably toward landfall along the U.S. Southeast or Mid-Atlantic coast on Thursday. As the National Hurricane Center put it this morning:

Florence will be traversing very warm SSTs of around 29C and remain within a very favorable upper-level environment during the next couple of days. These conditions are expected to lead to significant strengthening during the next 12 to 24 hours, and Florence is forecast to be a very powerful major hurricane on its approach to the southeastern United States.

The animation above, consisting of high-resolution images captured every minute by the GOES-16 weather satellite, shows Florence as it strengthened yesterday from a tropical storm into a Category 1 hurricane. The animation comes from the Cooperative Institute for Meteorological Satellite Studies. "An eye structure appeared for brief intervals during the day, but was often masked by cloud debris from a series of convective bursts within the surrounding eyewall," according to Scott Bachmeier in a post at the CIMSS Satellite Blog. https://twitter.com/philklotzbach/status/1038903105419587584 If you live along the U.S. coast from the Southeast to the Mid-Atlantic, you need to prepare for what increasingly looks like a worst case scenario: landfall of a Category 3 or even 4 hurricane. There is the added possibility that the storm will slow after landfall, bringing sustained torrential rainfall and the potential for catastrophic flooding. I'll have more on Florence later today.