A massive sandstorm that began April 1, 2015 on the Arabian peninsula spread over the next five days into Pakistan and India. These images were taken by the Suomi NPP satellite's VIIRS instrument between April 1 and 6, 2015. (Source: NOAA Environmental Visualization Laboratory.) It began relatively modestly as a few plumes of sand blowing out of the northwestern portion of the Arabian Peninsula. Within less than a day, it had transformed itself into a monster. Or, more accurately, a gargantuan "haboob" — a sandstorm that ultimately swept down the entire peninsula and all the way across the Arabian Sea to Pakistan and India. 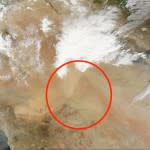 Source: NASA You can watch the progress of the sandstorm in the animation above consisting of images acquired by the Suomi NPP satellite. (The acquisition dates for each image are listed in the lower right corner. Also, the first and last images in the animation pause longer than the others.) For an image showing the haboob's relatively humble beginnings in the northwestern part of Saudi Arabia, click on the thumbnail at right. I've circled the area in question. As it grew and gained force, the sandstorm caused quite a bit of mayhem. As described by the Cooperative Institute for Meteorological Satellite Studies:

The blowing sand reduced surface visibility to near zero at some locations, disrupting ground transportation, air traffic, and also closing schools. Visibility was reduced to 0.1 mile for several hours at Dubai International Airport . . . which is one of the world’s busiest in terms of volume of flights. 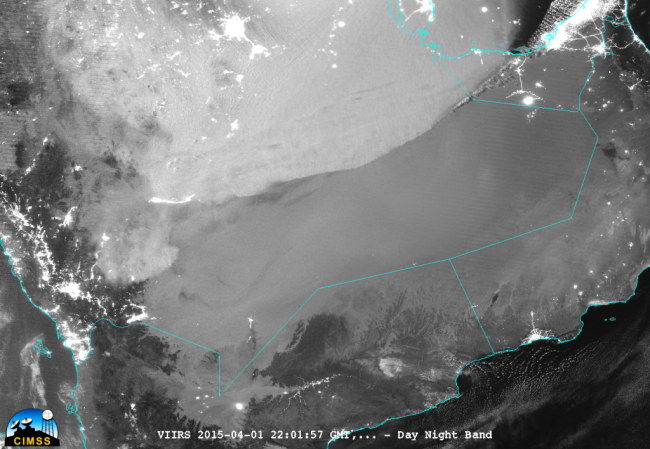 A nighttime view of the sandstorm acquired by the Suomi NPP satellite at 1 a.m. local time on April 2, 2015. (Source: Cooperative Institute for Meteorological Satellite Studies.) A nearly full moon enabled the Suomi NPP satellite to capture the stunning image above of the arc-shaped leading edge of the sandstorm. By this point, it stretched from the United Arab Emirates (on the right) across Saudi Arabia almost to the Red Sea (on the left). The bright lights visible in the image are towns and cities, including Riyadh, Saudi Arabia's capitol, at the top of the image. This image of Saudia Arabia's Rub' al Khali, or Empty Quarter, was acquired on Dec. 2, 2005 by the Advanced Spaceborne Thermal Emission and Reflection Radiometer, or ASTER, aboard NASA's Terra Earth-orbiting satellite. (Source: NASA) The sandstorm swept across Saudi Arabia's Rub' al Khali, or Empty Quarter, seen in the satellite image above. The Rub' al Khali is one of the largest sand deserts in the world, encompassing most of the southern third of the Arabian Peninsula. It includes parts of Oman, the United Arab Emirates and Yemen. The desert covers an area larger than France. Here are some details from NASA's Earth Observatory about the kind of dunes visible in this image:

Large, linear reddish-brown sand dunes alternate with interdune salt flats, or sabkhas. The orientation of the linear dunes lies at a right angle to northwesterly trade winds that originate in Iraq, known as the Shamal winds. Secondary barchan (crescent-shaped) dunes and star dunes—with crests originating from a single point and stretching in several directions—can form atop the linear dunes when southwesterly winds blow during the monsoon season (Kharif winds). The long, linear dunes begin to break up into isolated large star dunes to the northeast and east (image right). This is likely the result of wind pattern interactions and of changes in the sand supply.